While Sarva Shiksha Abhiyan has managed to push centre-stage the key concerns of 'universal literacy' and 'elementary education for all', a spirited pitch for its implementation is necessary to ensure that it does not remain floundering in India's most populous state. Puja Awasthi reports.
18 May 2007 -

A rush of smiling children and welcoming teachers in airy, well maintained schools. The cheerful rattling of figures: 40 new schools a day, 167 lakh free textbooks, 3,16,000 new teachers, 99.89 per cent enrolment and the tagline: Mulayam meri pathshala hai (Mulayam is my school). In Uttar Pradesh's just concluded mammoth seven-stage election, the above was an often aired advertisement, part of the ruling Samajwadi Party's election campaign. And like all hard sells, it concealed more than it revealed.

But first the good news. Sarva Shiksha Abhiyan (SSA), the Government of India's (GoI) flagship programme to meet the education needs of 192 million children, has (since its inception to February this year) seen the construction of 9570 new primary schools and 13,177 upper primary schools in UP. 4832 primary and 1218 upper primary schools have been reconstructed. The number of additional classrooms is 1,21,199 while new toilets stand at 7338. The appointment of two lakh plus teachers and para teachers has brought down the teacher student ratio from 1:66 to 1:45. Set against targets, these are admirable figures in a state where the literacy level stands at a mere 57 per cent. In fact so impressive are these figures that the GoI has repeatedly commended UP as a turnaround state whose grant for the programme increased from Rs.474 crores in 2003-2004 to Rs.2642 crores in 2005-06. (Data from UP Education for All project reports).

These figures also read splendidly in a pan-Indian comparison. Thus, according to the SSA web site, while until September 2006, even India's most literate state - Kerala - made zero teacher appointments UP marched ahead with 2.15 lakh appointments. The key to understanding this, however, lies in the targets, 248 for Kerala and 2.3 lakh for UP. Thus, even after appointing so many teachers, UP must still find another 15,000 more to meet its target. Numbers thus become deceptive.

Former State Project Director, SSA, J S Deepak grants that while the quantitative challenges are being met, the real test is quality. "More than one lakh children are still out of school. These are the most vulnerable: street children, children working in dhabas, brick kilns etc." Even his alarming figure for out-of-school children is at variance with what is quoted in the Ministry of Human Resource Development's report of the Working Group for the 11th Five Year Plan. The report cites an IMRB survey of 2005 that says 22 per cent of the country's 1.34 crore out-of-school children in the 6-14 age group are in UP. This translates into 2.94 lakh. Moreover in 2005-06 the number of districts with more than 50,000 out-of-school children was 48, of which 15 were in UP, only marginally less than the 19 in Bihar. 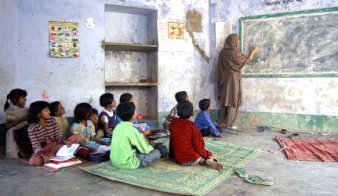 The numbers are not the only worry; there is also great heartburn over what the system is achieving. "The quality of education is not adequate," says Deepak. "The reading, writing and arithmetic skills of our children do not compare favourably with those of children from private schools. There have been mixed results for girls education." In March this year, an unpleasant reminder that almost half of the state's school going children can neither read nor write came in the form of the release of the Annual Status of Education Report (ASER, 2006) facilitated by the Mumbai based NGO Pratham which surveyed 20 families each in 30 villages in the state's 70 districts.

The school construction policy promulgated by the state government has led to pradhans and teachers cornering hefty commissions for awarding construction contracts.

Partha Sarthi Sen Sharma, Assistant State Project Director, SSA points out that the government is handicapped when it comes to making qualitative comparisons. "The SSA has to be focussed on learning but we don't have the figures. How do we compare learning levels with what was prevalent five years ago? This is a critical gap but perhaps it exists because it is easier to focus on numbers. In UP our initial focus has been on access, infrastructure and incentives. These were right when the programme was launched but we now need to shift our attention to other questions such as: Is there appropriate reading, learning material available? Have we made provision for early childhood care and education? Can mother's literacy be linked to SSA?"

These questions do not take away from the fact that there is cause for concern even on parameters where the state has fared well. In October 2006, Shravasti's Basic Shiksha Adhikari (BSA) Vinod Kumar Verma was shot dead when on a routine review of under-construction schools, during which he had pulled up A D Dwivedi, a teacher, for the sub-standard material used and the tardy pace of work. School construction under SSA is the joint responsibility of village pradhans and the headmaster or any teacher of the school, authorised by the BSA. This has spawned a new mafia - of teachers turned contractors, like Dwivedi. The school construction policy promulgated by the state government has led to pradhans and teachers cornering hefty commissions for awarding construction contracts. It has also caused friction among teachers anxious to grab the opportunity to supervise building and construction activities. Unsurprisingly a growing number of teachers are more interested in construction than in teaching.

Om Prakash Sharma, legislative council member and head of the teachers' group in the House shrugs, "Teacher involvement was solicited for quality control. That purpose has been totally defeated as poor quality construction means more money goes into teachers' pockets. The funds are transferred to the bank account of the village education committee (VEC), which for all purposes is a defunct body. The pradhan is authorised to operate the account and there is hardly any accountability. There is an immediate need to change the policy of involving teachers in construction work. The Rural Engineering Services or any other agency should be entrusted with the task."

The repercussions of sub standards construction work echo repeatedly. In November 2005, part of the roof of a school building in Lucknow's Dayaram Purva came crashing down, seriously injuring two students, leading to a flurry of well intentioned announcements on the need to make schools safe for students. Almost one and a half years later, little has changed. A survey by the Basic Education Department earlier this year found that of the money meant for the construction and repair of 70 schools in Lucknow, only 30 per cent had been spent.

Yet there is a huge disconnect between these ground realities and what the government chooses to see. For instance a January 2006 joint review mission of the GoI and the World Bank noted: "With the good buildings provided by the government, efforts may be made at village/block district levels to motivate the community to maintain/beautify the grounds and provide some play materials. Children could also be encouraged as part of the curriculum to create some flower beds and maintain the plants."

Independent evaluation of the programme shows there are more vital concerns that threaten to run the scheme aground. A report on the working of the scheme in Lucknow submitted to the Ministry of Human Resource Development, by the Giri Institute of Development Studies (GIDS), the nodal agency for monitoring and evaluation of the programme in the state reads, "Average number of teachers found present on the day of the visit is one" (against a sanctioned five). A whopping 60 per cent of the teachers were away collecting salaries or involved in government work that had nothing to do with teaching.

Teacher participation in works such as collection of census figures and poll related duties means there is little time for training. The aforementioned survey (which like the five others submitted to the government has elicited no response) points out that only 43 per cent of the sample primary teachers in the state capital have received any kind of training, despite SSA provisions that every teacher should undergo at least 20 days of training. The department's own figures reveal that in the last year only 35001 man days of training was given. Calculated on the SSA paramenter that means only 1750 teachers were trained. And given that only three and six per cent of these have received any computer or library related work training there will obviously not be any miraculous improvements in the quality of the classroom experience.

Meena Sharma, senior professional of the Basic Education Department points out a glaring shortcoming of the training outcomes. "Even where teachers are trained, the teaching learning material (TLM) and activities are discrete and not necessarily an integral part of the ongoing teaching-learning process in the classroom to supplement a given concept or skill. Thus while the TLM might be good, teachers don't use it appropriately. There is a real possibility that TLMs end up as exhibition items only."

Professor Fahimuddin, a senior fellow at GIDS, who is the coordinator for the evaluation and monitoring team says most of the failures of the SSA flow from the fact that it is implemented as a programme and not as a campaign. "As a programme, the only focus is on target achievement. Had it been a campaign there would have been greater involvement from all quarters and more emphasis on quality." Fahimuddin's prescription to strengthen the SSA impact includes: strengthening the VECs, creating awareness for parental participation so that there is a control mechanism, and posting teachers at schools other than the villages they belong to so that local politics do not come into play. To that one may add the need for an urgent mid-course correction to ensure greater focus on quality, a punitive prescription for teacher absenteeism, and performance-linked incentives for teachers in districts where enrolment and retention figures are low.

While SSA has managed to push centre-stage the key concerns of 'universal literacy' and 'elementary education for all', a spirited pitch for its implementation is necessary to ensure that it does not remain floundering in India's most populous state.