In his latest book, The Wisdom of Ants: A Short History of Economics, with numerous revealing historical arguments and anecdotes, Shankar Jaganathan traces how economics emerged from being a relatively obscure field to a structured discipline that may be used to explain the basis for every aspect of human life and society, writes Satarupa Bhattacharya.
10 January 2013 -

What are the most pertinent and current 21st-century challenges in economics? What are the options available to policy-makers today as they struggle to revive the global economy from a persistent slump? Why are teachers paid less than bank peons? Does socialism have a future? How does the Nobel Prize in economics affect the discipline and, in turn, our lives? What is Gandhian economics? Is it even relevant today? Is there an alternative to the Anglo-American economic model of market-based societies?

Academic as most of these may appear, one or all of these questions have nevertheless surfaced in our minds at some point of time or another. Fortunately, there is now a treatise that looks at these issues and seeks to offer insights and answers for the non-economist in a manner unclouded by the esotericism of erudition or complexity of hard-core technical analysis.

In his second book, The Wisdom of Ants: A Short History of Economics, corporate accountant-turned teacher-turned author Shankar Jaganathan provides a fascinating canvas detailing the evolution of the discipline that can help the common reader understand not only the prominent schools of economic thought but also, more significantly, how they touch our everyday lives, decisions as well as current socio-economic realities.

With panoramic sweep, nuanced by the recounting of numerous revealing historical arguments and anecdotes, Jaganathan traces how economics emerged from being a relatively obscure and abstract field to a structured discipline that may be used to explain the basis for every aspect of human life and society - even issues such as marriage, child-bearing and human happiness.

As the author himself writes in his introduction to the volume, "Given (the) increased importance accorded to the economic lens in viewing human life, it is worth examining the factors that have led to this situation." That precisely sums up the motivation behind this conceptually vivid and lucidly narrated account of the history and philosophy of economics - a field replete with its inherent contradictions, resolutions and alternative approaches to addressing a particular problem.

From the title it would appear that there is a behavioral dimension to managing limited resources. Has human capacity been overestimated, that, as we know of human development today, wisdom eludes us in economic matters? -- Joseph George A

Shankar Jaganathan: Dear Joseph, If I have understood your question right, I think you are asking if the current economic thought is based on human wisdom, and you seem to think it may not be. I tend to agree with you when I see the dominant economic thought of the day which is based on market economics. I believe there is an excess focus on self, and reliance on speed reflected in the rate of growth. The dominant view is seeing human life as a 100-metres dash, whereas the contrary view sees it as a marathon, where not only speed but endurance is also the key. If this view is taken growth along with sustainability becomes essential.

An important element of sustainability is the social sustainability, which is anchored on a more equitable distribution of wealth and income. Hence I can see why you may believe the current economic wisdom, as expressed today is an oxymoron.

(Excerpted with permission from a web-chat on IBNLive.com between Shankar Jaganathan and readers)

Jaganathan begins at the beginning with insights into the earliest seeds of economic thought as evidenced in the writings and teachings of leading thinkers across four prominent world civilizations - Greek, Chinese, Indian and Islamic. While the discourse of Aristotle and Ibn Khaldun focused largely on personal ethics and the individuals way of life, Kautilya and Lord Shang brought to the fore timeless rules of public administration. Interestingly, we find that even as these lacked the structural form and tangibility of present-day economic theory, they were far more sensitive to considerations of equity, wealth distribution and social safety nets - problems that the world continues to grapple with to this day, despite the sophistication of economics as a field.

The book presents an intriguing and vivid sketch of the transition from this phase, where promoting personal wealth conceded priority to religious and ethical mandates, to one where enhancement of private property and economic issues earned social sanction and ultimate dominance over all other considerations. Following this train, it becomes easier to discern how and why arguments for pursuit of self- interest culminated in increased trade and exchange across Europe and later North America, and consequently propelled markets to the centre stage of almost all economic discourse.

The Wisdom of Ants would have filled a critical gap in popular economic literature at any juncture, but is especially relevant today as economies around the world struggle to figure a way out of the doggedly persistent slowdown that affects them since the great financial meltdown of 2008.

•  Sen: A life re-examined
•  Economics of need and greed

Jaganathan also devotes considerable thought and space to the exposition of the role that the Nobel Prize in economics has played in the emergence of the market economy. The fact that the award consistently recognised and honoured theories advocating free markets over a period of four decades lent gravity and force to the arguments in favour of Lasseiz-faire. In a November 2012 interview with Tranquebar Times, the author goes so far as to raise the questions: "In a discipline like Economics that lacks the empirical evidence found in physical sciences like physics, chemistry and medicine, did Nobel Prize act as the substitute? Could liberalization and globalization have become the buzz words of the last two decades in the absence of Nobel Prize?"

The Wisdom of Ants would have filled a critical gap in popular economic literature at any juncture, but is especially relevant today as economies around the world struggle to figure a way out of the doggedly persistent slowdown that affects them since the great financial meltdown of 2008. It also puts into perspective for the present generation the continuous yet unresolved debate between demand-side and supply-side economists on the merits of a free market-driven economy versus one with active government intervention to resolve challenges related to inequality and social safety guarantees.

Does the current economic situation in US or Europe or India have any resemblance to historical events? What lessons can today's leaders draw from the past to solve it ? -- Pavan Rao

Shankar Jaganathan:Rapid growth in the global GDP started only around the 18th century. In the three centuries that followed, we have faced recession, that has led to renewed debates in economics. In the 19th century it was between Jean Baptiste Say and Simone de Sismondi. In 20th century between Keynes and Hayek and in the 21st century following the 2008 economic crisis between the Salt water economists and the sweet water economists. I believe rapid growth in an economy can come only by feeding of the society. The growth will continue as along as there is someone to pay for it.

Once a section of the society is impoverished to the extent that their life is threatned the entire economy collapses. This requires subsidies, incentives and stimulus for the society to revive before the economy can flourish. The relationship between an economy and its society is that of a parasite and host. For a parasite to thrive, the host must live. I have dealt with this aspect in the book in detail in chapter 8. Please do go though it and share your thinking. (Excerpted with permission from IBNLive.com)

Almost as a corollary, it turns the spotlight on finding that very critical balance between growth and equality, between individual and social good and consequently, arriving at a more holistic measure of economic progress. The debate on the limitations of Gross Domestic Product as an indicator of economic well-being and its dominance in macroeconomic decision-making is traced from the earliest origins through various evolutions; many unique, easily-comprehensible analogies and examples bring out the layered dimensions of this persistent riddle.

Tracing the various contours and dimensions of economic inequality, the author highlights attempts across global economies to evolve satisfactory measures of welfare and integrate markets with such well-being. This opens up several interesting insights  such as the experience of Nordic economies that have met with a relatively high degree of success in fostering an environment that promotes private wealth creation while maintaining state machinery to enable effective distribution. Significantly in todays world, this could form the basis of implementable solutions in countries where the benefits of high growth are dwarfed by immense challenges stemming from skewed wealth distribution.

Can this (recommendations in this book) be adopted by Govt and and be implemented?
-- Harish Nayak 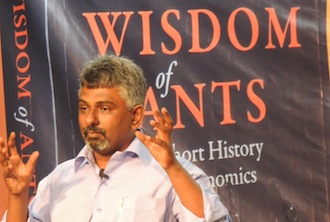 a. Introduction of inheritance tax: India is the only if not one of the few democracies where inheritance tax is not levied. It was withdrawn in 1985. Today India is a land of billionaires and Millionaires and malnutrition kids. India also has the lowest tax to GDP ratio of around 16% compared to the Nordic countries where the tax to GDP ratio is around 50%. So i see no reason why this cannot be implemented.

b. Universal social security nets: In India we have two government sponsored systems that are universal, i.e. where the beneficiary is not decided by any other criteria. They are supply of fuel like petrol and polio drops. Both these are well administered. In the Nordic countries basic social security measures like healthcare and education are also universal. I would like Indian citizens to evaluate the benefits of introducing universal social security nets for all citizens in India. This should be a matter of debate before it is implemented.

c. The third suggestion is to look away from GDP growth as a measure of performance. Instead i propose that we measure the effectiveness of government by looking at the income that accrues to the bottom 20% of the population. This way we will focus not only on growth but also eliminate poverty hand in hand. All the three suggestions are i think implementable. (Excerpted with permission from IBNLive.com)

Does the book provide any new or definite answers for the reader? Not really. But by holding up the historical evolution of these debates shorn of jargon, by elucidating the circumstances that led to their creation and the efforts so far to arrive at some form of consensus, it empowers the reader to distil certain fundamental realities and form his or her own opinion on the key economic questions of the day.

Satarupa Bhattacharya is a Bengaluru-based journalist.