In a twist to the usual practice of digging deep bore wells in search of water, Mohammad decided to try scouring for water horizontally. His success at this unusual method has earned him the nickname 'adda-bore', and many satisfied clients. Shree Padre reports.
20 April 2006 -

Mohammad is an auto driver in Vittal, a small town in Dakshina Kannada district in Karnataka. Each summer, as the mercury rises to its highest levels, he can be found inside wells. It's his unique profession of digging tube-wells that takes him inside dug wells.

This started way back in 1986. In 1983, there was an unprecedented drought all around. Mohammad was impressed by surangas, the man-made caves that have served as water-harvesting structures for long. A man-sized cave is painstakingly dug, and finally the water oozes out from only one or two tiny eyes. Mohammad used to dream about simplifying this process, with a simple twist to that approach; "why can't we dig a miniature suranga, by pushing a pipe into the soil?" This, if successful, would be far cheaper and faster than the suranga. After much thought, he designed a drilling bit, and by joining small pieces of galvanized iron pipes started piercing the soil. And lo, it worked! 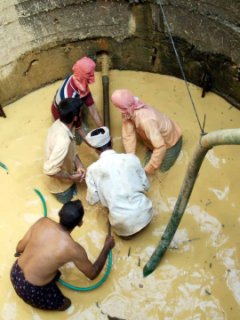 The team puts a horizontal tube well in place. Picture by Shree Padre.

Since then, drilling tube-wells has become a part-time profession for him. Come March, he starts receiving calls from farmers. Generally it takes only one day to dig one or two tube-wells. In the morning, his 4-member team arrives with the necessary equipment in his auto rickshaw, and gets to work. But quite unlike the usual machine-driven vertical bore well that pierces the underground rocky layer and sucks water from deeper aquifers, he starts digging nearly horizontally! This odd technique has proved quite successful, so much so that today, he is better known as adda bore. ('adda', in Kannada, means horizontal) This nick-name of his adorns not only his auto rickshaw, but his visiting cards too.

More often than not, Mohammad's services are required inside a dug-well when the latter is drying up. Generally, he makes an advance visit to the site. This visit has two purposes - to ascertain the possibility of finding water, and to check the practicality of digging a horizontal tube well. Some practical problems cannot be overcome, and the advance visit is to rule those out. For example, if the dug well has knee-deep mud at its bottom, the work of drilling the tube well can't go on. Another potential problem is size; dug wells must be at least eight feet in diameter, or the work area for his drilling will be inadequate.

Once inside the dug-well, the team fixes up the drilling equipment at waist level. Initially, a 4 inch drilling bit is fixed to a 5 feet GI pipe. A detachable handle is fitted to this apparatus to provide a better grip. Within the GI pipe is another half-inch pipe, through which water is directed inwards for drilling. Once the entire apparatus it properly set, the drilling begins. For the water to flow out freely, there must be a small gradient to the structure.

Drilling is not easy. The team has to manually push and pull the drilling unit. Loosened soil gets mixed with the water sent inside and comes out through the hole of the bigger pipe. Once the first 5-feet pipe is almost pushed into place, another piece is fitted to its rear end, lengthening the horizontal tube. The process is repeated until the water is found.

If hard rock comes in the way, the drilling stops. At best, the horizontal tube can go up to 80 feet. Since the drilling charges are affordable, sometimes two, three or even four tube-wells are dug from within a single dug-well. If the client is fortunate, they will find water in all of these. According to Mohammad, "though these water veins are located so close to each other, they aren't usually inter-connected". The water flows vary from a pencil thickness to that of a thumb. To avoid blockage of the water source due to crumbling of soil inside, a perforated PVC pipe is introduced into the hole once the entire horizontal tube length has been dug.

Once the first 5-feet pipe is almost pushed into place, another piece is fitted to its rear end, lengthening the horizontal tube. The process is repeated until the water is found.

Usually, the motor that is already fitted to the dug-well can be used to also lift water flowing from these new tube-wells. In a typical vertical tube well, one has to invariably buy a submersible motor and many bundles of pipes. To draw water from a newly-dug vertical irrigation bore well, a minimum investment of Rs.50,000 is necessary - including drilling expenses, the cost of the motor and pipes, and expenditure on getting a power connection. Compared to that, even if 2-3 adda bores are dug in an open well, only a tenth of that expenditure - Rs.5,000 - is needed. At such low costs, all sorts of things can be attempted. Mohammad has dug adda bore wells even in deep dug-wells of 60 to 75 feet. On a handful of occassions, he has dug such wells across a hill, just like a suranga. Another service he provides is to connect the water flow between two adjoining open wells.

Though Mohammad hasn't kept count, he thinks he would have dug more than 1000 horizontal bore wells in the last two decades. "Failure rates are low", he claims. His advance visits to scout the dug-well for the likelihood of finding water have been very useful; his past experience gives him a pretty good indication of his chances. "Generally, the existence of sweat-like moisture inside the well is an indication of availability of water. Still, there have been cases where despite having no hope that we would find water nearby, I was asked to try my luck. Most of those cases turned into failures."

Mohammad was charging Rs.3 per foot for his bore well when he started this profession two decades ago. Now he charges Rs.35. All other incidental expenditures are extra. Whenever he has no orders, he runs his auto. As he does once the monsoon sets in by June; the heavy rains spell curtains for Mohammad's drilling work for that year.

V S Ganesh Rai is a farmer near Vittal whose water source, an earthen tank is indicative of the step by step decline of water in the last half century."This is a place that till recently was considered blessed with ample water", he points out. During most of his father's time the lands around were paddy fields. The tank water was more than sufficient. Three decades ago, his father raised beetel nut, which requires profuse irrigation for six months a year. To meet the water requirement, they dug a well inside the tank. As the years passed, this became insufficient. They had to deepen the well and put in cement rings. But even this has not been enough; in last two years, the water crisis has raised its ugly head again.

Looking at the experiences of others around him, Ganesh Rai was convinced that vertical bore wells were not permanent solutions for water shortages. He opted for a horizontal bore well. Mohammad's team dug three tube wells in three directions. Each one has a water source of about a cigarette's thickness. 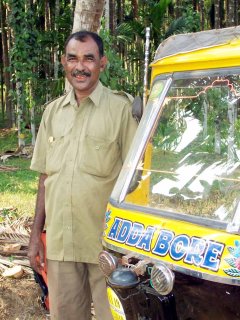 Adda bore Mohammad with his other means of livelihood - the auto-rickshaw. Picture by Shree Padre

Many small farmers have benefited from this water harvesting technique. A water source of 3 inches that he tapped in Gopalakrishna Pailoor's farm years ago, recalls Mohammad, was the best so far. This year, at Vokkeththoor, in Ramanna Shettigar's farm, he tapped another big source - 2 inches in diameter. Wherever groundwater is at higher levels, this type of tube well will likely hit water fairly easily, as in most of Malnad, with its heavy rainfall. Unfortunately, Mohammad's is the only team that is pursuing this profession. So far, nobody has learned these skills from him. "Many people ask so many questions, show interest", Mohammad points out, "but I think it is the inability to identify the water point that keeps them away".

Adda bores are far more sustainable than their vertical counterpart. A good chunk of vertical bore wells have dried up the open wells and tanks in the neighborhood. Since horizontal bore wells usually draw water only from the top layer of the soil, they will attract water from the neighboring one acre area or so. If one adopts groundwater recharge measures in the catchment area, adda bores will last long, just like open wells.

Working at depth his team can sometimes be at risk of running short of oxygen. Mohammad has a few interesting methods to tackle this; he arranges to pour some water from the top 4-5 times in a day, or a lighted paper is let down, or a few wigs of plants are tied to a long stick and waved around. The exact science of such attempts isn't something he dwells on, but he's confident that "such exercises promote air circulation and we don't feel suffocated". Over the years, Mohammad has carried out his own Research and Development with his equipment too. Initially, the tube well was of 2 inch diameter. Now it is double the width. The design of the drilling bit too has been improved. Couldn't some machine come to his aid? "Many times I have thought about this. But it may not work. We can't afford to a machine that emits smoke inside a dug-well. It will risk our lives."

And so he carries on, with a little fix here and a litte retooling there. And along the way, thanks to his innovations, hundreds of farmers have been able to overcome their water shortages. But for his technology, they would have had vertical tube wells dug, paying huge sums in risky attempts to find the life-giving water; worse still, they would have lowered the ground-water table over time. Instead, with Mohammad's help they have a harvester they can afford, and the comfort in knowing that they're not hurting their long-term water prospects. "I have no regrets for the Rs.5,000 I have spent", a smiling Rai was heard saying at the end of the day Mohammad's team finished its work on his farm.