Is Amravati really a 'capital' choice?

The Draft Capital Master Plan of Andhra Pradesh proposing development of the new capital for the state of Andhra is of a deep concern. Debadityo Sinha analyses the plan to show what it lacks and why the plan doesn't augur well for the state.

In June 2014, what led to the bifurcation of Telangana state from Andhra Pradesh also took away Hyderabad, the capital city of the state. As per the Andhra Pradesh Reorganization Act, 2014, over a period of 10 years the hi-tech city will continue to serve as a common capital for both the sister states.

Chief Minister N Chandrababu Naidu, who is known for his ambitious vision was quick to announce on 15 August, 2014 that a new capital will be developed between Guntur and Vijayawada.

On 1 April, 2015, he announced that the new capital named ‘Amravati’ – claimed to be ‘Vaastu-compliant’ – will be developed on the Singapore model. The Andhra Pradesh government hired two Singapore-based consultants Surbana International Consultants and JURONG Consultants to prepare the master plan of the city.

It is also important to note that the official committee (chaired by Retd IAS K.C. Sivaramakrishnan) constituted under the Act on 28 March, 2014 to study various alternatives regarding the new capital for the state of Andhra Pradesh has recommended against the same plan and strongly suggested that the plan of developing VGTM (Vijayawada-Guntur-Tenali-Mangalagiri) area as capital should be revisited.

Land acquisition for the development of the capital has already started through a land-pooling scheme, under which around 30,000 acres of farm land have already been acquired since December, 2014. It has been announced that Prime Minister Narendra Modi has been invited to lay the foundation stone of the capital on 22 October 2015.

Meanwhile, a petition has been filed by a local resident Mr. Pandalaneni Srimannarayana against the state of Andhra Pradesh and the Government of India for protection of floodplains and fertile agricultural lands, which have been encroached upon by the government for the development of the capital city.

The petitioner has also asked for a stay on the land acquisition process until the land is demarcated and a comprehensive impact assessment of all cumulative developments is tabled. The petition is currently under consideration of the National Green Tribunal (NGT).

“The Government of AP said nothing but a plain lie before the court when it denied that the new capital city is being developed encroaching upon the river floodplains, wetlands and thousands of acres of fertile agricultural lands in the region. If what they have planned is followed for the capital, then a huge loss to the environment and ecology is inevitable, also leading to the loss of livelihood of thousands of farmers whose fertile lands have been grabbed in the name of development,” states Parul Gupta, who is arguing the case before the National Green Tribunal at Delhi.

It is, in fact, very clear from recent happenings that the state of Andhra Pradesh is in a desperate hurry to have a new capital and has not shown any real concern over the ecological and economic ramifications of the proposed development of this capital. But what comes as a greater shock is that the master plan which appears to be just a desk review is highly inadequate and lacks scientific basis.

The master plan talks of protecting the ecologically important areas on one hand and at the same time, proposes major developments on the river banks, islands and agricultural lands, as would be seen in the analysis that follows.

Figure 1- Andhra Pradesh Capital City Land use Plan as per Proposed Master Plan. Note that  the red areas signifies hotels and resorts, several of them in islands. 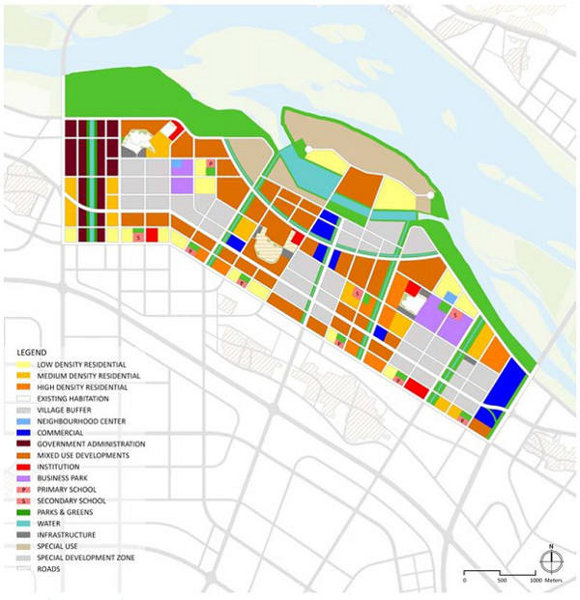 As per the City Land Use Planning Map annexed to the Draft City Master Plan Report published in July, 2015 it can be clearly seen that the ‘Seed Development area’ which is the first area to be developed in the Master Plan and will host the most important government offices and residential complexes is planned to be developed on flood plains adjacent to the main stream of river Krishna. Some portion of this area also falls on islands within the river Krishna.

It is a matter of deep concern that the small islands within the river Krishna are proposed for development of hotels and resorts as can be seen in Fig. 1 (areas marked in dark red).

The Master Plan has also proposed to realign the existing embankment along river Krishna closer to it so that the area can be used for development. The platform of the land (approximately 10,000 acres) is also proposed to be raised a couple of metres, which according to news reports will cost the AP government an estimated Rs 1500 crore approximately. Whether any feasibility study for the same, or even an effective cost benefit analysis, has been conducted is still unclear.

Superimposition of the master plan map on Google Earth clearly shows how the plan is a recipe for disaster, for the Krishna river as well as the surrounding landscape. 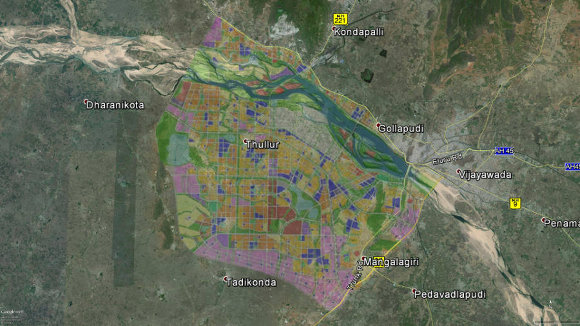 The areas earmarked for the capital area in Krishna and Guntur districts largely consist of very fertile paddy fields. The Sivaramakrishnan Committee Report clearly states that, “the districts of Krishna, Guntur and West Godavari comprises some of the best agricultural lands in the country, contributing more than one percent to the country’s rice production and is often referred as the rice bowl of the country” (Para 3.3.2) and “any attempt to convert agricultural land, much of which is located along the proposed ring road, into non-agricultural use will seriously displace this work force rendering them unemployed, loss of valuable agricultural land, disappearance of small holdings and farmers and benefit only land speculation and serge profit for the real estate operators” (Para 3.3.7).

The Capital Region Plan and Report - March 2015 prepared by Surbana Consultants also mentions that 81 percent of the capital area is agricultural land (Para 2.3.5).

81 percent of the area is flood-prone

The proposed capital city is planned on the banks of the river Krishna which meets the Bay of Bengal 100 km downstream. The area has been declared a flood-prone area and floods are a regular phenomenon in this region as the Vijayawada City Disaster Management plan shows.

Prakasam Barrage on river Krishna is also planned to be included in the capital area master plan. River Krishna itself and one of its tributaries called Kondaguveeti Vagu, both of which are known for heavy floods, flow within the proposed city. The city also includes several canals, such as Buckingham Canal, Eluru Canal, Ryves Canal, Bandar Canal and several small streams.

Together with its own tributaries, Kondaveeti Vagu flows across the Capital City and causes inundation over about 13,500 acres of land every year during the monsoon season. Of  the  13,500 acres  of  the  inundation area,  about  10,600  acres  is  within the planning area of the Capital City. Therefore,  the  Kondaveeti Vagu  flood issue  is  a  critical  issue  that  needs  to be addressed in detail after the master planning stage. (Para 6.2.1) 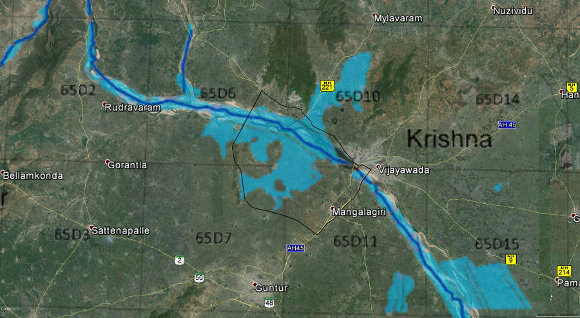 The consultants in their Master Plan have suggested several flood mitigation measures like raising the platform of the area by two metres, increasing the height of the embankment along the river and re-alignment of the embankment closer to the river. They also suggested creation of a network of canals and creation of several reservoirs to work as flood cushion, which will store excess water during heavy rains and be controlled via sluice gates

Interestingly, the consultants suggest those very measures which the City Disaster Management Plan (DMP) of Vijayawada 2011 identifies as reasons behind the increase in floods. For example the DMP blames official development on flood plains as one of the reasons. It also says that embankments create a false sense of security among people due to which they start living along the river bank.

There are enough examples from the past to show how embankments increase flood intensity and why raising platforms could lead to inundation of water within the embankment and walls.

Even the storage reservoirs which are controlled by sluice gates are said to be responsible for flooding as these reservoirs get filled up during incidents of heavy rainfall; when the gates are opened, they release mammoth amounts of water –many times higher than the carrying capacity of the canals and the river – resulting in more intensified floods.

A case in point is the flood scenario of 2009 when the upstream dam Nagarjuna Sagar released water into Krishna and areas surrounding the Prakasam barrage, including Vijayawada.

It is also worth to be noted that Malaria, Cholera, Dengue and Diarrhoea has been stated as common water borne ailments in Vijayawada Disaster Management Plan, 2011 which are common due to inundation of water which continues for a longer period sometimes.

While uncertain rainfall, floods and landslides constitute one of the main concerns as far as the plan for capital development is concerned, other geological and climate factors also cannot be overlooked.

The Sivaramakrishnan Committee also cited geological constraints as one of the reasons that make the place unsuitable for development of large infrastructure. The report pointed out that the water table in this region is high and soil type is vulnerable, due to which there are not many high rise buildings in this area.

The Committee also draws attention to a seismic micro-zonation study of the Vijayawada region conducted by the Geological Survey of India reports that potential earthquakes could result from four neo-tectonic faults located within a range of 150 km from Vijayawada.

Other climatic factors cannot be overlooked. For instance, the Disaster Management Plan of Vijayawada, 2011 noted a high probability of the city being affected by cyclonic storms. 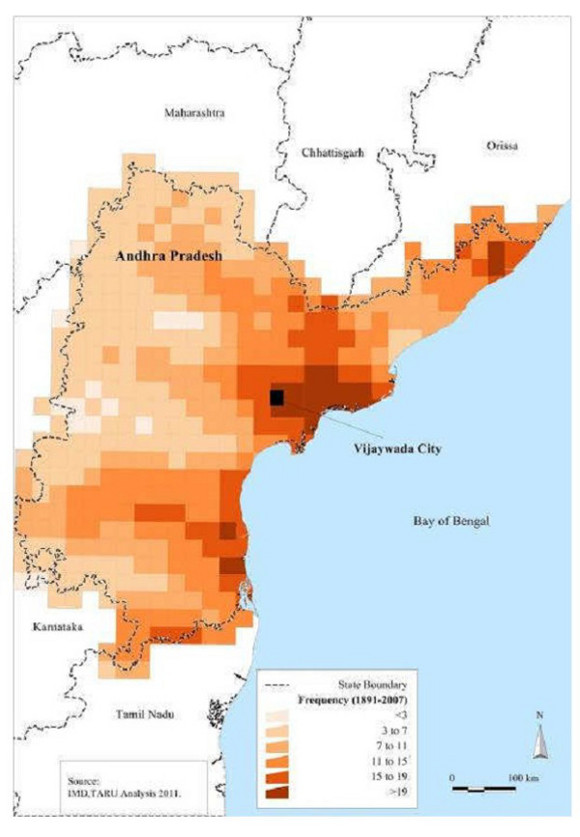 Therefore, in view of the overall climatic and geological factors noted above, it may be well established that the proposed plan is a hurried, ill-thought-out exercise on the part of a government which cannot digest the loss of a city like Hyderabad. The Chief Minister seems to be so deeply hurt by this loss that he is ready to sacrifice anything and go to any extent to develop a city more lavish and luxurious than Hyderabad.

Recently during his visit to a college in Andhra Pradesh he was quoted as saying “With the division of the state, we lost Hyderabad. Now, we will develop a new capital, which would be hundred times better than Hyderabad,” a statement that explains the driving factor behind his actions.

References
Sivaramakrishna Committee Report on Study of Alternatives for the New Capital of Andhra Pradesh:http://www.cprindia.org/sites/default/files/policy-briefs/ExpertCommittee_CapitalAP_Final.pdf

Debadityo Sinha is an environmentalist and activist based in Mirzapur. He is founder of Vindhya Bachao Abhiyanand an independent consultant on environmental issues. He has also petitioned in several litigations related to thermal power plant, dams and river conservation.