Sikkim’s 2400-crore hydro-power scam that no one’s talking of!

The Sikkim government’s irregular allocation of hydropower projects to a New Delhi-based power producer and the eventual turn of events have cost the state more than Rs 2400 crore, according to a CAG report. Soumik Dutta reports on the details of the case and other related discrepancies that have surfaced since.

In Sikkim, hydropower projects, which were allotted without any regard to the laws in existence and without verifying the credentials of the Independent Power Producers, have led to several pending litigations and arbitration cases, apart from huge losses to the state exchequer.

On 23 December 1998, a Notice Inviting Tender (NIT) was published in The Economic Times, inviting offers from parties who could arrange 100 per cent debt for development of the Rolep-I, Rolep-II, Ralong and Chakungchu projects. Eight developers sent their offers along with the New Delhi-based Amalgamated Transpower India Limited (ATPIL).

Offers were opened on 5 February 1999 in the presence of six persons, among whom P K Das, the owner of ATPIL, was then consultant to the government of Sikkim! On 18 April 1999, the work was formally awarded to ATPIL, headed by the same P K Das. The installed capacities of the projects were specified to be 9 MW, 12 MW, 16 MW and 24 MW.

It is not clear what came of that agreement, but in December of the same year, the Sikkim government, led by chief minister Pawan Chamling proposed to raise a loan through the Sikkim Power Development Corporation Limited (SPDC) for developing the Rolep-I, Rolep-II, Ralong, Chakungchu and Bagcha chu hydropower projects.

It decided to raise money through SPDC bonds worth Rs 300 crore for the first three projects, with the state furnishing sovereign guarantee for the same. A bond of Rs 50.01 crore was issued as first tranche, subsequent to which the state government limited its guarantee.

However, since this bond alone was insufficient for project completion, SPDC inked another agreement with ATPIL on 21 December 2002 to get on with the projects. This superseded the earlier agreement (April 1999) and revised the capacities of the plants to 36 MW for Rolep I and II, 40 MW for Ralong and 50 MW for Chakungchu.

However, ATPIL failed to release the government guarantee as agreed upon and blamed the Sikkim government for failing to provide infrastructure such as roads, land and evacuation system. The Sikkim government terminated the agreement on 2 May 2008, while ATPIL filed an arbitration case which is still pending disposal.

Interestingly, in another instance, the Sikkim Power Development Corporation Limited (SPDC) issued another letter of Intent [LOI] in August 2002 to the consortium of M/s Amalgamated Transpower India Limited [ATPIL] and Karnataka Power Corporation Ltd [KPCL], for drawing up an agreement for development of two other projects, Teesta Stage IV [495 MW] and Teesta Stage VI [440 MW].

To begin with, no target date was fixed by the SPDC for drawing up the actual agreement with the ATPIL/KPCL consortium. ATPIL and KPCL failed to come up with any agreement even after the lapse of two years from the issue of the Letter of Intent, while SPDC dilly dallied on the matter. The Letter of Intent was later cancelled in August 2004.

The two projects were subsequently awarded to the NHPC (Stage IV) in March 2006 and M/s Lanco Energy Pvt. Ltd. (Stage VI) in December 2006.

The audit report of the Comptroller and Auditor General of India (CAG) on Sikkim State finances for the year ended 31 March 2009 lambasted the government for the huge loss to the exchequer resulting from the ATPIL allotment and subsequent cancellation.

“The negligence of the power department in fixing a target date for finalizing the agreement and its failure to timely cancel the LOI issued to ATPIL/KPCL and non-exercise of due diligence pushed back development of the projects by a further four years and led to potential loss of Rs 2,437.52 crore to the Sikkim government against the free power receivable from the projects,” the report pointed out.

The Calcutta office of the Central Bureau of Investigation had initiated a preliminary investigation based on documentary evidence provided to it by opposition political leaders from Sikkim, on the alleged massive corruption in all spheres in Sikkim, and disproportionate assets accumulated by chief minister Pawan Chamling and several of his cabinet colleagues.

In the preliminary investigation report that the CBI prepared and submitted to the Sikkim government, ATPIL is implicated as having been favoured unduly in terms of project allotment.  A letter dated 12 October, 2010 from Suman Bala Sahoo, Joint Director CBI, East, addressed to the then chief secretary, T T Dorji IAS, Government of Sikkim clearly states that “undue favour to politically influential P K Das by Sikkim officials caused huge loss to the state.” (Copies of this letter are with India Together.)

In a move which is even more surprising, the Sikkim government has now re-alloted the Rolep-36 MW, Ralong-40 MW and Chakungchu-50 MW hydropower projects, although the arbitration case with ATPIL is still awaiting disposal.

Velankani Renewable Energy Private Limited and Tata Power – two corporate giants are in a tug of war over the ownership rights of these three proposed power projects in the state with a combined capacity of 126 MW.

Tata Power had been awarded the projects on 1 October 2010 through a letter. However, documents reveal that Bangalore based Velankani Renewable Energy was provided with ‘in principle’ approval on December 31, 2010 for the same three projects of the state. The implementation agreement with the Bangalore-based company was to be signed on January 31, 2011 which did not take place due to legal complications. Velankani Renewable Energy filed a caveat petition in the High Court of Sikkim to obstruct its competitor.

Now, Tata Power has threatened to initiate legal proceedings against the Sikkim government in regard to the proposed hydropower projects of Rolep in East, Ralong in South and Chakungchu in North districts respectively. A reminder letter was sent to the State Power department by Tata Power on 24 January 2011, which claims that the Rolep, Ralong and Chakungchu projects had been awarded to Tata power in the first place and transmitted to them via Sikkim Power Development Corporation (SPDC) through the letter written on 1 October 2010.

The same letter also mentioned that Tata Power would provide an aggregate amount of Rs 90 crore as non-refundable upfront premium that would also take care of the repayment of the initial bond along with accrued interest. The company claims that it had been ready and willing to enter into the implementation agreement of this combined project and also deposit the above amount with the Sikkim government.

On the other hand, VN Rathnakar, Director Velankani Renewable Energy expressed his apprehensions over phone to this correspondent over the likely challengers to the letter of intent issued to it by the State Power department. The challengers are ATPIL, Rolep Hydro Electric Power Company Limited, SPS Synergy Solar Limited, Moser Baer and Tata Power, all being companies with which the SPDC had interacted and negotiated for the same three projects.

It is yet to be ascertained whether the State Power department had indeed inked a formal agreement with Velankani Renewable Energy. Former state Power department secretary, Pema Wangchen clarifies the matter, admitting that the projects had been awarded to Tata Power earlier but later the department chose Velankani Renewable Energy for a host of valid reasons. Wangchen stressed that the state allocated the projects to Velankani by following the ‘standard procedure’ of the state government and has not done anything wrong.

The secretary of the Power department, P B Subba informed this correspondent over phone that the department had written to Tata Power on 1 October 2010 stating that their proposal had been approved but they did not come forward with better terms acceptable to the Sikkim Government. The approval was “in principle” and negotiations were still going on; the deal with Tata Power had not been finalized.

During the 64th  Expert Appraisal Committee (EAC) meeting for River Valley and Hydroelectric Projects, constituted under the provisions of the Environment Impact Assessment (EIA) notification of the Ministry of Environment and Forests (MoEF), the committee desired to know about the legal status of the three projects Rolep, Ralong & Chakungchu. 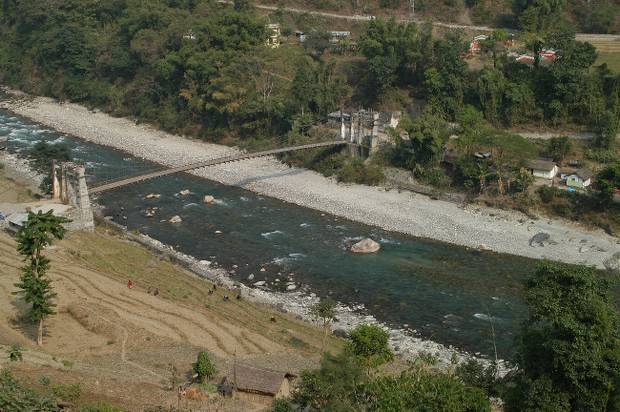 Scenic view of a river in Sikkim. Pic: Energy and Power Department, Govt of Sikkim

This is because the Chairman and Members of the committee & MoEF received a representation from ATPIL. The committee was informed that the MoEF had written a letter to the Energy and Power Department of the Government of Sikkim to inform the bona-fide allottee of the three hydropower projects viz. Rolep, Ralong and Chakungchu.

The Government of Sikkim in a letter dated 7 May 2013 informed the MOEF that the letter of intent for allotment of the projects has been bonafidely issued to M/s. Velankani Renewable Energy Pvt. Ltd and the proposals submitted by them could be considered by the MoEF.

The land vested with ATPIL

Meanwhile Sikkim has been trying to recover the land allotted to ATPIL; the former power minister Sonam Gyatso Lepcha introduced the Sikkim Rolep Hydro Electric Power Project (Transfer and Vesting of Land) Bill 2012-13 to that end, in the Sikkim Assembly in September 2012, which was passed unanimously.

Lepcha stated that the government felt it necessary to bring some legislation to “claim and utilise the landed property with a view to provide for vesting of land leased to ATPIL for allotment, utilisation and implementation of 36 MW Rolep Electric Power Project in public interest and for the benefit of the State”.

It has been considered “desirable” to enact a law for reclamation of entire right, title and interest over the land from ATPIL and to utilize the land for implementation of the said project. The bill is awaiting presidential assent and is pending in the Lok Sabha. As a result, the execution of implementation agreement (IA) is being delayed on account of non-availability of the project land for which the lease deed was executed in favour of ATPIL for a period of 99 years.

The manner in which these irregularities have been perpetuated in the hydropower sector in the state speaks volumes of the culture of corruption in its corridors, but in a country where scams compete with each other for recognition, not all make it to the headlines.