A new mechanical device that makes areca nut harvesting less labour-intensive and hence affordable could solve one of the major problems faced by farmers of the crop. Shrikrishna D reports.

In recent years, labour scarcity has emerged as one of the foremost challenges in farming. One crop that has been most affected by this is the supari, or areca nut. Areca nut trees attain a height of about 60-70 feet. It is mandatory to climb the trees a minimum of five times a year for a successful harvest - twice for the preventive spray against fungal disease, and thrice to harvest the areca bunches. The spraying is done in monsoon, while harvest time is typically in summer.

Only skilled labourers can carry out these farming operations. They have to climb the trees using muscle power. In an acre that has 550 trees, a labourer has to climb a minimum of 100 to 150 trees. As this involves real hard, physical exertion, younger generations of labourers are losing interest, with potentially harsh implications for areca nut cultivation.

Over the last one decade, many farmer-developed spraying devices have been tried but none of them has proved to be very user-friendly. Though regional efforts to make the spraying slightly easier came to the fore occasionally, harvesting areca nut remained a completely manual process - just as it was decades ago.

However, now, 59-year-old Prakasan Thatteri of Kozhikode, Kerala has developed with a successful mechanised harvesting device. With the help of a pulley and rope, this device can be made to climb the tree and do most of the hard work associated with the harvesting of the particular crop.

Prakasan, a retired government employee, is a small farmer. He has been researching this device for a couple of years now and has named it the 'wonder climber.' The biggest advantage of the device is that it rules out the requirement of a person climbing the tree to perform the operations needed. Weighing 6.5 kilograms, it is also easy to lift and carry anywhere on one's shoulders. 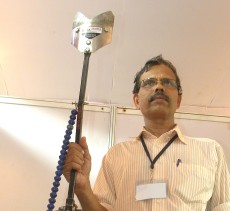 With the help of a pulley and rope, this device can be made to climb the tree and do most of the hard work associated with harvesting.

The device can be fitted to any areca nut tree with the help of two 'U' clamps. Once it has been fixed, the rope may be pulled to get the climber up, where it is needed. Once it reaches the tree top, the blade location has to be adjusted by pulling the rope in the necessary direction. A forceful downward pull after this makes the blade jump up and cut the areca bunch instantly. If there is another bunch ready to harvest, the blade has to be relocated and the process repeated.

There are disadvantages, however. During manual harvesting, the labourers, after climbing one tree, harvest bunches from the adjoining four to six trees using a long bamboo pole with an attached hook. However, Prakasan's climber can only harvest the crop one tree at a time - that is, only from the tree on which it has been mounted. But while this may appear to be very time-consuming, with practice the process can be expedited. Within five minutes, the climber can be fixed to a new tree and hoisted to the top. One can harvest an average of 12 to 20 trees in an hour depending on the height of the trees.

The demonstration of the 'wonder climber' was a big attraction for areca farmers in the Machinery Fair held by CAMPCO (Central Arecanut Marketing and Processing Co-operative) at Puttur last year. Krishnaraj Giliyal, a farmer of Panaje in Karnataka has himself harvested arecanut from a portion of his garden using this climber. "It is okay for a small farmer because with patience one can manage to harvest the crop without waiting for or depending on anyone," he says.

Based on feedback from farmers, Prakasan fixed a couple of anglers beneath the blade. Once the bunch is cut, the anglers hold it there, thus saving the labour required to pick up the fallen and scattered nuts.

Within a few months of its introduction, Prakasan also developed a spray holder attachment that facilitates pesticide spraying through this device. This helps to hold the spray nozzle in it and allows it to be rotated around the tree. Thus, spraying, which was earlier not possible unless a person climbed up the tree, could now be accomplished by anyone from the ground itself.

Rajeshkumar of Mulleria, Kerala bought the climber with a spray attachment only two months ago. "Getting spray workers is becoming increasingly difficult. This year, though we got workers, the rains didn't permit us to get the work done. I bought the device in order to try spraying after the rain had stopped. I had to make some alterations and now it is functioning well," he says. "If a person can complete the work in three days, this might require four and half days. But then, that's okay."

The experience of Prabhakaran Kinaloor is similar. He too had carried out some fine tuning to get the desired improvements from the device. "At the present rates charged by a spray labourer, it costs ten rupees to get someone to climb one tree. In a season, one has to climb the tree five times. Twice for spraying and thrice for harvesting. Even for a farmer with as little as 50 trees therefore, this device is worth buying."

The 'wonder climber' is priced at Rs.6500. The spray attachment comes at an additional cost of Rs.500. At the urging of Prabhakaran, Damodaran Kinaloor, who retired from the health department, has started accepting assignments where he uses this climber. At present, he undertakes only harvesting as his area doesn't require much spraying. Damodaran works part time . from 8.30 to 11 in the mornings. In that period, he harvests areca bunches from 30-35 trees and charges ten rupees per tree.

Prakasan has also started a fabrication unit at Kozhikode employing five regular staff. Till date, around 400 of these climbers have been sold, mainly in Kerala and Karnataka. The possibility of spraying has increased the demand for it, more so because manual labour comes at a very high price now.

The climber has been sold in almost all districts of Kerala, though there are more customers from northern Kerala. After the spray attachment option was introduced, 50 climbers with that option were sold. Agro-service Centres under the Kerala government have also bought a few climbers. A few devices have gone to Tamilnadu.

According to Prakasan, sales in Karnataka has been very slow. So far only 50 climbers have been sold. Points out Ganapathy Bhat Kodimbala, a farmer who uses the device and is now a distributor as well in Karnataka, "Due to the heavy monsoon this year, areca tree trunks have developed a green moss around them. This poses problems for the upward movement of the device."

Says Ganapathy, "The high-yielding varieties develop more moss around it. If you manage to get sunshine for four days at a stretch, the moss dries up and the climber climbs nicely. Since our area has more high-yielding areca trees, this factor has come in the way of the climber's performance, though the spray arrangement functions nicely."

Prakasan gives buyers a DVD along with the climber, with instructions for using the device. He has also developed a website (http://prakasan.com). At present, Prakasan is working on developing two types of coconut harvesters. One is manual. Another would be a mechanical remote-controlled climbing machine. "The manual harvester is functioning satisfactorily. But one demerit at the moment is that it takes a pretty long time. This has to be improved," he says. He is also on the lookout for entrepreneurs who would come forward to commercialise these inventions.