"My name is Minu Bora"

Pursuing a national measurement of the education, Rukmini Banerji reaches Arunachal Pradesh. Through chats and conversations and activities with children, she finds that the map of India is much more than dots and lines on a piece of paper, but also the anxieties and dreams of where we want to be tomorrow.
29 June 2006 -

It is Saturday afternoon late in November. We have just come down from Bomdilla. For a hundred kilometres, the road loops down the lush mountain forests hills until it flattens out the by side of the Jia Bharoli river. Right there, close to the checkpost, on the border of Arunachal Pradesh and Assam, is Bhalukpong. Looking down from the main road at the mass of huts and houses sprawling below, it is hard to imagine that this sleepy place was once in the national news. In 1962, when the Chinese attacked, their army came down from Tibet via Bomdilla, down the road that we had just come, all the way into India as far as Bhalukpong. Today, the village is a scrambled settlement of nomads and migrants  people from different parts of Arunachal, some from Assam, from Bengal, mix of populations, of tribes, languages and histories.

The village lists for ASER 2005 (the Annual Survey of Education Report) were randomly generated from the census list of habitations. In the village list for West Kameng district in Arunachal Pradesh is Lower Bhalukpong - a section of this dusty wayside transit point. Like Lower Bhalukpong, 10,000 villages across the country have been randomly selected for ASER. We are two people and we have two days to understand this village, to learn about schools and schooling, about children and learning and explore what people are thinking about what is to be done about education.

"This ASER, it is happening all over the country? 10,000 villages, all rural districts in the country? And even in Arunachal?" They sound incredulous.

•  ASER and beyond
•  A citizens' audit of education

Where to begin? How should we speak to all these strangers? Will we be able to explain what ASER is? We ask for the gaonburo (the headman) but he is not home. We look for the lady from the zilla parishad but she is out. So we walk to the local government primary school right in the middle of the village. Despite it being late in the afternoon on a Saturday, the children and teachers are still there. Seeing us, teachers gather in a spacious airy room in the center of the low building. The headmaster is not here today. He has gone home to Bishwanathcharali, his home in Assam to get his brother married. But everyone else is here.

The women teachers are curious, some are skeptical; they want to know why we are here; the lone man among the teachers draws a detailed map of the village. "This ASER, it is happening all over the country? Ten thousand villages, all rural districts in the country? And even in Arunachal?" They sound incredulous.

Early next morning, armed with the schoolteacher's map and equipped with what we have learned the day before we arrive at the center of the village. Despite the dirt and dust in the dilapidated neighbourhood, there is a holiday feel all round; music is wafting from the makeshift church, women are leisurely chatting, the sunny breeze blowing through the Buddhist prayer flags. It is Sunday in Bhalukpong.

According to our instructions, we are to divide the village into four quadrants. In each quadrant we are to go to every fifth house and talk to all children in these houses. The first section of houses begins right opposite the school gate. A long wooden verandah with a row of doors. We go up to the door of the first house. A familiar face opens the door  our map-maker schoolteacher. His two shy daughters come out too. Oiled and neatly combed short hair, frocks with belts at the back, they smile as we ask questions  of course they are in school, one in fourth and one in eighth; both in their father's school. Our reading and arithmetic tasks are very simple for them; but they still do them seriously. Of the six teachers we had met the day before, three live right here just opposite the school and all their children are students there too.

Our next stop is a crudely built bamboo house on stilts. Perched on the edge of the elevated verandah, dangling his legs, is nine-year-old Timothy. Frowning with concentration, he strains to read the simple paragraph we give him. He is in Std 3. Children tumble out of the bamboo room behind him and crowd around him as he tries to read While Timothy struggles, his little sister pulls my hand. She must be no more than four. "Can I try?" she asks. I show her the numbers ... different numbers from 1 to 100. The little girl points to each number, thinks seriously for a few moments, and then in a firm quiet voice says "Fourty four, sixty seven, twenty nine" ... 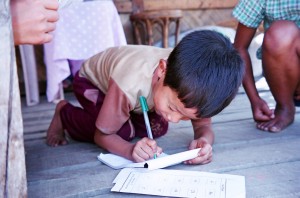 From house to house, family to family, we meet mothers, fathers, brothers and sisters, some literate, some not, some contented, some with dreams, homes that have nothing but still offer tea, empty liquor bottles lying sideways, smell of freshly brewing country liquor coming from doorways, grey worn blankets placed in the sun, well worn sweaters drying on the line, chickens running around, unpaved lanes, potholes with stagnant water, cat chasing a mouse, Buddhist families, new Christians, tribal beliefs, Hindus, children playing cricket, women preparing for a feast. A dusty no-man's land in a forgotten corner of the country ...

But everywhere, everytime, people gather around when children are asked to read or to do sums. In the poorest house in the village, in the schoolteacher's verandah, in the garden of the police constable, there are serious discussions about schools, about learning and about the future of children. Children here read English, they speak to us and to each other in Hindi and then at home speak in their own language. Most people cannot understand the language their neighbours speak at home. There are hardly any children out of school; many children above the age of eight can read, but there are also those like Timothy who are still struggling. Children recognise numbers easily but division sums are hard for several older children. The government school is in the center of the village in more ways than one. On one side is a new missionary school. Between these two institutions, they have reached all children.

By the afternoon, we are well known in Lower Bhalukpong. People are inviting us into their homes and asking us to "test" their children. Each child has is a story, a distinct identity, a combination of current abilities and future potential. In a mud hut in a bylane is a plump eight-year-old with missing teeth. Her mother says, "My daughter's name is Purobi Bora". The girl reads the page that she is given fluently. Then she mischievously runs away. We are still talking to her mother when suddenly from around the corner of the hut, she comes skipping back. Standing in front of us, her arms on her waist, she announces loudly said "My name is Minu Bora"

We have learned a great deal  the huts that we saw from the road are homes, the groups of children playing in the dust have names and characters.

•  ASER and beyond
•  A citizens' audit of education

We have visited 20 households, five from each section of the village, and tested all the children. But beyond what we were supposed to have done, we feel we have chatted with almost everyone. At one end of the village, is a large family of cousins. Everyone's surname is Jebiso. Little Lakisu is not sure how old he is. His cheeks are red, dirty and cracked by the winter breeze. When he smiles, his eyes crinkle shut. Lakisu's cousins think he is seven. He is thrilled to be asked to write. He lies on his stomach on the floor, legs in the air, pencil clutched in his fist, the spelling is not always correct but the writing is confident. Slowly the words show up on the page "My frend is ...".

As we leave, the map-maker schoolteacher is coming home with a bag of vegetables. He wants to know what we have learned. We have learned a great deal  the huts that we saw from the road are homes, the groups of children playing in the dust have names and characters. We know who can read and who struggles with maths, we know whose mother was home and whose father was interested in what children were able to do. We know which teachers teach and who helps children to learn. We have learned that schools can make a big difference; but we have also seen that children learn outside school too.

We all have begun to understand how far the children have come and how far they still have to go. Together, through chats and conversations, through the activities we did with the children, we are all beginning to see how each village fits into the bigger mosaic, common patterns with other villages higher up in the mountains, comparisons with places far away. All of this adds up to the map of India as it stands today. Not just dots and dashes, circles and solid lines on a piece of paper, but also anxieties and dreams of where we want to be tomorrow.

Dr Rukmini Banerji works with Pratham (www.pratham.org). She travelled to Bhalukpong, on the border between Arunachal Pradesh and Assam with her colleague Parismita Singh, to collect data for ASER 2005.