A mother's touch at school

An innovative program of education for young children achieves the twin objectives of encouraging more families to send their girls to school, as well as giving the teachers a greater sense of autonomy over their own lives. Malvika Kaul reports on the Mother-Teacher Programme.
31 October 2006 -

Jaipur - "Hawa chali, hawa chali, peeley rang ki hawa chali" (The breeze blows, it is yellow in colour) ... As Batool Aapa and Sayeeda Akhtar sing these lines, the young children at the Amagarh Bodhshala (community school) lift up yellow toys to show their teachers. Although Batool aapa ('aapa' is a term for 'aunt') is around 70, her energy is that of a 20-year-old. The children, between three and four years of age, are learning colour recognition. As they sing and dance, they also learn new words and shapes.

Amagarh is a slum in Jaipur, Rajasthan. Most of the families here are Muslim, and polish colourful stones to earn a living; these are used in decorations and as jewellery. The school was founded in the early 1990s by Bodh Shiksha Samiti, a Jaipur-based NGO that aims to bring quality education to poor and marginalised children. The school is a result of years of active dialogue and engagement with the communities. The NGO works with rural communities and slum residents in Rajasthan. 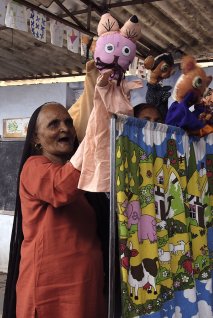 Batool aapa came to the school about 15 years ago. "Initially, when the Bodh team asked me to join their pre-school, I was reluctant. 'I am illiterate, and had never been out of the house. How could I become a teacher?', I asked them," she recalls. For the Bodh team, however, this didn't matter. To them, Batool was the ideal 'mother-teacher' - someone who is connected to her community, knows its traditions, is trusted, and has a way with children.

The Mother-Teacher Programme is an integral part of the Programme for Enrichment of School Level Education (PESLE), initiated by the Aga Khan Foundation (AKF) in India and supported by the European Commission and Canadian International Development Agency. Pre-school is an important component of child development. Worldwide, research indicates that investment in early education is critical - 85 per cent of a child's core brain structure is already formed by age three. This pre-school programme focuses on improving the child's social environment, and in some ways preparing both the child and the community for long-term education. In Rajasthan, Bodh implements PESLE and the mother-teachers are part of its core team at the school level.

Lekha Mohan, who oversees the Mother-Teacher Programme in Bodh, says all the mother-teachers are appointed after consultation with the community. "A mother-teacher is the first link with the child. And a crucial link with the community." Mohan says the idea behind the programme is not only to sensitively introduce schooling to children, but also to empower the women in the process. Some of the mother-teachers are illiterate when they start off, but slowly educate themselves too. "When I came here, I couldn't recognise alphabets or numbers. But after my training in Bodh, I was also inspired to study. Now I can write the next day's schedule on my own," says Sayeeda.

In many ways, Batool's class resembles the classroom of a private city school, offering special care and innovative methods of learning.

After a brief period of training, Batool's first job in her basti was to interact with people on issues like family planning, safe delivery, hygiene and, eventually, education. The first few months were tough - Batool would often find women hesitant to follow any family planning methods; some would cook in the same space where their child had defecated; many families were rigid about purdah and did not want to send their girls to school. But gradually her persuasive powers yielded results - "I couldn't just ask people to change. I had to befriend them first," she says. Some families started sending their children to Batool aapa, the aunt they trusted. Ever since, Batool has been, as she herself says, the "harmonium, tabla, art teacher, puppeteer, nurse, traffic cop and above all, the mother of the children".

In one big room, Batool and Sayeeda (who is about 50) handle about 35 kids between them - Sayeeda works with the slightly older children. "In the beginning, when the children come in, they feel lost. They can only eat or run. We involve them in different activities; create an environment for them to stay for two-three hours without their mother in a school," says Batool. In many ways, Batool's class resembles the classroom of a private city school, offering special care and innovative methods of learning. The children sit in a circle on the floor - this makes it easier for her to give attention to each child.

"When some children don't get tiffin, or get hurt in a fight, we have to take care of them as if they are our children. If they know they have a mother in the school too, they become more regular," says Batool. In fact, both Batool and Sayeeda are responsible for inculcating in children the first important rule for school - regular attendance. "If a child does not come to school, we visit the home and find out what the problem is. Often, we notice that domestic conflict prevents children from being regular. We talk to both parents, individually and collectively, requesting them to resolve their conflict, which otherwise disrupts the child's education. Over the years, many families have responded positively to our suggestions," says Sayeeda. 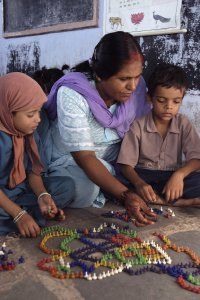 Many women, especially in the rural Bodhshalas, face several obstacles in the beginning. "Their husbands are suspicious and anxious, they themselves are shy and quite confused in the beginning. But a year later, they are different women altogether - confident, assertive and open to change," says Lekha Mohan. She adds that when the community sees the change in a mother-teacher's personality, it is more responsive to change itself. "A teacher has to set an example on her own." Sayeeda agrees: "I got married when I was 14. I was a mother at 15. I didn't know what it was to have a child at that young age. It was so hard. I ensured that none of my daughters got married so early. There was community pressure. My neighbours often commented that my girls were getting old, but I didn't succumb to this pressure. A woman also has the right to see the world. One of my daughters is a teacher. I am confident she will get a good groom."

Gradually, the mother-teacher programme has created a large pool of women who are aware of their own rights and are able to give new direction to their community. For Batool, the biggest achievement is that almost everyone in Amagarh has understood the value of education today. Both Batool and Sayeeda agree that, in recent years, they have also seen more and more women in the basti assert themselves. "More women fight domestic violence now. And many even take their in-laws to court for dowry harassment. Women are changing fast," says Sayeeda, with a glint in her eye. (Women's Feature Service)