A Karnataka district that has been reeling under three successive years of drought may be bouncing back. The state government's top bureaucrat in Bagalkote district led civil society groups in a water harvesting campaign between 16-27 June, just as the monsoon rains had begun. Shree Padre reports.
08 July 2005 -

"Since quite some time, I was reading about Rain Water Harvesting (RWH) in newspapers. But I didn't think it is useful. Now, I am convinced. If only we check the rainwater in our lands, we can solve the water crisis. I am constructing a new house. Yesterday I instructed my son to incorporate RWH in that." 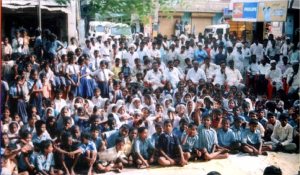 When S S Dodamani, Tahshildar of Beelagi taluk, Karnataka, was voicing this opinion, it was a reflection of a visible change in the mindset of both the general public and officials in drought-stricken Bagalkote district. This change was the result of a 12-day long jalajatha (procession for water), a massive RWH awareness program taken up by the district administration in June. Bagalkote is a new district formed in 1997 in northwestern Karnataka. The district headquarters is the town of Bagalkote. The district has 6 taluks.

Says S Vishwanath, internationally noted RWH activist of Rainwater Club, Bangalore: "The only precedent in our country I can think of for this unique method of spreading the message of rainwater harvesting is that adopted by the Tarun Bharat Sangh in Rajasthan."

Distressed by the severe drought but aware of the potential of RWH, Bagalkote District Collector K S Prabhakar planned a mass action. "Awareness and motivation are two necessities to make the public act", he says. With this in mind, he opened Rain Centre, an information clearing house & training centre with a cost of eight lakh rupees. Long before all other DC's started mentioning RWH, he had it installed in his official residence at Bagalkote town and his own house in Bangalore. "This gave me a lot of confidence. It is a solution for water shortage each one has in his own disposal. No dependence on others", confides Prabhakar.

Bagalkote falls is in a semi-arid region where the farming and farm labour are primary occupations for the people. Food crops are dominant; jowar is one of the rainfed crops here. Other crops are wheat, groundnut, green gram, and bengal gram. Cotton is grown in some parts. With the help of borewells, farmers grow pomegranates in Kaladagi village and nearby for export. Handlooms -- saree and blouse piece weaving -- provide good employment in the district. Ilakal sarees and Guledagudda blouse pieces are famous, but this sector is also is in a crisis. Drought conditions have forced lakhs of farmers to migrate as construction workers or farm labourers in other parts of Karnataka like the Mangalore region, where employment prospects are brighter and there is good rainfall.

Most villages showed luke-warm response to the jalajatha. But after a street-play and a heart to heart discussion that followed, villagers started showing interest. Giving two performances in a day, artists covered 120 villages in 12 days.  •  IIM Kozhikode runs on rainwater
•  Rain barrels for water harvesting

Bagalkote is visited by the southwest monsoon, but the district gets the least rainfall (562 mm) in the state. The last three years were droughts. In this period, Beelagi taluk recorded the least rainfall in one year, at 177 mm. Mudhol taluk had the lowest rainfall for three years taken together, at 321.13 mm. According to the state's agriculture department, total crop loss during three years (2002 to 2004) were valued at a whopping 1500 crore rupees. Eighty villages had to be supplied water in tankers, making the exchequer poorer by Rs 50 lakh in the last one year. (10 lakh = 1 million, 1 crore = 10 million)

With a poor literacy rate (56%) and poverty, the media's reach in the district is limited. But the villagers are stage-lovers and are participants in many professional and amateur drama troupes. Prabhakar made a key decision. He decided to utilize this form of art to spread awareness.

Niranthara Foundation, a group of multi-talented individuals from Mysore was roped in to train the artists and to draw the master plan for a jalajatha. Ten days of vigorous training was given to 60 drama artists to perform street plays exclusively written for the cause and sing songs on water. Not stopping there, these prospective ambassadors of water were given a working understanding of rainwater harvesting through a slide-show and discussions with experts. They assembled a roof water harvesting system for a house, and dug a farm pond to get a first-hand idea. Finally, the 60 artists were split into five troupes.

The timing of jatha  16-27 June - was perfect: the monsoon rains had just begun in the district.

Most of the villages showed lukewarm response to the jalajatha. But after the street-play Water is Lost and a heart to heart discussion that followed, villagers started showing interest. Giving two performances in a day, the troupes covered 120 villages in 12 days. "It was a unique experience", points out Yellappa Metri, one of the artists, "I had done many street plays in the past for social causes like AIDS prevention, adult education etc. But the job satisfaction derived from this is inexplicable." 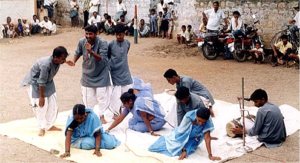 The jalajatha troupe planted few saplings in all the villages. Another laudable aspect is of their self-education and documentation. The troupes enquired and identified some success stories of RWH and traditional soil and water conservation practices and show-cased them. The team would visit the fields, witness and photograph such best practices. "The kind of initiatives and rain-catching cases we came across was really an exposure to me. I was of the opinion that no work was done in the district in this field", confesses jalajatha director Prasad Kundoor of Niranthara Foundation.

In each village, the troupe enlisted volunteers who wanted to harvest rainwater and would carry the torch forward, the jalyodhas. Many times, they had a hard time convincing the locals that this is not a government programme. As usual, the villagers were on the look out for subsidy. "You have seen that the subsidy route doesn't bring you desired results. We are providing you low-cost methods to help yourselves", Mudhol Tahshildar Shashikanth C. Gundakalle was heard re-iterating everywhere.

The programme was not without drawbacks and the shortcomings. First and foremost, communities in the villages werent informed in advance about the correct date on which jalajatha would visit their village. In a few places politicians stole considerable time preaching while youngsters (students) were made to sit for long in scorching sun. But the necessity of water is such that people ignored such irritants.

The procession culminated in a one-day training and inauguration of Maleneeru Sangha (Rainwater Organisation). The hall was packed with about 800 villagers. "The response is overwhelming. We haven't given them transport facilities. All of them have come on their own. Our responsibility has increased; but we will fulfill it", an enthused Prabhakar reacted.

S. Vishwanath who inaugurated the Maleneeru Sangha said later: "It is through such involvement of all art forms can the real message reach the hearts of every individual and every community slowly. When we all become part of the solution then the problem will disappear."

How would the campaign be followed up?

Prabhakar says that under the auspices of the Sangha, monthly experience sharing meetings (jalaanubhava mantapa) would be held. His office plans to bring out a directory of those who have already has success with RWH. Exposure visits to facilitate 'seeing is believing' would be another important activity. "We also propose to produce a video documentary on the successful drought-proofing methods and roof water harvesting success stories under the title best practices'", reels out Prabhakar.

But there has been an unusual twist to this story. The Kannada daily Prajavani reported on 1 July that Prabhakar has been transferred out of Bagalkote. Will it be a still-birth then for such a pioneering mission? Or, will Karnataka's first sincere mass effort to combat drought with water harvesting be allowed to continue under the stewardship of this dynamic officer? At the time of filing this report, clarifications were yet to be made at Bangalore, the state capital. In the meantime, citizens and civil society organisations at Bagalkote have protested against the transfer decision.