Illegal felling, mining, and conversion of forest land into non-forest uses, have all been unchecked here. Repeated hearings in the Supreme Court were ignored by forest officials. Kanchi Kohli reports that the case presents both new opportunities for holistic conservation as well as risk of the Court's orders being flouted brazenly.
18 February 2005 -

As per para 123 of Karnataka Forest Code 1976 it is your responsibility to protect and manage various forests coming under your control. It is also your duty to perambulate all the Reserve Forests and book Forest Offence Cases whereever illicit cutting and removal of trees are encroachment are observed. It is also your duty to ensure that the staff under your control discharge their duties scrupulously and with discipline, besides guiding them in protection and management of forests. But in your jurisdiction large-scale illicit felling and removal of valuable trees and encroachment of forest land has taken place ... If you hadvisited the forests frequently and guided the concerned staff, such irregularities would not have taken place ... Therefore you hereby called upon to explain as why recommendations should not be made to [the] Government to take disciplinary action against you ..."

How did this come about?

It is difficult to track the number of instances when the Mahadayi River Valley has borne the brunt of the non discharge of duties, either voluntarily or under pressure. There have been numerous cases of illegal felling of trees, rampant mining, and conversion of forest land to non-forest use, cumulatively threatening this pristine and sensitive part of the rainforests of the Western Ghats. Numerous letters have been written to both the Central and State governments highlighting the urgency of the matter by local NGOs and concerned citizens. Despite all these, the destruction continued. 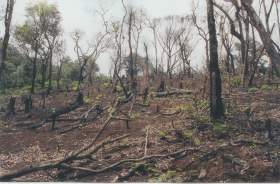 In July 2003, an application (#218) was filed before the Central Empowered Committee (CEC, constituted by the Supreme Court) presenting the case of one extremely sensitive portion of this valley. This portion was once proposed as the Bhimgad Wildlife Sanctuary, comprising of Khanapur Taluka, Belgaum district, Karnataka. The application was filed by Durgesh Kasbekar, who has been working towards mobilising national and international support for the conservation of the Western Ghats.

The area is located north-west to the Mollem Wildlife Sanctuary in Goa and north of Dandeli wildlife Sanctuary in Karnataka. As the application itself states, "This section of Bhimgad that lies in Karnataka reflects the bewildering complexity in plant, animal and bird life. It represents an area having a unique ecosystem that has significant biological and ecological importance. The region has numerous endemic plants and animals and also provides a critically important tiger corridor between Karnataka and Goa."

One of the critical concerns brought out in the application was the impact of these activities on the on the highly threatened Wroughton's Free-Tailed Bat (Otomops wroughtoni). The Barapede caves located in the area are the only known breeding habitat of this bat in the world. Another endangered bat species found in the area is the Theobalds Tomb Bat (Taphozous theobaldi).

The case was heard in January, April and July 2004. However, none of the respondents including the Karnataka Chief Secretary, Principal Secretary (Forests, Environment and Ecology), Principal Chief Conservator of Forests (PCCF), and the Union of India, sent a reply.  •  Diverting a river, west to east

The main demand in this case included action against the large-scale illegal felling, and an immediate stay on non-forestry activity (including plantation of exotic species) within the area. It also asks the Court for measures to stop sale of private lands and the setting up of a committee to investigate the rampant mining in the area. The application also seeks a detailed study on the impacts of the Mahadayi River Diversion scheme, as it would have a detrimental impact on the biodiversity of the area

It is important to note that the Bhimgad area is also referred to quite prominently in the proposal to declare parts of the Western Ghats in Karnataka, Goa and Maharashtra an Ecologically Sensitive Area under the Environment (Protection) Act, 1986. According to the proposal, the ruins of the 380-ft high and 825-ft broad Bhimgad fort (controlled by Shivaji during the 1600s) are located right in the heart of the Mahadayi forest, and is of great historical significance.

The case was heard in January, April and July 2004. However, none of the respondents including the Karnataka Chief Secretary, Principal Secretary (Forests, Environment and Ecology), Principal Chief Conservator of Forests (PCCF), and the Union of India, sent a reply. It was once again heard in September 2004 when the Central Empowered Committee questioned the lack of response from all the respondents. It directed that the area be immediately surveyed and a report on the extent of the illegal felling be prepared by a senior Officer of the Forest Department, undertaken by the department itself.

In the meanwhile, the destruction of the Mahadayi valley continued, which the applicant repeatedly highlighted to the Central Empowered Committee. For instance, the additional submission of 14-12-2004 presents a full list of non-forest activities with details of village name; land record number and the problem at hand. Pictorial evidence was also provided. The Applicant also brought to light the fact that the proposal to declare the area as a Sanctuary had also been shelved by the government.

Following the September 2004 hearing, B.K. Singh, Chief Conservator of Forests, conducted field investigations to prepare the report ordered by the CEC. The inspection was done with the help of local forest officials. Members of the local environmental group Paryavarni, which has been campaigning for the conservation of the Mahadayi valley actively and significantly, helped in the investigation. As part of this, inspection of 6 spots in the jurisdiction of Kankunbi and Khanapur ranges (Belgaum Circle) was carried out. The final report completely supported the issues that were raised in the application. Ironic as it may seem, it was perhaps the facts in this report and not the changing face of the Bhimgad forest that led to the issuing of the show-cause notices in December 2004. 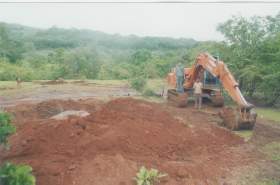 The B.K. Singh report presents some disturbing facts. In Point 7 it states, "on all the four spots, the important tree species like Nandi, Mathi, Kindel, Pansy, Nerale ... have been felled and burnt ... The Deputy Conservator of Forests has reported that Cashew tree and Ragi Crop is grown in the area, which is found to be factually incorrect, as only cashew have been grown and not Ragi. Office Case was booked by Forest Department belatedly, four months after destruction. It is further disturbing to note that the Deputy Conservator of Forests, Belgaum visited the spot for the first time with me on 5.10.2004, even after the allegation was communicated to him on 17.8.2004.

In another observation the report states that some of these prime areas have very good evergreen forests, which need to be protected. Since in many parts the land in question is private (malki) land, the only tool available is the Karnataka Preservation of Trees Act, 1976. This law, however, may itself be questionable, according to the counsel for the petitioner, Ritwick Dutta (Disclosure: The author and Ritwick Dutta collaborate on Forest Watch Update, which tracks developments in the courts related to the nation's forests) since a later Supreme Court ruling in December 1996 suspended the felling of trees in all forest except in accordance with the working plans of the state governments, which were approved by the Central government. On the contrary, the Karnataka Tree Preservation Act continues to permit clear felling so long as it is not on steep and precipitous slopes.

The CEC has in its last hearing directed that the state government will take the necessary action to see that no illegal felling takes place, carry out more investigations on the illegal mining taking place and so on. Meanwhile, the situation on the ground is tense. Local activists and Paryavarni members are being threatened and physically assaulted. In a complaint to the Superintendent of Police, Belgaum District, dated 29th January 2005, Shrihari Kugaji, member of Paryavarni, has mentioned the number of instances of being gheraoed and even assaulted by those with vested interests.

There are some positive developments, now that the destruction of the area has come into the spotlight. The Divisional Forest Officer of Belgaum has been transferred. The State Forest Minister and Principal Chief Conservator of Forests of Karnataka have already visited the area for inspections. Reports from local activists indicate that mining activities in many places have been stopped, although there is still the risk of these beginning again.

There are several issues grouped together in this case. As in many other instances, it raises questions about the limits of judicial power - why even instructions from the highest court in the nation are often ignored, even by minor officials in the states. Second, the petitioner is seeking a more holistic conservation strategy than in the past, but it is not clear whether this needs to happen by judicial order or by legislative intervention and accountable administration. And finally, it is also not clear how the courts or political representatives can rectify wrongs that have been unchecked for so long. The case presents an opportunity to put forward a long-term and sustainable approach to forest management, but first the administrative will to implement the Court's orders will itself have to be proven.