Reasons for the Bt Brinjal moratorium

Barely three days after the conclusion of the last of six public hearings, Minister of Environment Jairam Ramesh slapped a moratorium on the release of Bt Brinjal. Anupama Rao summarises key points from the Minister's note.
12 February 2010 -

Anxious eyes must have scanned through 16 pages of rationale to arrive at the italicized bold font quoting Minister for Environment Jairam Ramesh imposing 'a moratorium on the release of Bt Brinjal till such time studies establish the safety of the product from the point of view of its long-term impact on human health and environment, including the rich genetic wealth existing in Brinjal in our country to the satisfaction of both the public and professionals'. 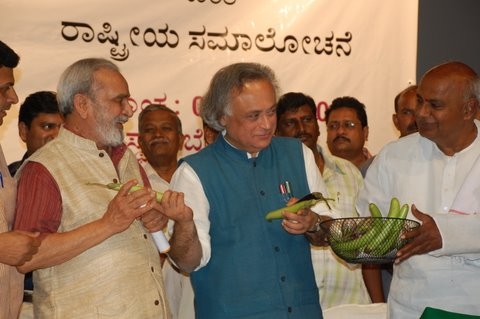 Before the moratorium was imposed on 9th February, at the final hearing in Bangalore on 6th Feburary, the 'No's outnumbered the 'Aye's in favour of release of Bt Brinjal. Critical were voices of the agricultural universities, public sector organizations, Kerala State Biodiversity Board and the Organic Farming Mission of Karnataka. There were also concerns over biopiracy, protection (or lack of it) under the Biodiversity Act, Food Safety Act and Prevention of Food Adulteration Act.

The Minister laid bare all the factors for his decision in his lucid report, and as he predicted the nation is divided into the happy and the unhappy.

Reasons cited by Minister Jairam Ramesh for imposing the moratorium

 There is no over-riding food security, production shortage or farmer distress arguments favouring release of Bt Brinjal, other than the need to reduce pesticide use.

 The apprehensions expressed on and caution called for by Chief Ministers / Agriculture Ministers of 9 states for release of Bt Brinjal, are extremely important as agriculture is a state subject.

 Non Pesticide Management or NPM, a part of the National Mission on Sustainable Agriculture (one of the missions under the National Action Plan on Climate Change) scores over Bt technology as it eliminates chemical pesticide use completely whereas Bt technology only reduces the pesticide spray, albeit substantially. The Minister has in the past also suggested to the Union Agriculture Minister on the need to evaluate large scale replicability of the NPM experiment conducted in Andhra Pradesh.

 The threat of contamination and natural toxins resurfacing is worrisome. In this context, the fact that the safety tests have been carried out by the Bt Brinjal developers themselves and not in any independent laboratory raises legitimate doubts on the reliability of the tests.

 There is a lack of large-scale publicly funded biotechnology effort in agriculture to compete with and countervail Monsantos expertise and capabilities so that it does not jeopardise national sovereignty. Further fingers have been pointed at the manner of funding of the Bt related research in government owned Tamilnadu Agricultural University, Coimbatore (TNAU) and University of Agricultural Sciences Dharwad as well as TNAUs right to transfer products and germplasm to Monsanto.

 India is undoubtedly the country of origin for Brinjal. The National Bureau of Plant Genetic Resources of the ICAR has pointed out the likelihood of diversity loss due to gene flow (also relevant is the experience of Bt-cotton seeds taking over non-Bt seeds).

 The Central Institute of Cotton Research, Nagpur has, in the light of its review of Bt Cotton in India, highlighted the need for development of data regarding pest resistance and strategies for pro-active Insect Resistance Management as well as for resistance monitoring after release, all to be carried out independently.

 Several tests suggested by Dr. P.M. Bhargava and Expert Committee I members were discarded by Expert Committee II (EC II) while evaluating Bt Brinjal. The EC-II report and the biosafety dossier have been criticised from a statistical point of view as well. A National Biotechnology Regulatory Authority which is professional and science-based, independent of the government, equipped to conduct all essential tests with integrity and impartiality is on the anvil but yet to come into being. In the absence of such a body, arguments that have been made on the limitations of the GEAC cannot be ignored.

 Many countries, particularly in Europe, have banned GM foods. Chinas policy is to be extremely cautious about introduction of GM in food crops, even when it has a very strong publicly-funded programme in GM technology unlike India.

 The current standards by which the GEAC has formulated the decision to approve Bt Brinjal do not match global regulatory norms to which India is a party, specifically, the provisions in the Cartagena Protocol on Biosafety, pertaining to public consultations prior to the release of GM food crops and those governing risk assessment, Article 15 of the Rio Declaration on Environment and Development (1992) which echoes the precautionary principle and Section 45 of Codex Alimentarius containing "Guideline for the Conduct of Food Safety Assessment of Foods Derived from Recombinant-DNA Plants".

 Scientists in the USA, France, Australia, UK and New Zealand have written to the Minister raising very serious doubts on the way tests have been conducted in India for Bt Brinjal. 17 noted scientists from different countries have addressed a joint letter to the Prime Minister on February 8th, 2010 giving scientific reasons against the release of Bt Brinjal.

 The Indian Council of Medical Research and the Drug Controller to the Government of India have recommended that chronic toxicity and other associated tests be carried out independently drawing a parallel with independent testing for drugs on human beings instead of relying on developer companies data. Doctors for Food and Safety, a network of doctors across the country have warned of the health hazards related to GM foods in general, Bt Brinjal in particular and the possibility of loss of medicinal properties of Brinjal used in Ayurveda, Siddha, Homeopathy and Unani.

 Dr. Swaminathan, whose research foundation is working on GM technology, has highlighted concern over chronic toxicity and called for credible independent testing of the chronic effects of consumption of Bt Brinjal. Additionally he sees the need for an independent regulatory system and for conservation and collection of India's existing genetic variability in Brinjal.

 The decision on Bt Brinjal also has to take note of the Public Interest Litigation filed with the Supreme Court which is pending response from the Union of India on the steps taken to protect traditional crops. It is also relevant that the Supreme Court has invoked the precautionary principle as a guiding instrument in environmental decisions.

The Bangalore hearing on 6 February

In favour of Bt Brinjal

 Vice Chancellors of University of Agricultural Sciences, Dharwad and GKVK, Bangalore. They cited favourable results based specifically on own studies. Farmers would get seeds 'virtually free of cost' and can save them.
 Balasubramanian (Tamil Nadu Agricultural University, Coimbatore). Cited large doses of pesticidal sprays (citing the Coimbatore situation) needed for brinjal.
 Farmers who favoured Bt Brinjal spoke primarily of their success with Bt Cotton.

•  Where is the science?
•  Understanding the Bt Cotton maze
•  Flaky results, predetermined consensus

Minister Ramesh also countered the suggestion for a limited release for the reason that in a retail market such as Indias it would be extremely difficult and impractical to mandate labeling and monitor limited usage. Other pro-Bt Brinjal arguments that he has deliberated upon also suggest setting up a regulatory authority for governing GM crop cultivation upon release.

Ramesh also cited the development of Bikaneri Nerma (whose seeds can be saved by farmers) by the Central Institute of Cotton Research, Nagpur, as an example for the need to strengthen good public research. He is also equally vocal in the report about encouraging science based companies launched by Indian entrepreneurs.

Vision for the moratorium period

Reiterating his support for tapping the tools of modern biotechnology, the Minister hopes it would aid crop improvement and strengthen national food and nutrition security. He has indicated his interest in harnessing the full potential of GM technology in agriculture and for prioritising introduction of the public sector products. He has however emphasized that there must be no rush with establishing public trust in the very first genetically modified vegetable anywhere in the world.

In his report, Ramesh sets out the need for a fully operational independent regulatory body, a need to evaluate transgenic seeds in the context of the Seeds Bill (awaiting parliaments approval), to strategise public and farmer control over the seed industry, a comprehensive discussion in the National Development Council and the need for a debate in Parliament on the subject.

The to-dos for the GEAC include following up on further tests with appropriate protocols (to be decided in consultation with certain named scientists) and in appropriate laboratories. The Minister further expects the GEAC to engage and interact with scientists, institutions and civil society groups who have submitted written representations.

Meanwhile the GEAC will be renamed as Genetic Engineering Appraisal Committee. The change in emphasis from the approvals to appraisal is there for all to see.

If the public consultations were themselves a novel experience for the layperson, Jairam Ramesh's report that publicly acknowledges the government's duties 'as a measure of our sensitivity to public opinion' elicits appreciation. It was right up there with the best of people-centric acts in our country. Even as we expect effective and even-handed regulation of GM, it will take an informed public to ensure there is no compromise in law, policy or practice.

Anupama Rao is based in Bangalore and is a freelance author. She attended the Bangalore public consultation.