Paddy farmers in Assam's Baksa district are selling their produce at well below the Minimum Support Price, which they find unreliable. The income from agriculture is inadequate, as a result, and they are forced to look for daily wage work. Ratna Bharali Talukdar reports.

It is a bright sunny morning in Tamulpur, in lower Assam's Baksa district, and farmers in Bherakhat village are busy depositing their harvest in one corner of the community paddy field. The villagers are taking turns to carry the harvest. While one batch is engaged in bringing in the harvest, another batch is basking in the winter sun to relax for a while. The farmers look happy with the yield from their community farming plot of 15 bighas (two hectares), on which they grew Bahadur rice, a flood-resistant variety developed by agriculture scientists in Assam.

These farmers, who belong to the Totla Rabha - a centuries-old group of the Rabha tribe, a colourful plains tribe in Assam - are fortunate to harvest a good crop despite less rain this year. The paddy field is yet to be connected to a proper irrigation system. However, they have erected a traditional irrigation system, flowing river water through a canal to their cultivable field.

The paddy, thus deposited after reaping, is ready for threshing. The farmers have already contacted a local trader to purchase the produce from the field immediately after threshing. The farmers of are expecting at least 17-18 maunds (one maund is 40kg) from each bigha. The local trader will transport the threshed paddy to weekly markets, usually to sell it to large traders. The farmers have also negotiated the selling rate, at Rs.480 per maund. This works out to about Rs.1200 a quintal, which is Rs.740 less than the Minimum Support Price (MSP) fixed by the Central Government for common varieties of paddy for 2021-22. 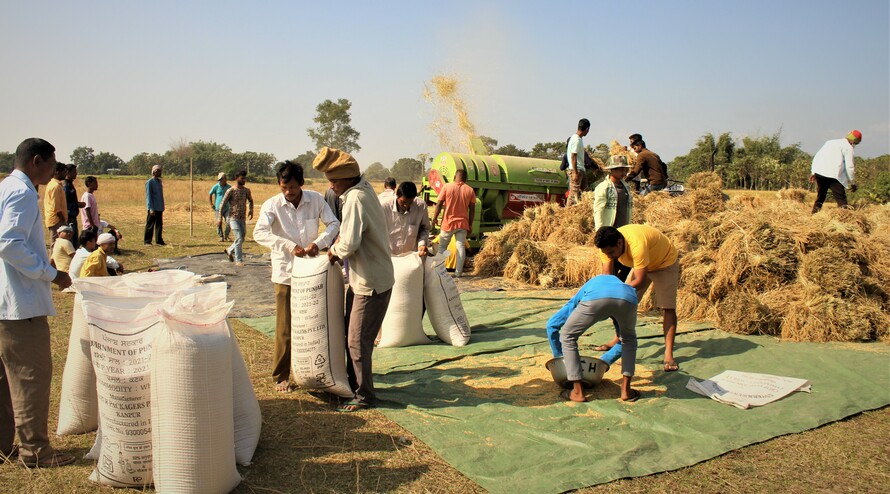 Farmers in Bherakhat village busy stockpiling paddy for sale to their local trader.

The government estimates the cost of production paddy for 2021-21 at Rs.1293/quintal; accordingly the MSP is fixed at 50 per cent above this figure. An official release issued by the Press Information Bureau on June 9 states that the cost of production "refers to comprehensive cost which includes all paid on costs such as those incurred on account of hired human labour, bullock, labour, machine labour, rent paid for leased in land, expenses incurred on use of material inputs like seeds, fertilizers, manures, irrigation charges, depreciation on implements and farm buildings, interest on working capital, diesel/electricity for operation of pump sets etc., miscellaneous expenses and imputed value of family labour."

The farmers expect to earn over Rs.1.2 lakhs from the sale of their paddy. They are also expecting some additional income from the sale of the straw that is produced after threshing. The custom is that the money thus collected is deposited in the village welfare fund. This fund provides soft loans with interest rate of 2 per cent to needy ones of the community during any distress. Apart from this plot of community land, these villagers also have a large community fishery plot of nearly one acre, which is another source of revenue for the welfare fund.

"We have been practicing the custom of community farming for ages. This community fund is a great relief to farmers who are in distress. Farmers in need find it easy to approach us for the community welfare fund," says Mangal Rabha, a farmer. The villagers are poor and do not like the complex procedure of availing loans from government banks, he adds.

As soon as the tractor arrives with the paddy thresher, the farmers get ready with large steel bowls besides jute and poly bags to collect rice grains. One group gets busy feeding the harvested paddy, one group in collecting the cleaned rice grains coming out of the thresher while another group filling the bags. When the work is over, farmers will have a feast in the field. "For cultivation in this community land, we do not engage paid labour. The only cost is tilling the land with a tractor, The rate is Rs.300/ per bigha. We also have to pay another Rs.300 per bigha for threshing", Rabha says.

Despite a good harvest in their village community land, for many farmers life is not so pleasant. Most of them are poor and marginal having tiny plots of agriculture land ranging from less than a bigha to 10 bighas. Only one of these 77 households has 21 bighas of land. They can opt for mechanized husking only for the plot of community farming. For their individual cultivation, they cannot engage mechanized husking as cost involved becomes an additional factor of rendering paddy cultivation non-remunerative.

With successive lockdowns during the Covid-19 pandemic, which have had a tremendous impact on their earnings, almost all of the farmers are in debt. Most of them have had to borrow money to meet the costs involved in growing crops. Major costs include hiring the tractor for tilling and engage additional agriculture labour, if needed. Now, it is farmer's turn to return the money with interest from whatever they get from the cultivation.

These farmers are ignorant about agriculture loans, provisions for crop insurance and minimum support price. It was an election assurance of the Assam government, which assumed power in May this year, to procure rice from farmers at minimum support price by different state agencies. The state government has also been assuring farmers of its commitment to compel Food Corporation of India to procure rice from them at the notified Minimum Support Price.

The Assam government's cabinet has allocated Rs.200 crores to procure paddy from the farmers through the Assam Agriculture Marketing Board  (AAMCB) and a few other agencies during 2021-22. The trend of procurement from farmers, however, in not encouraging. In 2018-19, the AAMCB purchased only 3822 MT of rice against the target of 17,500 MT, while in 2019-20 it procured 5892 MT against the target of 25,000 MT.

In Baksa district 81.9 per cent of the farmers are marginal, 14.6 per cent are poor, 2.2  per cent are marginal and only 1.3 per cent of farm families are large farmers, the HDR Assam Report states. Farmers of Bherakhat village say their crops ensure them only one square meal a day. They will soon have to leave the village in search of daily wage jobs to meet their household needs. This is why they are willing to sell the harvested crop as soon as possible at a low price, so that they can go out looking for jobs. The daily wage rate for most jobs is Rs.300.

Baksa is one of the four districts of Bodoland Territorial Region which is governed by Bodoland Territorial Council (BTC), which enjoys autonomy under the Sixth Schedule of the Constitution.  A large part the local revenue circle (Tamulpur) shares an international border with Bhutan. The Daranga gate of the India-Bhutan international border, which is a mere 15 km from Bherakhat village, has been closed since the first wave of the Covid-19 pandemic. It was easy to find daily wage jobs when the Border gate was open, and movements of people and vehicle was free. With Bhutan deciding to close the gate for such a prolong period, the cross-border trade, both formal and informal has suffered. This has deep impact on life of common people.

In Natun Hauli, a nearby village, Uttam Kumar Rabha is busy with his wife Sinu Rabha in harvesting his crop. Throughout his life, he's worked as a teacher in the village's Lower Primary School without a regular salary, in the hope that someday his post would be regularised. He tried hard, but finally retired from the school last year at the age of 60 without seeing his position regularised. He is now 61, and to support the family he has to look for daily wage work when the crop season is over. The family has five bighas of agriculture land, in which they cultivate Bahadur and two other indigenous rice varieties - Bunni, a steaky rice variety to prepare traditional delicacies, and phul-pakhori. The poor family cannot engage paid labour, and the entire family must work in the fields.

"The local traders give us only Rs.480 per maund. It is even difficult to get a pair of school uniforms with that money. So, I am bound to go for daily wage-earning jobs, though my age does not permit it", he says. With so much hardship, most of them do not want to enter into the complex process of selling surplus produce under the MSP system, which is inconvenient to these tribal farmers. Farmers also do not want to go for multi-cropping system as agriculture has become non-remunerative, Rabha says.

Uttam and his wife have four children. The eldest son works in a private company in Bangaluru. His elder daughter is married, but the formalities as per the Rabha customary law are yet to be completed due to paucity of money. The family is expecting to complete the formalities with the money the eldest sone sends from his income. Almost all the families have a similar story to tell - of sending one of their children, mostly sons, to work outside the state in jobs in the private sector. The Rs.3000-4000 a month that the young men send home each month is a great relief. Without it, these families would quickly slip even further back.

Ratna Bharali Talukdar is a journalist and creative writer. She is the Executive Editor of nezine.com. This article is made possible through reader support for India Together's development journalism fellowships.