As the fresh sowing season starts, beleaguered cotton farmers, already steeped in debt, are being forced to opt for the more-expensive Bt (genetically modified) cotton. Inputs dealers in Vidarbha say that there is hardly any non-Bt hybrid variety available in the market this year. Jaideep Hardikar reports.
02 July 2007 -

Nagpur - When the Prime Minister Dr Manmohan Singh visited Vidarbha last July, the Vidarbha farmers hoped bad days were coming to end, their destiny would change. Skeptics had warned the region's agrarian economy, which has collapsed totally, could not be resurrected with piecemeal packages. They were right. The relief is turning out to be a mere band-aid, as it indeed was meant, with policies remaining unchanged on all fronts  credit, seeds, prices and imports, to name a few.

But, as the fresh sowing season starts, worrying signs are already evident. Beleaguered cotton farmers, already steeped in debt, have little choice but to opt for the more-expensive Bt (genetically modified) cotton this season.

Inputs dealers say that there is hardly any hybrid variety available in the market this year. "We get good margins on Bt from the companies. Also, the companies haven't marketed hybrids this time around." To be frank, says one dealer, "we are not keeping non-Bt seed, for it has no future." 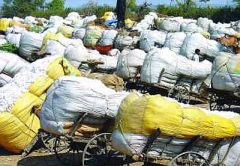 Estimates indicate entire cotton area to be under Bt, results of which have been very discouraging for the rain-fed region. Divisional Commissioner (Amravati) Sudhir Goyal says this year would be a 100 per cent Bt year. Meaning, nearly a 100 per cent cotton area would be occupied by Bt cotton.

While cotton prices are crashing every year, a total shift to the genetic modified cotton will hike up production costs, leading to a steep risk of heavier losses, farm activists say. The central problem is that India provides no cushion to millions of farmers from the risks involved. When hybrid seeds were introduced, they wiped out desi cotton. Now Bt cotton would wipe out hybrids and farmers would be left with no choice but to buy expensive Bt seeds.

The top scientists at the Central Institute of Cotton Research (CICR) fear it is a signal for disaster, which will be accentuated many times if monsoon fails. For one, only three-per-cent cotton area in Vidarbha has protected irrigation. Two, Bt cotton is highly capital intensive. In a region where income levels of farmers have been steadily dwindling, any exposure to risk could be suicidal. The chief minister, who is advocating that farmers practice yoga and spiritualism, could do well to regulate markets and ensure fairplay by the seed companies.

After Bollguard-I (first generation Bt), Monsanto has introduced in the market Bollguard-II in more or less the same genotypes (varieties). The price of a 450-gm packet of seed is Rs.1350, several times the cost of non-Bt seeds. A package of Bollguard-I comes at Rs.750. A packet of same quantity of non-Bt will come at Rs.400-450, while the desi cottonseed, grown in very few areas, costs Rs.50 a kg.

Farmers' leader Vijay Jawandhia argues, "Bt cotton has not brought about any increase in productivity. Also, it has not reduced the use of chemicals." Last year, with 60 per cent area under Bt, the production of cotton in the state could only match the average annual production  about 190 lakh quintals.

The Maharashtra Agriculture Minister, Balasaheb Thorat, recently admitted that Bt had failed in Vidarbha and cautioned farmers not to sow it.

State government reports and statistics too suggest that Bt cotton has not brought about any rise in productivity or decline in pesticide use. In 2005, Maharashtra's Agriculture Commissioner wrote in his note to the central government and later the National Commission of Farmers about the poor performance of Bt in the state. Also, Maharashtra government has in four years paid to farmers about Rs.400 crore in compensation due to the failure of Bt cotton in Vidarbha and other parts.

Suman Sahai, Convenor of Gene Campaign, New Delhi, says: "The only long term feasible and sustainable approach to controlling pests in cotton would be not the Bt gene but a long term integrated pest management approach."

An estimate suggests that over 30 lakh packets of Bt cottonseeds would be sold this season, enough to cover well over ten lakh hectare farms in the region. That's more than a double-fold rise in the acreage over last year, officials point out. A disaster of unmanageable proportions is on the cards if there is any fluctuation in monsoon, fears Kishor Tiwari of the Vidarbha Jan Andolan Samiti. So far, rains haven't betrayed the farmers, but as the entire Vidarbha reels under inclement weather, some areas are staring at first sowing being washed away.

Already, the farm suicides in 2007 are nearing 500. Tiwari laments that a cotton farmer commits suicide every six hours in Vidarbha, and the rate has been picking up alarmingly, pooh-poohing the government claims that the suicides in Vidarbha have declined due to the implementation of special relief packages.

Interestingly, the Maharashtra Agriculture Minister, Balasaheb Thorat, recently admitted that Bt had failed in Vidarbha and cautioned farmers not to sow it. "We will introduce new crop patterns for every district in the entire state," Thorat said after a Kharif review meeting in Nagpur earlier in May. "We want Vidarbha farmers to shift to soybean," the minister proposed, "because the prices are good and cultivation is cheaper." But it's too late, and the damage is done.

Also, farm activists point out the government-run Mahabeej seeds corporation is itself marketing Bt cottonseeds to inputs dealers, while the minister advises caution. There is a lot of double-speak on the part of the government, charges Tiwari.

Yet, what's concerning activists is the permission granted to nearly 53 new genotypes of Bt cotton by the Genetic Engineering Approval Committee (GEAC). As many as 35 of those varieties would be introduced in the central India.

Over 60 Bt varieties are already in the market here and few more are on the anvil. But there's hardly any study on the performance of new genotypes in Vidarbha. "We don't yet know whether these varieties will suit the agro-climatic and soil conditions; moreover releasing the second generation Bt (Bollguard II) for a wide spread commercial use is surely disastrous," says a senior CICR scientist, speaking under condition of anonymity. He also warns that it is only a matter of time before the widespread emergence of resistance in bollworms. "It has already happened in Gujarat, where bollworms have developed resistance to Bt."

Peasants' confusion is only being compounded by the introduction of new varieties this season. As companies compete for greater market share, they are promoting their brands fiercely and relentlessly, and farmers are being exposed to greater risks.