Farmers in Datodi village in Yavatmal, Maharashtra, turned to sugarcane when the Chief Minister, Vilasrao Deshmukh, called on the debt-ridden cotton farmers of Vidarbha to shift to the sweet cane last year. They are now paying the price, reports Jaideep Hardikar.
30 May 2007 -

Yavatmal - Panjabrao Jagtap was attuned to the cotton woes. But the 45-year-old farmer in Yavatmal's Datodi village has just tasted the bitterness of sugarcane as well.

"I burned all my standing crop because there was no buyer for it," says a flustered Jagtap. He set ablaze over 200 tonnes of his standing sugarcane crop a week ago, shouldering huge losses. His only hope wrests on government compensation.

Close to 1500 tonnes of sugarcane remains uncut on the land of Datodi farmers. It will all wilt in the flames over the next week. They've no option but to burn it.

Across Maharashtra, especially Marathwada, estimates from the Sugar Commissioner's office in Pune and various other independent agencies suggest that an overproduction of sugarcane is crushing farmers. Roughly 50 lakh tonnes of cane is uncut and uncrushed. Farmers are in dire straits. 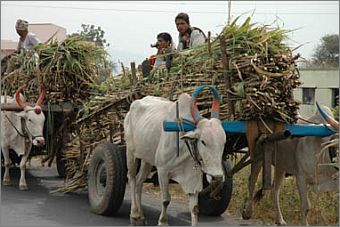 Datodi village, located in the catchments of two rivers Painganga and Arunavati, turned to sugarcane when the Chief Minister, Vilasrao Deshmukh, called on the debt-ridden cotton farmers of Vidarbha to shift to the sweet cane last year. They are now paying the price.

"Our fertile soil and irrigation facility make sugarcane cultivation possible, so we thought of giving it a try last year," says Prahlad Patil Jagtap, a veteran and a director of now-defunct Shankar Sugar Mill, Bangud, Yavatmal. There was one more strong reason for the farmers to opt for sugarcane crop, instead of cotton.

Vinay Kore, Chairman of Warna Sugar Mill and Maharashtra Transport Minister, decided to run on lease the defunct Jai Kisan Sugar Mill at Bodegaon in Darwha tehsil of Yavatmal district last October. The Warna management promised local farmers that they would buy the entire sugar cane crop, whatever be the costs. Datodi villagers obviously thought they would benefit if the mill revitalised.

But as the international sugar prices collapsed and a bumper crop rolled out in western Maharashtra and Marathwada, the Warna management packed up and left the area, leaving the local farmers to grapple with the shock of huge losses.

The Warna management promised local farmers that they would buy the entire sugar cane crop, whatever be the costs. Datodi villagers obviously thought they would benefit if the mill revitalised.

Ironically, the host management of the mill, chaired by the former minister and senior Congress leader Manikrao Thakre, has no concern for farmers either.

Just factor this: When Datodi farmers were sinking in despair, the entire cabinet, including the chief minister, was in Yavatmal to attend the wedding of Thakre's son. The problem of sugarcane is not as acute here as it is, say, in Marathwada, but it assumes a different dimension in a debt-ridden Vidarbha, farmers note.

"In a region devastated by deepening agrarian crisis, promotion of sugarcane is a prescription for disaster," warns Vijay Jawandhia, a farmers' leader in Wardha.

Why would the farmers not take the extreme step, in such a case, ask farmers of the village. In Yavatmal, about 11000 hectares of land have come under sugarcane. But farmers ask who will purchase the crop next year, when mills are defunct?

Take this: As many as 13 of the 16 sugar cooperative mills in Vidarbha are closed  an estimated liability of all the mills put together is to the tune of Rs.1500 crores. What is more, the celebrity politicians of the region own all the sugar mills.

Only one is operational in its full capacity, while two others are operating at 50 per cent capacity. Mismanagement and lack of sugarcane availability in the areas are among the major factors for the closure of sugar mills in entire Vidarbha.

One sugar mill can crush up to four lakh tonnes of sugarcane in a crushing season. Farmers say there was no point in sanctioning so many sugar mills in Vidarbha, when the government knew sugarcane couldn't be cultivated in the region that is almost entirely rain-fed. "It's a massive loot of the public money," they say.

"I can't dare cultivate sugarcane this time around, after this bitter experience," says Vishnu Patil Jagtap, another farmer who has had to burn his crop on five acres of land. "The Bodegaon mill bought only half of my yield," he informs.

Datodi's total loss on account of unpurchased sugarcane is a meagre Rs.15 lakhs, compared to the phenomenal losses borne by the Marathwada cane farmers. For the entire state, the cane problem is getting worse with farmers burning the crop in the fields. But the fallout of sugarcane crisis in Vidarbha could be manifold.

"A small trigger is enough to knock the fragile village economy in the region," warns Jawandhia. "Indebted farmers will have no option but to die."