The savannah ecosystems and agro pastoral grasslands present the last vestiges of survival for the Great Indian Bustard, the Lesser Florican and the Bengal Florican - the three bustard varieties found in India and part of the six sub-species of highly endangered bustards on earth. Given that there are no more than 150 Great Indian Bustards in India today, their survival was perhaps never more threatened than now. Even a human activity as benign as agriculture poses a significant threat to the survival of the bird.

The Great Indian Bustard (GIB) is a particularly endangered species, because of the fragility of its home in the dry arid grasslands or savannah ecosystem. High speed winds or heat and humidity, endemic in these regions, can set these grasslands afire. Therefore, the conservation of the habitat of the Bustard needs immediate attention and action.

In India, there are six states with about five leking sites - sites where the Bustards indulge in sexually oriented socialising - where the GIB survives. In Maharashtra there is only one bird, portending the death knell of the species in that state. Conservationist Ramki Sreenivasan of Conservation India has conducted extensive ground surveys, and lists no more than 5 sites in all of India where they survive in meagre numbers

Rajasthan's Desert National Park, where the landscape stretches across the border to Pakistan with its million-dollar bustard hunting industry and an established clientele comprised of foreign tourists, harbours the maximum number of about 80-100 birds. Gujarat's Kutch area harbours another 20-25 birds. Andhra Pradesh and Karnataka have contiguous leking sites - with a maximum of 20 birds "at optimistic estimates" according to Sreenivasan. Maharashtra has only one bustard. Madhya Pradesh has a maximum of 8-9 birds. These numbers from Sreenivasan draw a very depressing picture about the sustainability of such meagre populations.

Translocating the birds is also extremely challenging because of its vulnerability. Resident between the latitudes of 8 and 27 degrees North, that is roughly between Kanyakumari to northern Rajasthan in India, the GIB breeds only in the monsoon months and makes arid grassland or savannah ecosystems its home, significantly because its food chain is found in these regions. "The Great Indian Bustard is an omnivorous opportunist but in general its diet changes with the seasonal abundance of commonly available food items, showing a strong dependence on animal food when breeding, and part-substituting plant material in the colder, drier parts of the year," say Rahmani and Manakadan in their book Threatened Birds of India (1987).

As summer temperatures rise in the tropical Deccan Plateau, the reptiles come out of hibernation or ground nesting burrows. The Bustard now gets used to eating reptiles, scorpions, lizards, insects, earthworms caterpillars, centipedes, spiders and worms, birds' eggs etc. Again, as monsoons converge over dry arid grassland ecosystems, transforming them into pastoral lands, the sustainability of the species improves as monsoon crops like lentils nurture their reproduction and sustainability. In the winter months as animal abundance wanes, their diet comprises largely of invertebrates; among the types listed in the literature are grasshoppers, which they supplement with grain and cultivated cereals.

Despite such adaptability, however, its numbers are utterly unsustainable, a key factor being habitat loss. It is very easy to destroy the grassland ecosystem on account of the invisibility of the traditional concept of a fragile ecosystem. Grasslands can easily be misconstrued as fallow land, encouraging industrial growth as happened in Chitradurga district's Chalkere grasslands (as in this case) where grasslands have been identified for, among other things, a rocket launch site, a defence R & D lab, a solar energy project, and an amusement park. Without state protection the orphaned bustards resident in such geographies become refugees in their own homes.

Also, as mentioned earlier, grasslands are vulnerable to fires in the dry summer months. Then again, agriculture uses tractors that compact the earth . nesting sites for both the GIB and its prey base. Pesticides . needless to reiterate . threaten the very existence of this largely flightless bird and its food chain / prey base.

Says anthropologist Dr. Ashish Kothari, "Grasslands are amongst the most threatened ecosystem types in India, partly because of the forest-bias. Why do we have only a Forest Department, why not a Grassland department, or a wetland department, or a marine conservation Department? It is worse for those kinds of grasslands which look barren for half or more of the year but spring to life in the rainy season." Sreenivasan concurs, and rues that "... the traditional concept of conservation is forest centric and tends to neglect biodiversity in other ecosystems." 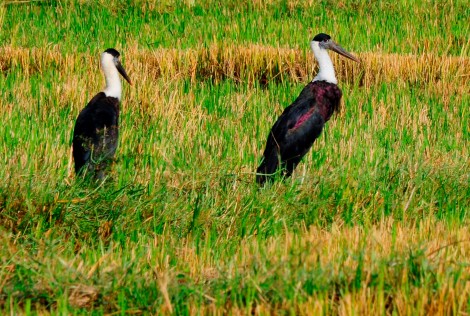 Kothari adds that grasslands have their own composition and diversity of fauna (and flora) which forests cannot replace and when these lands are planted over with trees, as has often been done by the forest department, that diversity is lost."

The Planning Commission stresses "an urgent need for a National Grazing Policy to ensure the sustainable use of grasslands and biodiversity conservation and for implementation of the various recommendations of the National Grazing Policy and Research and Development." The Commission's Task Force Report on Grasslands recommends necessary modification in the new Environmental Impact Assessment (EIA) guidelines by including ecologically fragile and environmentally sensitive areas where prior EIAs will have to be made mandatory.

"Also, the presence of representatives from identified institutions and experts should be made mandatory during public hearing whenever an EIA is done in the grassland and desert ecosystems so as to review the identified impacts, prediction and mitigation," says the report.

However, protecting grasslands is especially challenging because fencing prevents socialisation of endemic fauna. This leads to genetic isolation and weakening of the gene pool. Fencing can also cause rusting . detrimental to the physical safety of fauna. Planting trees, or the afforestation approach of the forest department, is also detrimental to savannah ecosystems. "Plantations affect the visibility of predators like jackals and desert wolves for the birds in grasslands, where they thrive" says ornithologist Dr. Harish Bhat.

The GIB is a victim of conservation neglect and lack of political will. The fact that arid dry grassland ecosystems lack a forest canopy or mega-fauna of the mammalian varieties disqualifies these from concrete, focussed attempts at conservation. The forest department is attuned to "protecting landscapes with canopy" and seems clueless about how to protect grasslands. There is thus a dire need for policy support . to protect grasslands and other habitat for the endangered bustards.

It is not just the Bustards that suffer from this lack of attention. Grasslands support a rare faunal diversity that experts believe rival the faunal diversity under any forest canopy. Blackbucks Chinkaras, Nilgai, wolves, cheetahs (now extinct) varieties of deer, jackal, wild boars and pangolins Nilgiri Tahr, Wild Buffalo are the mammals found in Indian Savannas. Some common birds of these habitats apart from the Bustard are the rain quail, Black Francolin, vultures, peacock, Mynas while reptiles like the Monitor Lizard, as well as varieties of snakes including the Cobra, rat snake, Rock Python and vipers can be found in these arid zones.

A study entitled "Bustard Recovery Programme" by Jhala et al. sponsored by the Ministry of Environment and Forests recommends a centrally planned conservation program similar to Projects Tiger and Elephant, given the migratory nature of these birds (Rahmani 2006).

The study also points out that "Floricans are distributed over mixed ownership lands under private, community and government sectors, which have conflicting interests. For example, the Forest Department intends to conserve natural habitats but the Revenue Department intends to maximize taxes from agricultural expansion. Under this arrangement, coordination between stakeholders for the cause of conservation becomes difficult. Ambiguous land tenure system (unclear land rights, responsibilities and related issues) aggravates this problem (Rahmani 2006). Massive encroachment of revenue pasture lands has been reported from breeding areas in Kutch, but due to the lack of interdepartmental coordination and delay in legal action, these lands have not been reclaimed."

Renowned yesteryear hunter-turned-conservationist Kenneth Anderson had documented the hunting down of a man-eating tiger in what was then a thick wet evergreen rainforest, southwest of Bhadravathi in the south-eastern part of Shimoga district in Karnataka. The degeneracy of forests since then has been responsible for species extinction to a significant extent. Now, it appears that we are about to lose the sentinel species of even degenerate forests . the Great Indian Bustard.