The discrimination 'curriculum' in M.P.'s schools

Schools are meant for making better citizens out of our children but in the Dewas district of Madhya Pradesh, they are forging and reinforcing caste-bondages instead. Inclusive education seems a far cry in the villages of Dewas, reports Shuriah Niazi.
12 December 2007 -

Government schools are meant the 'site of inclusive education', a place where children from all communities, caste, religion, sex can come together for learning and evolving as citizens. Due to their low costs, government schools, are catering to a larger section of society and children, especially in the rural and marginalised areas. However, in Madhya Pradesh, schools are also not able to cut loose from the caste-based discrimination that is already deep-rooted in society.

Situated approximately 10 kms away from Harda block headquarters in Harda district M.P., is Relwa village. It is habited by SCs, OBCs and the general community. Like many other Hindi belt villages, caste based discrimination against Dalits is quite overt here. There are different taps, wells and hamlets for Dalit and non Dalit community. Even the government primary school of this village is not spared from the instances of caste based discrimination. 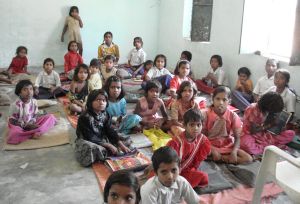 There are three teachers in the Government Primary School in Relwa; one each from SC, ST and OBC. Dheeraj, a 9-year-old boy, studying in class III in this school is already able to talk about the persistent discrimination in his school. He says that his teacher Kuwar Prasad from an OBC community not only calls Dalit students by their caste name but also makes sure that he never asks Dalit students to fetch water for him. Once he had asked a child from his own community to fetch water for him but that child went to play and asked Dheeraj instead to get water. "When the teacher saw me bringing water for him, he called me by my caste name and said that I don't want to spoil my religion by drinking water from a low caste person and threw away the glass of water out of window," says Dheeraj.

A similar picture is presented during the mid day meal where Dalit children are not only made to sit separately from other caste students but are facing more discrimination. Tarun, a 11-year-old studying in class V in this school explains the humiliation. He says, "We are made to sit separately during the mid day meal because master sahab (Kuwar Prasad) says that other caste children will not eat with us. Also, we have our different utensils in school. Every child is supposed to carry his/her thali (plate) and we are not supposed to mix our thalis with other children in school".

Every child carrying his/her plate and not letting it mix with other children's plates. This is a more subtle form of discrimination, because the plates could easily be kept in school, since that is where the meals are cooked and served.

There's more. Tarun says that the lady serving food, Sevanti Bai, belongs to an OBC community and she never touches our plate while serving Dalit kids. "Also we are served first in our school and therefore, she never gives us more than 2 chapatis while she gives unlimited chapati and meal to children from other communities as they are served later. She scolds us when we ask more chapatis but she happily gives more food to other children." Tarun recognised the injustice. "If rules have to have any meaning and relevance, they should be same for everyone," he says.

The mid-day meals are quite popular among the children. But due to the bias against them, Dalit children are not able to get their rightful share in meals.

•  Discrimination in U.P. schools
•  Polishing away their futures

Other villages of Dewas district are not very different. A class three student at the Government Girls School is, Bisakhedi, vividily depicts the agony of students belonging to the Dalit community. According to Shivkanya, girls living in the locality from the upper caste are given sufficient number of 'rotis' (Indian breads) to eat, but Dalit children get only one roti. She says, "Girls of upper caste locality don't have their meals with us. They sit away from us. They maintain a distance from us while eating.

At the Boys Primary School in Bisakhedi, Sachin, Ankit and Mahesh, say that they get beaten up by children of Thakurpura if they happen to pass by their houses. In the school, the teachers also ignore us, they say.

Bisakhedi comes under the scheduled caste dominated Sonkachha development block of Dewas district. The number of upper castes outnumber this village having a population of about five thousand. There are few dalits in the village. The village has separate primary schools for boys and girls. The mid-day meal for both the schools is cooked at the same place and distributed from there. Dalit children say they are discriminated in food and education. The state legislator for Sonkacha, Sajjan Singh Verma, merely says he will look into the matter.

Meera Bai, an elderly woman belonging to this community, is a member of the guardian teacher association, of which Shyam Singh is the president. Meera says that not just the children but the Dalit adults also face discrimination. She narrates an incident from the Republic Day celebrations of 2006, when food was prepared in the school for the children. "Being a member of guardian teacher association, I went to see arrangements and found the number of cooks was not sufficient. I therefore started preparing 'puris'. Shyam Singh, objected at this and said I shouldn't be allowed to cook. I was told to leave the room. Since then I haven't visited the school," she says. 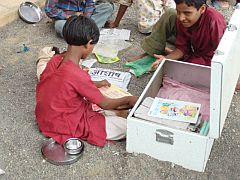 School children along with their utensils at a Dewas school. Pic: Shuriah Niazi.

The situation then escalated to the point that mid-day meals were not served in school for 15 days. Meera Bai's story is supported by Kamla, who lives in a Dalit basti (locality). She says that the discrimination here is not only in schools, but the Dalits are also not allowed to enter the temples. However this story is not limited to Bisakhedi village alone. The situation is more or less the same in dozens of other villages of Dewas district like Chaubara, Dheera, Enabad, Dudhlai, Bairakhedi, Patadia Taj, Khajuria Kanka, Devgarh, Bhoransa and Amlataj. The Dalit children of these villages are humiliated day after day.

In Dewas district, discrimination clearly begins from school. Children learn discrimination here. Speaking on condition of anonymity, a OBC school teacher based in Dudhlai, says that they teachers try to ensure that children sit, play and study together. "But we are helpless before those children who choose to maintain a distance and do not mix up with Dalit kids due to some prejudice. They do not change despite a lot persuasion."

"We reproached the children who discriminate in this way. But we have our own compulsions. Weve to live in the village, we cant oppose too much," says the teacher.

However the mid-day meal is quite popular among the children. One reason behind going to school for these children is the meal. But due to the bias against them, these children are not able to get their rightful share in meals.

Sundar Singh of Ambedkar Vichar Manchi, who works in fifty villages of Harda block is of the view that discrimination exists mostly in rural area schools. "If we do something than people from lower caste residing in those villages face the consequences," he added. Singh says they may face social boycott or may be transferred from the area under pressure from people from the upper castes.

This is the grim picture of humiliation faced by Dalit children in Madhya Pradesh. Their only fault is that they are born in a Dalit family and thus are made to bear the brunt in their everyday lives. Dalit children have accepted this discrimination as their fate and have perhaps started believing that it is only the other caste children who can serve and eat full mid-day meals, fetch water for teachers and visit the kitchen.

Schools are meant for making better citizens out of our children but in the Dewas district of Madhya Pradesh, they are ending up forging and reinforcing caste-bondages instead. The big question in Dewas is this: What are we promoting through our schools, inclusive education or 'sites of discrimination'?

Shuriah Niazi is a Bhopal-based freelance journalist. This article is part of a series on education sponsored by Aide-et-Action India, a not-for-profit organisation dedicated to making education the lever for development.