History, as remembered by the people

Formal urban planning and official heritage narratives have not so far turned their attention to cultural legacies of cities. Citizens groups are often ahead of public officials in exploring this, and their success could point the way forward, writes Annabel Lopez.

As a former capital of many important kingdoms and sub-continental empires, Delhi is a city of outstanding historical significance. The sites that mark important dates and periods of its past are scattered around the city and its hinterland, and widely visited and studied. The architectural breadth of monuments at these sites, and the town planning concepts evident in places around them, have also received a lot of attention. But there is another, less known, side.

Diverse historical, cultural, and environmental exigencies, over hundreds of years, have given the city a unique syncretism of cultures. As each dynasty and ruling establishment gained a foothold in the city, a cultural synthesis was born and grew increasingly sophisticated over time. The historic precincts are sites of this rich intangible cultural heritage legacy -- a unique form of Sufism, the Urdu language, visual arts, crafts, and performing art traditions like qawwalis, etc. The sustained interaction produced a syncretism of cultures never seen before in any other part of the world, and this trend has continued even after independence with communities from various parts of India claiming distinct parts of the city.

Few people, however, are aware of this. The city's tangible heritage has received a fair share of attention, with 1718 legally protected monuments, but the intangible heritage is hardly even acknowledged, and the image of Delhi as a Ganga-Jamini tehzeeb or a confluence of cultures is slowly getting lost. In a rapidly globalizing world, such change in the cultural fabric is inevitable, perhaps. But as some initiatives are demonstrating, it is possible to preserve it much better.

Local narratives in a global city

A number of heritage initiatives by private organisations and citizens have come up in recent years, alongside efforts by governments. While the latter have tended to focus on physical spaces, architecture and narratives of dynasties and rulers, the people's initiatives have focused more on cultural aspects. As a result, there is increased awareness of both the tangible and intangible heritage of Delhi among its residents. Guided heritage tours have come up in several neighbourhoods, where experts and eminent professionals share their knowledge of the remnants of the historic cities, urban villages, architecture, the natural world, food, and more.

The most effective outreach is to the young citizens of Delhi, through various awareness campaigns in schools across the city. Painting, poster-making, photography, short film making, and essay writing competitions are held for the school children regularly. An almost immediate effect is seen, as these awareness campaigns have resulted in innovative initiatives by schools and school children themselves, creating a constituency of people who are aware of their cultural heritage. Clean-up drives at monument sites, 'adopt a monument' schemes, documentaries of oral histories have all mushroomed.

For urban planners as well as heritage professionals, this is a new opportunity. Like elsewhere in India, in Delhi too the planning bodies of the government have limited themselves to 'land use' thinking. And official history has often been a rote chronology of rulers and their exploits, both good and bad. The informality of Indian life, and the myriad cultural manifestations of the past in many historic cities have not led to a distinct Indian approach to the history of our famous cities, nor to an inclusive socio-cultural planning and imagination of the present and the future. Could the rising tide of local narratives and private initiatives change that?

In 2017 Shapno Ekhon, a creative group focused on theatre and heritage conservation in the Chittaranjan Park neighbourhood established an oral history initiative to spread active consciousness about the area's heritage amongst children and adolescents. "It was born out of our growing and evolving engagement with the people, places, and ecology of C R Park," says Shahana Chakravarty, who is a project manager with the group. "We realized that this area, a post-partition resettlement colony, was full of stories trying to find a voice."

The endeavor was quite unique; children recorded oral history in conversations with older residents, many of whom were the original settlers in their neighbourhood, having migrated from East Pakistan after Partition. They are custodians of a unique culture, specific to this group, borne of its unique experience and history.

Tangible attributes of this legacy -- photographs, maps, objects, documents, utensils, clothes, etc which complemented the narratives recorded as part of this oral history initiative were curated into a one-day neighborhood museum. The interactive museum, targeting the community of CR Park so that they could see the significance in a 'slice of their history', was complemented with performances, celebrating the heritage of the neighborhood. This is a community of people owning and writing their history and sharing their past and creating knowledge for generations to cherish, inherit and ponder over.

Monthly, extremely engaging addas are accompanied by an exhibition of archival photographs or pop-up neighborhood museums. These story recording sessions have been unique in their special way. The adda on the 'Food of CR Park' for example was a discussion taking the residents down memory lane, to the emergence of the food shops in the market and then circling back to the present where home chefs are initiating new ways of making Bengali food popular. Home catering and pop-up restaurants specializing in Bengali food are some of the spin-offs from this initiative.

Such initiatives and their cascading activities help reinforce the uniquely rich cultural heritage of this ethnic group. A proposed new permanent neighborhood museum, when it comes up, will be a critical record of community memory. The community also has vibrant and very unique public spaces. Nowhere else in Delhi will you find youth playing carom, every evening, or a group of women gathering in designated space to sing. The market has a platform in the middle of it, where theatre shows are sometimes organized or the same space on other occasions is used for community protests, activism, or a discussion on politics.

Documentation at this level of detail, that records people's memories, community traditions, articles of everyday use, and associations with the urbanscape is not only a record of a specific ethnic community but also provides a platform for contemporary reflection and contemplation on the limits of acceptable change. The documentation process has provided the community with the platform on which to have meaningful discussions and make choices and informed decisions. 'What is of significance and must be retained at all costs?', 'What change is inevitable and can be accommodated?' -- such questions now have a place to be asked, and answered together.

Already there is interest in replicating this effort in other parts of the city. Such hopes will receive a collective fillip if planning authorities too take note. The next step for Neighbourhood Diaries is to ensure the incorporation of local narratives and preferences into a Local Area Plan. And for planners, this is bound to throw up questions - can cultural mapping of our cities provide the tools for inclusive planning and form the starting point for the preparation of more inclusive local plans and town planning schemes?

Other groups in the neighbourhood may have answers for the way forward. Also within Chittaranjan Park is a volunteer group of architects, city planners, urban designers, and transport planners who have formed a Green Community Initiative. They draw the attention of elected representatives and local officials to concerns raised by residents in public, participatory dialogues. Typically these are civic issues pertaining to safety, mobility, and the environment, but heritage narratives and conservation efforts too could easily become part of such local agendas.

The current draft of Delhi's Master Plan, 2041 acknowledges that the metropolis has areas with unique cultural identities, and recognizes the need for identifying Cultural Hubs and Cultural Zones - an aspect not recognized in the earlier Master Plans. However, no mechanisms are in place to either map or retain the uniqueness of these cultural zones, nor for the implementation of heritage-aware Local Area Plans. In neighbhourhoods like Chittaranjan Park, residents are already leading the way, signaling their interest in this. In time, they hope, their leaders and local auhorities will follow.

Annabel Lopez is a conservation architect based in Delhi. 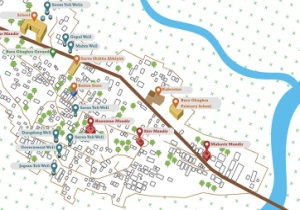