Whats in a Name, Part II

Varupi Jain concludes a two part series on the country's messy Geographical Indications regulatory system through the eyes of MP's Chanderi fabric, one of first serious applicants for a GI.
01 June 2004 -

A geographical indication (GI) is a sign used on goods that have a specific geographical origin and possess qualities or a reputation due to the particular place of origin. Most commonly, a GI comprises the name of the place of origin itself. India passed the Geographical Indications of Goods (Registration and protection) Act 1999 with a view to provide for the registration and better protection of GIs relating to goods. As an economic benefit, GIs act as an authenticity/quality mark. This is a factor in enhancing export markets and revenues.

Part I of this two-article series considered the prospects of what could go down in history as Indias first registered Geographical Indication (GI)  Chanderi fabric. Vinay Jain, Consultant Lawyer for United Nations Industrial Development Organisations (UNIDO) Cluster Development Project at Chanderi has been instrumental in initiating the process of securing GI status for Chanderi fabric. However, from his experience in leading the registration process for Chanderi, Jain points out several grey areas in the law enacted by the Parliament of India.

Second, the Act is silent on the issue of migration. What if a skilled worker, also an authorised user, leaves Chanderi for a distant town? Does he still hold the right to produce Chanderi products? Also, if a person migrates to Chanderi and after a few months learns the skill  can he register himself as an authorised user?

Third, the Act does not make provision for inheriting the status of authorised user of the GI. This is anomalous mainly because the production of most GI products often runs in the family and is learnt, inherited and carried forward by subsequent generations. Strange, that while the family remains most crucial in passing on the very skill in question, the Act does not allow GI users to pass down the legal status to practice the skill within the family. 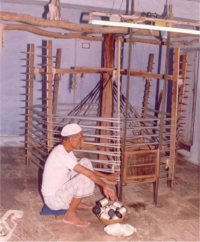 An uncertain stare: Is the GI all gain and no pain?

Four, the status of GI is valid only for a period of ten years. This is hilarious at best and illogical at worst. The application procedure for the GI involves an examination of the geographical regions cultural and historical past, taking into consideration the various factors, which might have contributed to the uniqueness of the product. Much of this will not have gone any considerable change after ten years. And if this period is set in order to evaluate the existence and vigour in the supply of the product after a period of time, mandating re-application for GI is unnecessary. If the production of the famous footwear in the town of Kolhapur gradually fades away, then simply, the GI gradually fades away. According to Vinay Jain, this 10-year clause has been blindly copied from other Acts like the Trademark and Copyright Acts without considering its (lack of) application for the GI Act.

Forget for a moment the commercial, social and regional implications of the GI status. GI protections are broadly comparable to the World Heritage status granted by UNESCO to monuments/natural sites fulfilling certain benchmarks of age, significance and historicity. It would indeed be unacceptable if the Taj Mahal were to stop being heritage after ten years and be asked to send in an application form to renew the stamp of its historical significance.

Five, Jain points out a legal lacuna. Subsequent addition of authorised users can take place only with a No Objection Certificate (NOC) of the proprietor of the GI, which has strong monopolistic implications.

Six, the GI Act seems to limit the spread of the manufacturing technique of the product. If, for instance, someone in Maharashtra is able to produce fabric with exactly the same characteristics as that of the one produced in Chanderi and the former craftsperson even refrains from selling her product as Chanderi, the Maharashtrians production is nevertheless illegal. This is primarily because, GI, while protecting the skill, links it  and sadly confines it  irrevocably to the region where it evolved.

Protection should not come at the cost of economic, administrative and legal disadvantage and inconvenience of the very people possessing the skill.

Nine, specific provision for universal recognition of GI products would make the Indian Act more well-rounded. India cannot expect the USA not to register Basmati rice unless the Indian law ensures that no GI registered in any other WTO member country will be registered as such in India. GI registration needs to be honoured on a reciprocal basis among member countries.

Last, until now, in a country boasting of over 2000 potential candidates for GIs, there is only a single office for the registration of GIs (in Chennai). While the Act has been in force since 1999, there is not even a single registered GI in India. Also, from the date of filing the application for the GI, it may take as many as 2  3 years before the GI status is granted. All this amounts to considerable operational inconvenience.

All of this apart, a few fundamental issues warrant attention. First, there is an obvious flip side to the protection offered by India's GI Act. The very geography which is the distinguishing feature of the protection can easily become a limitation in terms of demand and supply. An expected outcome of the protection offered by GI is greater recognition of the product and enhanced assurance of authenticity leading to greater demand. This in many cases (like the case of Chanderi fabric) also means targeting the export market. However, as Part I of this article points out, there are only 3600 adequately skilled weavers working in Chanderi.

Producing at the rate of 2 m of fabric per day, they can produce only about 7200 m of fabric a day, which points to the fact that a majority of fabric being sold in the name of Chanderi across the nation is spurious because given the limited physical capacity of the authentic weavers, it is impossible for them to produce as much fabric as is in circulation at any given time. If original Chanderi would have to struggle hard to meet even the domestic demand, focusing on the export market sounds unrealistic.

Even a potential solution to this may result in another catch in the concept of GI. Only inhabitants of the geographical entity to which the GI pertains can be authorised users of the GI. If however, there were a mechanism to train more weavers at the original place (in this case Chanderi) and then channelise production to other nearby locations, perhaps the demand could be met. But then again, such an eventuality, though commercially more viable, would challenge the concept of GI as outlined in the GI Act, and throw up questions about the role of geography (climate, soil, flora and fauna in the case of food and plant products) and the contribution of the original inhabitants of the region in the evolution and identity of the product.

Second, increased protection, particularly applied internationally, may adversely affect local enterprises which currently exploit local benefits or processes that may be outlawed by another party's acquisition of a GI. Thus, there are the risks of losses to countries and regions producing substitutes for goods that become protected by GIs since a proliferation of GIs would tend to reduce their individual value.

Despite this, by illegalizing spurious use of the GI name by traders/producers not registered as authorised users, India's first GI Act has taken the first steps forward. The tacit socio-economic spirit of the Act is certainly to enhance the credibility and therefore the market of GI products by differentiating GI products from their counterparts inferior in terms of quality, reputation and characteristics.

In sum, the GI Act could be enormously beneficial for a country as rich a source of potential GIs as India. However, several problems exist in the framing of the law, rules and administration. For real benefits to accrue, these must be resolved. The Act needs to be more user-friendly and ensure easy operation and administration. Protection should not come at the cost of economic, administrative and legal disadvantage and inconvenience of the very people possessing the skill. More significantly, buyers and producers in the shrinking marketplace of our globalising world will need to determine if geography is an asset or a limitation.

Varupi Jain works with German Technical Cooperation, and is a freelance journalist. Vinay Jain is a practising lawyer in Delhi and consults on GI laws in India. He may be reached at jainlawyer@hotmail.com.