From home and hearth, to employment, to disasters, women are bearing the brunt of the climate catastrophe, but are excluded from participating meaningfully in decisions that are impacting their lives more and more. Ambika Vishwanath speaks with Omair Ahmad.

There are few people as quotable as the dead German philosopher Friedrich Nietzsche. He excelled at writing things that were both offensive and thought-provoking at the same time. In the introduction to his book, Beyond Good and Evil, he wrote, "What if wisdom is a woman, and thus all the strivings of philosophers have been in vain, because which man has ever understood a woman?"

Beyond the schoolboy misogyny of the statement lurks a difficult question, and one that is possibly best illustrated by the climate crisis in India. If we rephrase it ever so slightly, it forces us to look at the problem in a whole new way. "What if the climate crisis in India is disproportionately a crisis faced by women, and thus much of the strivings of our policymakers - overwhelmingly male - have been in vain, because they do not relate to the experience of women?"

The climate crisis is a water crisis, and water - in India - is very much women's business, but it is business over which they have very limited say. In 2009, a paper titled Situational Analysis of Women Water Professionals in South Asia, looking at women professionals in water bureaucracies in South Asia, found that they were only 2-5 per cent of the staff. None were in senior positions. The situation may have improved since then, but there is little research being done in this area.

Climate change is manifested most clearly through the disruption of weather patterns, i.e. longer periods of less rainfall, and shorter periods of intense rainfall. For women in India, many of whom do not have access to clean drinking water in their houses, longer dry periods mean far more time getting (less) water for the household, which is a socially determined responsibility for them.

Women wash clothes and dishes next to
a well in a village in the Bundelkhand region.
Photo Credit: Balazs Gardi.

Secondly, there is the impact on agriculture. About half, or more, of India's farmers do not have irrigated land. They are dependent on rain-fed agriculture. As the rains are disrupted, it is this large section of the population that is made most vulnerable. And labour on Indian farms is overwhelmingly that of women. Unsurprisingly, they often do not own that land. The statistics are harsh, 73.2 per cent of rural women workers are farmers, but they own only 12.8 per cent of the land.

Third, is the challenge of dealing with floods. Although information has become more and more accessible by mobile phones, it is striking that Indian men are 33 per cent more likely to own a mobile phone than women. This means that women are far less likely to get information on their own, even if the state provides it in a timely fashion. It also means that they are effectively excluded from decision making since they are excluded from the information needed to make those decisions.

Lastly, our disaster response teams - quite often dominated by security forces, whether police, paramilitary, or the Army - are almost completely dominated by men. Given that in rural areas where social constraints are higher, women are discouraged from interacting with "strange men", it leaves women further alienated from even being rescued.

From home and hearth, to employment, to disasters, women in India are bearing the brunt of the climate catastrophe, and - at the same time - are effectively excluded from being able to participate meaningfully in the decisions that are impacting their lives more and more. As geopolitical analyst and water security specialist Ambika Vishwanath (pictured) of the Kubernein Initiative explains, these are issues that are specific to our socio-political reality. A feminism fit for purpose in the climate crisis has to be a feminism that is also shaped by poor countries, and it is where India needs to play a leading role. 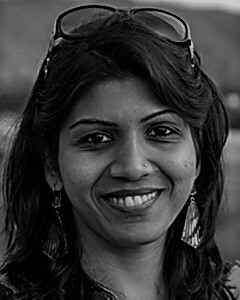 Q. How did Kubernein come about?

In 2018, Priyanka Bhide and I were wondering what to do next. No place fit all the things we were interested in (urban water management, gender, climate, India connected to the world), or if they did, they did not have the flexibility or the work-life balance we thought was necessary, so Kubernein was created as the place we could not find to work at, in a way. Its name derives from the Greek word for governance, or steering, and that is what we wanted to give input on. So it is a small for-profit consulting firm working with other organisations with similar interests.

We are a small team with a specific interest in urban water risk as well as gender and foreign policy. That is not the sum of our interests, just an important part of our work. People have suggested getting involved on artificial intelligence or India-Pakistan, and although these issues are important, there are already plenty of people working on them. We would rather be a partner with organisations that would allow us to focus on things we specialise on, to help make their work more holistic, solve the smaller pieces of the big puzzle.

Q. Is water part of that?

Definitely, and something I have come to after my work in the Middle East and Europe. The issue of inter-connectivity that we emphasize takes on special meaning here in India. So, for example, we tend to focus on the availability of water - a tap in each house, as the current government has promised. This may guarantee access (and for communities that have been deprived, that is a big thing), but it may not lead to sustainability. This means that women who have had to trek for an hour and a half every day to get water, get water at home, but then it stops coming at some point in the future, so they are back where they were.

In politics the salience of access and availability in a country with limited infrastructure like India has great meaning, but unless these interventions are better thought out - to ensure rational use, waste processing, circularity - they are sub-optimal solutions. This is hard for governments to do, and things like rational use, and limiting over-exploitation, must have community buy-in to work well. This is the type of input we are trying to provide when we advise policymakers or work with think tanks like the Centre for Policy Research and others. In the end it is up to the policymakers to make the decisions, and some of it will be inevitably lost in the politics.

We try not to push regulation, because there is already so much there, and that does not really help. You can't tell citizens who have long been deprived of water to use less of it when they get access. Nor is the issue of urban industry wasting water (80 per cent of urban water goes to industrial units) a matter of regulation, but of actual implementation. You have to convince people. Like the vans that go about in small towns with the Swachch Bharat tune, you drill the idea into people's minds over the long-term and it leads to behavioural change. That is better than a law you cannot enforce.

Of course, if you need to end littering or waste, slogans and songs can only do so much, you must also provide dust bins and waste management budgets, so it needs deep consultation and involvement of multiple stakeholders to make even one successful intervention take hold deeply.

Q. How does a feminist foreign policy fit into all of this? What is it?

This was an idea first articulated by the Swedish foreign minister Margot Wallström in 2014. She saw this as a way of bringing in genuinely alternative perspectives (she found it contentious that Sweden was backing peace proposals while, at the same time, being one of the largest arms exporters in the past). Other countries have followed this lead, and it is starting to become something of a global norm. But it risks being a norm articulated by European and North American countries that is rooted in their socio-economic conditions.

Last year Libya announced that it too would follow a feminist foreign policy, but we still don't know what that means, and Libya cannot simply follow European ways of doing things. Its conditions are too different. There is also the danger of having women in the room, but no power in the room. For example, early after independence the women in the Indian Foreign Service were traditionally given the 'softer' portfolios like culture, instead of security. That has changed over time, and we should understand what India's experience has been, what needs to be done, and whether it is a more relevant example than, say, Sweden, for some developing countries.

Q. How did you get involved in this?

Honestly, I have no idea, it wasn't planned. After I finished my 12th grade in India, I gave a number of competitive exams and found the SATs for the US very easy. I had initially thought to do journalism, but ended up doing a wider liberal arts programme that allowed me to focus on political science and international relations. I then studied and worked in Turkey and Egypt on conflict resolution and conflict management – courses that were not really being taught in India at that time - and I received some great advice from my professors.

In India I worked with the Hunger Project with the Panchayati Raj ministry on training women elected to reserved seats and it was a fascinating experience, and I had the most amazing woman as a boss. I think that served to convince me that it was these complex, interconnected issues that I wanted to work on.

Q. Is there something that you think we do not pay enough attention to?

I think in India we are too used to seeing water only through the issue of water security (getting access to it) or as a trans-boundary issue. We do not understand the fullness of what water means. It is not just about using it, but how it is central to issues of food, health, dignity, and economic risk. For example, when Chennai went through acute water shortage a couple of years ago, its automobile industry had to be shut down for a while. Tamil Nadu accounts for 40 per cent of India's automobile industry, so this was a really big thing, but we don't seem to understand it as a multi-faceted issue.

Biodiversity, the environment, the beauty industry, disaster management... so many things are inter-connected with water management, and we need to think of it in that way to deal with our challenges.

Omair Ahmad edits the Environment of India newsletter, where this interview was first published. Ambika Vishwanath is Founder Director of the Kubernein Initiative, a geopolitical advisory firm. She was a China-India Visiting Scholar at Ashoka University in 2020-21, and is a Non-Resident Fellow with the Agora Institute, Germany.

TIGER SANCTUARY : Are tigers back at the Buxa reserve?
MORE ARTICLES
on similar topics ...
CLIMATE