What's in that compost you are using: burnt waste?

A citizen’s probe unearths a racket in which toxic burnt waste is sold to farmers in the garb of vermicompost; what’s more, the packaging indicates involvement of a composting firm under the government. Shree D N and Akshatha M report from Bengaluru.

Abitha Shetty (name changed), a resident of Bellandur in south-east Bengaluru found her two children complaining of severe headaches all of a sudden. She had seen garbage being burnt indiscriminately near the school where her children study, in an area known to house several among Bengaluru’s most reputed schools.

Being conscious and aware of the possible ill-effects of air pollution, Abitha decided to check out what was happening. What came out of one concerned citizen’s probe is a huge shocker that has brought some of the biggest names involved in the city’s waste management efforts under a big cloud.

Accompanied by the Deputy Environmental Officer of the Karnataka State Pollution Control Board (KSPCB), Abitha visited the spot (Choodasandra) on Sarjapur Road, where she had seen garbage being burnt regularly. At the time of the visit, 10 or 12 people were working at the site, while more garbage was being burned a few meters away.

“We saw piles of mixed waste that were burning. Then we saw a sieving machine and below it was sieved blackish soil. This was being filled in bags. We also saw a large number of filled bags,” says Abitha.

But then, brace yourself, the labels on these bags filled with the residue of burnt mixed waste claimed it was Vermicompost! Even in Kannada, the bags displayed the text 'Ere Huluvina Appata Savayava Gobbara', which translates into pure organic manure produced by earthworms. 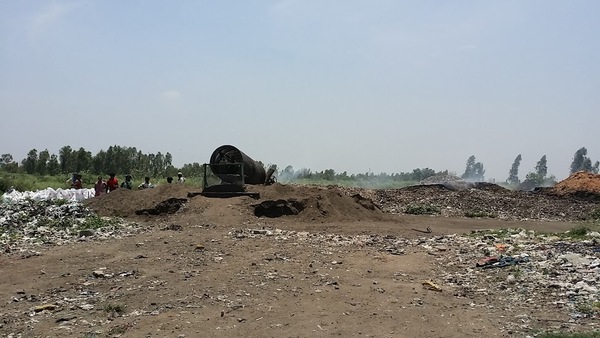 If that is not shocking enough in itself, the label indicates that these bags belong to the Karnataka Composting Development Corporation (KCDC) - a firm that was started by the Government of Karnataka in 1975, with a tri-party agreement between The Agro Industries Corporation, the Karnataka Cooperative Marketing Federation and the Bangalore City Corporation.

KCDC being a government organisation, its compost has always carried a stamp of authenticity and its quality has been rarely questioned by the people. However, this incident has been a jolt and has put a big question mark on the authenticity of the compost sold by KCDC.

Whose compost is it?

The chain of discoveries that have surfaced following Abitha Shetty’s initial enquiries appear to reveal the tip of the iceberg alone, as a much bigger rot lurks underneath.

Questioned by the KSPCB official inspecting the spot along with Abitha, the men working at the site claimed that they were from Terra Firma and the land was privately owned.

Incidentally, Terra Firma, or Terra Firma Biotechnologies Ltd, a  firm engaged in solid waste management, is one of the private players to which KCDC awarded a contract to supply compost.

However, it could not be verified whether the 'Terra Firma' mentioned by the workers on the site and the firm with the KCDC tender are one and the same, or even if the workers did indeed belong to the firm. KSPCB Deputy Environmental Officer H K Lokesh who inspected the site said that there is no proof to conclude that the unit is operated by either Terra Firma or KCDC.

“No board has been displayed at the site naming the unit. When we asked the workers they said they were working for Terra Firma, based on which we assume that it belongs to the same firm. The KSPCB head office has directed the regional office to carry out an inspection and find out who is behind the mess,” he said.

But the KSPCB, too, has failed to establish the organisation or person who runs the garbage composting site.

KCDC on its part has denied any connections with the above unit or knowledge of its illegitimate practices. KCDC Chairman Dr Anand Kumar did, however, clarify to Citizen Matters that the Corporation used to purchase three types of composts, namely, city compost, vermicompost and granulated organic manure (branded as Agrigold) from private firms including Terra Firma.

“Now we have stopped buying compost from private agencies, except for Terra Firma. I was not aware of burnt garbage being labelled as vermicompost in an open ground in Choodasandra,” he said.

Another insider, who did not want to be named said that, according to the agreement between the KCDC and private agencies, KCDC provides bags bearing its name to private agencies whenever there is a bulk demand for compost from buyers. Private firms fill the compost in ready-made bags and transport it directly to the buyers.

In the entire process, there is no quality testing of compost sold by private agencies under the KCDC banner. To a query on whether the Corporation conducts chemical tests for quality assessment of the compost sent to them by private firms, KCDC advisor Venkoji Rao replied in the negative.

“We conduct quality testing of the compost produced in the KCDC unit. As far as the compost sold by private firms in KCDC bags is concerned, no quality testing is done as the bags are directly sold by the private parties to the consumers. We do the testing only if we receive complaints from farmers. So far we have not received any formal complaint,” he said.

Interestingly, shortly after the above incident came to light, Kumar said that due to repeated complaints from customers, primarily farmers, about the poor quality of city compost and vermicompost procured from Terra Firma, KCDC has now decided to cancel the tender agreement with the firm.

If the market value of vermicompost is Rs 3,850 per tonne, KCDC pays Rs 3,600 to private firm, which means the KCDC has a profit margin of Rs 250 per tonne. The inside source also said that the agreement with private parties has made the compost business profitable to the Corporation.

“Compost produced and sold by KCDC alone does not bring us much profit as the cost of manufacturing and expense incurred here is high when compared to that of private firms. Three years ago, before entering into agreements with private parties, our annual turnover used to be around Rs 2 crore. But, over the last three years, our monthly turnover in composting has crossed Rs 2 crore,” he said.

Meanwhile, the company that is at the centre of this controversy, Terra Firma Biotechnologies Ltd, has distanced itself from the issue. Terra Firma is also the firm that has been given a contract by the Bruhat Bengaluru Mahanagara Palike (BBMP), the Bangalore City Municipal Council, for processing and disposing solid waste generated in the city.

Terra Firma Managing Director Dr R Ganesh said that his firm has nothing to do with the unit and he would file a police complaint against the unit owner/whoever it was, for maligning the image of his firm by taking its name.

“Our firm has only two waste processing units—one at Doddaballapur and another one at Bilekahalli on Bannerghatta Road. The company has a contract with BBMP to process the collected waste at authorised processing units. I am not aware of any of our unit functioning on Sarjapur road. It appears like an attempt to malign the image my firm,” he said, while demanding that the concerned officials probe into the matter.

However, while both KCDC and Terra Firma claimed ignorance of the Choodasandra unit and its functioning, a visit by Citizen Matters to KCDC, and the vermicomposting area in particular, revealed that the design of its bags and the text on it are exactly as found at the garbage-burning site, which can be seen in the picture below. 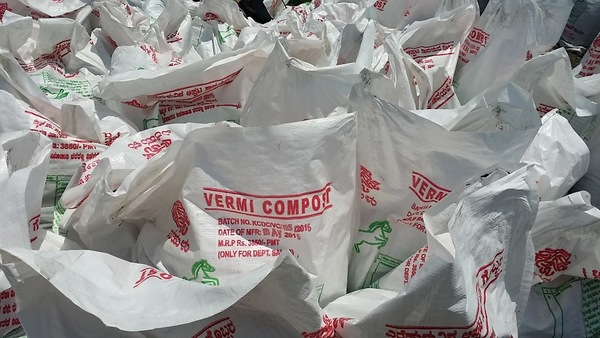 A bag where it clearly mentions 'Vermi Compost' and shows the name of KCDC, with the batch number. Pic: Abitha Shetty/Citizen Matters

Vermicompost is produced by feeding organic material to earthworms, or red wigglers. The  compost thus produced is considered to be the best among all types used by farmers and also costs more than any other.

In Bengaluru, the black ash produced by burning unsegregated mixed city waste which might contain plastic, glass and other materials, is being filled into bags to be sold to unsuspecting farmers and other users. Apart from the monstrosity of the act in itself, this throws up certain larger questions.

What happens to the garbage in our cities? Are they managed scientifically? Even where initiatives commendable in principle are in effect, who monitors the same?

The Municipal Solid Waste (Management & Handling) Rules 2000 require that in all urban local bodies, “biodegradable wastes shall be processed by composting, vermi-composting, anaerobic digestion or any other appropriate biological processing for stabilisation of wastes”.

KCDC is one of only thirteen similar plants in the entire country and India’s first public sector unit to be involved in Municipal Solid Waste management. Its mandate was to turn Bengaluru’s garbage into compost, and eventually sell it to farmers. For years, without any budgetary support, the KCDC managed its activities with revenues from the sale of manure produced through aerobic and vermin-composting.

In the past few years during which Bengaluru’s garbage crisis has infamously peaked, at various hearings, the Karnataka High Court has repeatedly directed that KCDC be given the attention that it requires to revive itself.

The recent scam detailed above casts a shadow over the functioning and management of an institution that is clearly recognised as one of the most crucial ones to combat the waste management problems in a city choking on its own garbage.

This article has been compiled from an exclusive series first published by Citizen Matters, Bengaluru's local interactive newsmagazine, also published by Oorvani Foundation. Shree D N is Associate Editor and Akshatha M is a Staff Journalist at Citizen Matters.