A two-day dialogue on urban rivers held in Pune recently focused on the plight of urban rivers. Shripad Dharmadhikary reports and presents his views.
02 May 2018 -

Human civilisation and its earliest settlements – precursors of cities - have grown around rivers. It is almost by definition, then, that rivers have been a central feature of most cities. Unfortunately, in India, in spite of the important place that rivers have in our cities, urban rivers are in a terrible state. Desiccated, degraded, polluted and encroached, most have been reduced to sewers and garbage dumps. Though there is significant attention on rivers in the country, the specific problems of urban rivers have received little consideration. Therefore, a Dialogue on Urban Rivers, held in Pune recently from April 20 to April 21 , brought much needed focus on the issues of urban rivers, and ways to address them. 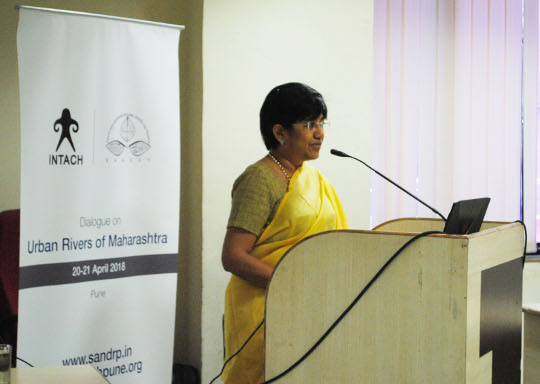 The idea for the Dialogue, organised jointly by the South Asia Network on Dams, Rivers and People (SANDRP) and INTACH, Pune Chapter, emerged from the fact that apart from being plagued with long-standing problems like degradation and pollution, urban rivers in the recent years are seeing a new set of interventions that threaten to alter their basic characteristics, even wipe out their very existence. These interventions include what is being called – quite incorrectly – Riverfront Development (RFD), and Urban waterways.

The Dialogue discussed in detail many of the important problems plaguing urban rivers today. Two interesting presentations highlighted how bioremediation – using biological means like plants and bacteria  to clean polluted water - can present cheap and effective ways of addressing the problem of pollution. Examples of cleaning of lakes in Bengaluru and the Asi river in Varanasi were presented respectively by Vishwanath, an Urban Planner from Bengaluru and Manu Bhatnagar of INTACH, New Delhi. A point highlighted was that conventional sewage treatment plants and processes are designed with the idea that city sewage contains mainly biodegradable material, but are oblivious to the fact that massive quantities of toxins are also contaminating sewage now with the use of many chemicals in homes and establishments.

A number of people presented cases of how rivers and riverbeds are being encroached – by private interests and often even by municipal authorities to build roads, parking places and eateries. Sarang Yadwadkar, a river activist from Pune and one of the organising committee members of the Dialogue, presented a case of how the Pune Municipal Corporation had illegally constructed a road in the river bed, which had to be ultimately demolished after the orders of the National Green Tribunal and the Supreme Court. Several vibrant sessions discussed the fights and struggles by various people in different cities against such encroachment.

My presentation described a more recent set of interventions in Urban rivers – the push to convert them into waterways. This is a part of the larger central government program initiated in 2016 to convert 111 rivers in the country into large, commercial waterways plying big barges and large passenger vessels. This would convert and reduce rivers into mere channels, and with the need of continuous dredging and/or building barrages to maintain water depths, would lead to destruction of river habitats, river ecology and also the livelihoods of local communities. Moreover, contrary to the assumption that such waterways would provide more options for urban passenger transport, thus easing congestion for city residents, many of the urban waterways are being planned to transport industrial goods, and even hazardous commodities.

Himanshu Thakkar, water and river expert, SANDRP, New Delhi emphasised the need to have a comprehensive Urban Water policy to address the unique issues related to urban river and water, a recommendation that was endorsed by the gathering.

Riverfront Development – what vision for our rivers

The Riverfront Development (RFD) scheme was one of the central points of discussion in the Dialogue. Riverfront development, or riverfront beautification, became a talking point in the country with the development of the Sabarmati riverfront in Ahmedabad by the Ahmedabad Municipal Corporation. Stunning pictures of the concrete walkways and parks along the Sabarmati in Ahmedabad have been shared extensively, and Sabarmati has emerged as the “model” of how a river can be “beautified”.

Attracted by this, many cities in the country – including Pune -  have decided to go for riverfront development using this very model, and in fact, are also engaging the very same consultant who designed the Sabarmati project, HCP Design Planning and Management Pvt. Ltd.

Shri Bimal Patel,  who designed the Sabarmati RFD, and who is also a consultant to Pune for its RFD project, participated in the Dialogue to present the Sabarmati project. A representative of the Pune Municipal Corporation presented Pune city’s plans for RFD.

In reality, what the project has done is to convert these 11 kms of the river in the city into a large elongated lake, with a barrage at Vasana holding the water. Sabarmati has little water of its own, and what is standing right now in the “riverfront” is the water from river Narmada, emptied into the Sabarmati from the Narmada main canal at the upstream end. This water is from the Sardar Sarovar dam, whose construction despite displacing lakhs of people and destroying the environment had been justified for the need to take waters to the dry farms of Gujarat.

The banks of the Sabarmati along these 11 kms have been concretised and channelized, and concrete walkways, promenades and some parks created along the sides. In short, “developing” the riverfront has meant converting the river into an artificial, concrete built up space, with stagnant (not flowing) water. In the process, some 10,000 poor families living on the banks of the river had to be evicted to make space for the concrete walkways and facilities. These families were ultimately resettled far away only after a long, hard fought legal battle.

Meanwhile, the project now plans to sell some 15-20% of the space “created” to big corporates and star facilities, to make the project “self-financing”.  Last, but not the least, the Narmada project has warned the Sabarmati RFD that from the next year, it will discontinue giving Narmada waters to the Sabarmati, and the RFD would have to go to what is claimed to be the original plan – fill the Sabarmati (riverfront area) with Ahmedabad’s treated sewage. What this will mean for the “beauty” of the riverfront is to be seen, and may be the sheer economic and political power of Ahmedabad’s elite and those buying valuable commercial land on the riverfront will force the Narmada project to keep pouring Narmada waters into the Sabarmati riverfront.

An important question is how, with all these issues, has the Sabarmati emerged as the model for such RFD. The Dialogue discussed this, and Shri Bimal Patel, in his presentation, gave the very simple explanation that “the project happened because many people – lakhs of people, wanted it to happen”. In other words, the project has mass appeal. This is certainly true, but going deeper into this, the Dialogue brought out two key reasons for this appeal. One, the concrete walkways, with gardens, clean open spaces and a river full of water – even if the water is stagnant, certainly look much better than your typical urban river – mostly dry, dirty, with garbage and sewage in it. But more important is the fact that this seems to be the only picture, the only design of how a river front can be developed, that has been offered to the people. No other options have been presented.

One driver for the Government to push the Sabarmati model as the only option is the large areas of prime real estate which can be “created” and sold. Indeed, even the Pune proposal provides for bringing in the red and blue lines (the levels to which the river floods, and hence areas where construction is not permitted), creating large swaths of prime real estate in the city.

Yet, the Dialogue showed that when other options are offered, people may reject the Sabarmati model. A presentation by Neha Sarwate, a planner from Vadodara, talked about how exactly the same model as the Sabarmati RFD was adopted by the Vadodara Municipal corporation to develop its Vishwamitri river, with Mr Patel as its consultant. Yet, the citizens of Vadodara raised a series of issues and started a campaign proposing alternative ways of developing the river – where the river is preserved as an ecological entity and the links of the common people to the river are strengthened, and this has led to the Municipal Corporation cancelling the current proposal. 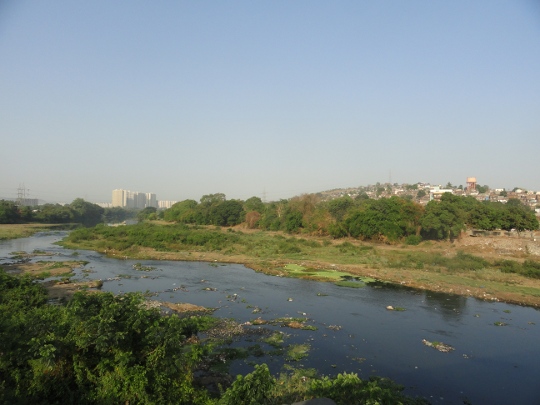 Closer home to the Dialogue, Dr. Swati Gole of the Ecological Society presented a detailed alternative plan to the Pune Municipal Corporation’s proposal of the RFD. Her plan, based on a detailed study of Pune’s rivers, talks about developing the river (front) in a way that maintains and creates habitats, supporting flora and fauna, maintains the biotic and abiotic functions of the river, and helps revive and restore the river as a living and natural entity.

Indeed, the Dialogue showed that the real conflict is between a vision of river development that  talks about converting urban rivers that are already degraded and dry into stagnant pools of concrete channels and completely built up artificial structures with expensive real estate being squeezed out of the river (the Sabarmati model), as against a model that talks about restoration of rivers as living, natural entities, where links of the common people with the river are supported, where rivers are  used by human societies, but also retain ecological integrity (the Pune and Vadodara alternatives).

The success of the Dialogue lies in bringing out these two conflicting visions as fundamental to how we want to develop rivers, particularly urban rivers, and a resolution by many of the participants that they will start a campaign to push for Pune to move away from the Sabarmati model to a more ecological and socially sound model.