What are you waiting for?

The Age of Consent is a clarion call to implausible action. But maybe that's the point - to urge that we ask why the obviously good outcomes seem so unlikely.
01 April 2004 -

When a group organised a program opposite the World Social Forum with the protest that the WSF was "not radical enough" I asked, why aren't you painting the walls of Reliance Industries? Are they radical enough? 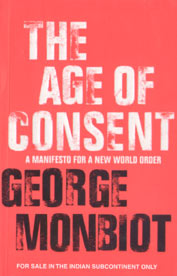 I am as wary of cheap sneers and easy dismissals as I am wary of anything calling itself a "manifesto for a new world order." The fact is, it's not so easy to dismiss the prevailing world order. So, in considering George Monbiot's latest book, we must first grudgingly look beyond the bold capitals on the cover declaring "For Sale in the Indian Subcontinent Only," not unlike so many dams, discontinued contraceptives, unapproved pharmaceuticals & pesticides. In this case the intention is to protect the profits of the publisher in other markets. Overlooking that as well, we can appreciate the effort involved in proposing a constructive program amidst a familiar cacophony of dissent.

He evaluates the existing systems such as the United Nations, which have also been founded with such noble intentions and calls for the UN General Assembly to be democratized, capturing the powers now vested in the Security Council. Along with this he proposes a democratically elected World Parliament, and International Clearing Union for timely debt clearances and a Fair Trade Organisation. Details of these proposals draw from historical experiences and ideas which have been put forward in other times and places, which Monbiot believes deserve a chance to succeed here and now.

To popularise and reach consensus on this program Monbiot proposes to "publish pamphlets and web pages ...in as many languages as we possess." (pg. 89) The trouble is, it's precisely those people who are most oppressed whose languages and communication technologies, knowledge paradigms are not represented in writing or in websites. A system that excluded these people would give disproportionate weight to the already powerful. While he understands that it will require extra efforts "to reach people who are illiterate," (p. 126) is he aware that the illiterate may be trying to reach us? What efforts could we make to be better reached? Sadly, he can't envision a scenario in which all have an equal voice or even an equal opportunity for a voice. Monbiot acknowledges, "We may have to start without some regions of the world." (p. 93)

Missing from this manifesto is an appreciation for those who practice the solutions RIGHT NOW - without any big budgets or World Parliaments.

An immediate benefit of a manifesto that demands, as Monbiots does, to be taken seriously, due to the fine blend of passion and humility with which he argues for it, is that it generates debate, criticism and alternatives. He knows that his proposals will horrify all right thinking people yet he gets past the horror and elaborates them anyway. He is right to do this. Yet I object to the at last factor with which the manifesto is being pushed. At last the anti-globalisation movement will tell us what it is for. This is grossly unjust. Though they may not make the evening news, the rural majority of India as well as the world works every day to keep Monsanto out of their fields, the World Bank out of their pockets, and Uncle Sams war machine out of their faces, so that they may simply live. Their societies, cultures, and economies present a living alternative to globalisation. These are disappearing not to embrace modernity but simply because the spaces where they flourish are being bulldozed into oblivion.

The Age of Consent
A Manifesto for a New World Order
George Monbiot
Harper Collins 2003
Rs. 250

Can we not propose to change the world from the multiple manifestos in myriad languages of these spaces? An inexorable problem with this and numerous other such alternatives dependent on love, human kindness, and the distribution of anti-power is simply the low probability of it happening. But what do we mean by happening? On the global scale, everywhere at once? In the cities and on the information superhighway? Monbiot would perhaps argue that our solution needs to happen there as well in order to threaten those who now make war on the planet.

Is this possible? If enough people are ready to find out, why not? Hoarse from shouting slogans, on the long train and bus journeys home, in the late night chats after all the meetings, no one disputes that we need something new. To read The Age of Consent is to be provoked, and left with no excuse for inaction. Because, whether we agree with Monbiots plan or not, we cannot ignore his final question, Well, what are you waiting for? It is a question not for the "affected people" but for the dissidents among those insufficiently disturbed by the status quo to still enjoy the pleasure of reading.

L S Aravinda works with the Association for India's Development. George Monbiot's columns appear regularly in The Guardian of the UK, and are occasionally republished with permission in India Together.

TIGER SANCTUARY : Are tigers back at the Buxa reserve?
MORE ARTICLES
on similar topics ...
MONBIOT