Can the future be what we want it to be?

All commentators find it easy to critique the past and the present but would hesitate to envision the future, given the uncertainties that cloud any such exercise. It is to the credit of Ashish Kothari and K.J. Joy, both from Pune, who have attempted this task in a 683-page tome titled Alternative Futures: India Unshackled (Authors UPFRONT, 2017). 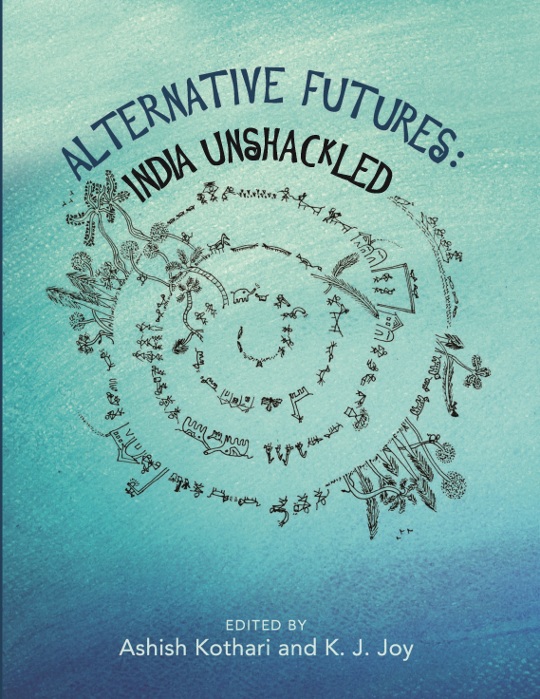 Kothari is one of the three activist sons of the late legendary social scientist, Rajni Kothari and, as this son’s own testimony in the book records, he began “protesting and resisting” from 1978 when he was just into high school. He has been associated with the environmental NGO Kalpavriksh for a number of years and six years ago co-authored an incisive account of the impact of globalisation on the country with Aseem Shrivastava. This was titled Churning the Earth: The Making of Global India (Penguin Viking, 2012) and was widely commented on. Soon after, Kalpavriksh started the Vikalp Sangam process, documenting movements which worked on alternatives “in the entire range of human endeavour”.

Joy likewise has some three decades of grassroots activism behind him, first with the Mukti Sangharsh Movement in Maharashtra, which was to highlight the impact of drought on peasants in the sugar-growing district of Sangli, Sharad Pawar’s political base. This started by mobilising people to benefit from the state’s pioneering Employment Guarantee Scheme, which was hailed throughout the world and became the template for the Mahatma Gandhi National Rural Employment Guarantee Act (MNREGA).  Since 1990, he has worked with the Society for Promoting Participative Ecosystem Management (SOPPECOM), founded by the late visionary, K.R. Datye. Under him, Joy and Suhas Paranjape studied the controversial Sardar Sarovar project and detailed the alternatives that were possible. It was only natural that he was drawn into Vikalp Sangam too.

The common thread binding both these authors is that they have been baptised in a diverse array of people’s movements, which lends an authentic edge to their analysis. The very fact that the book is endorsed by some 20 thinkers, ranging from Jean Drèze and Joan Martinez Alier, and an activist like Jignesh Mevani of the Rashtriya Dalit Adhikar Manch, speaks for itself.

The 32 thematic essays are divided into four sections, beginning with Ecological Futures. In “Changing Natures”, three authors call for a “democratic and dynamic approach to biodiversity conservation”. This contrasts with the exclusionary conservation policies which defined colonial, post-colonial and neoliberal policies. For instance, Jim Corbett, after whom Kumaon’s iconic tiger sanctuary and India’s first is named, spent much of his career as a railway officer, supervising the massive destruction of Sal forests in Bihar to provide sleepers.

As his biographer, Martin Booth, notes in his 1986 Carpet Sahib (as Corbett was mispronounced), “It was Jim’s job to see that between one and two acres of forest went under the axe, the machete and the saw every day…he was personally responsible for the cutting of 500,000 cubic feet of timber.”  And he adds for good measure, “The Indian peasants, for all the ills of colonialism or imperialism, liked being governed…They appreciated being controlled.” Maharajas too had an interest in preserving nature in the forests they owned because they wanted to ensure that these were stocked with wildlife to hunt. In the decades after independence, while sanctuaries have been created for conserving flora and fauna, the Forest Department still exhibits colonial attitudes towards forest protection.

In sharp contrast, the three authors argue “for a holistic approach that integrates conservation ideals with social and environmental justice. They propose a reconciliation ecology that aims for greater conservation values for the countryside that recognises that ethnic and linguistic influences have resulted in heterogeneous, multi-use landscapes with an amazing array of bio-cultural diversity. Any conservation has to embrace community and traditional knowledge as an ethical and moral imperative to distributive justice so that it can address a variety of issues, ranging from inequalities to oppression.”

This unconventional approach isn’t pie in the sky, as it might seem at first sight. Kothari served on the Government’s Expert Committees to formulate India’s Biological Diversity Act and National Wildlife Action Plan. He coordinated India's National Biodiversity Strategy and Action Plan process, which took the route of documenting the role of communities in preserving this all-important part of our heritage.

Another two authors in this section on Ecological Futures cite four issues which hamstring environmental governance: regulatory failure, limits to judicial activism, domination of neo-liberal growth ideas and the assumption that conservationism (not conservatism in the text) is environmentalism. Instead, they argue that such governance will only work in the future if it embraces the essence of environmentalism as a way of life, embracing quality of living, sustainability and environmental justice. They also call for reworking institutional design, so that it encompasses biophysical and social justice goals. This goes in hand in hand with altered value systems, concern for social justice and, above all, a conviction in the democratic process. Needless to say, such concerns have got short shrift in the current political dispensation, starting with the T.S.R Subramanian committee, which took just three months to recommend sweeping changes in six crucial environmental laws.

Shripad Dharmadhikary and Himanshu Thakkar, both of whom may be described as veteran “water warriors”, address the crisis confronting this most precious resource. They call for a paradigm shift where water is seen “as an integral part of ecosystems… [with a] fundamental shift towards the core values of sustainability, equity, efficiency and democratisation”. They cite several examples from Maharashtra (which, incidentally, holds the record of having the largest number of big dams in the country). These include Anna Hazare’s village Ralegan Siddhi, Hiware Bazaar, SOPPECOM’s initiatives with water users associations, the Vilasrao Salunkhe’s Pani Panchayat, and Pani Sangharsh Chalwal (Water Struggle Movement). Elsewhere, they cite the work of the Tarun Bharat Sangh in restoring the Arvari river in Alwar and its Sansad or parliament to manage it, once rejuvenated.

The three other sections are Political, Economic and Socio-Cultural Futures, on all of which space doesn’t permit elaboration. But in conclusion, the two editors indulge in some crystal ball-gazing by “Looking back into the Future” where they pretend they are commenting on India, South Asia and the world in 2100. One major transformation  is the blurring of the divide between rural and urban, a la the current Kerala coastal “rururban” situation. Many urban activists who were preparing a document on the Indian scenario fort the UN Habitat conference in Quito in 2016 endorsed what the Marxist thinker David Harvey describes as “city-making” to bridge this divide. For instance, the provision of hospitals, schools and housing in rural areas would address this issue. To an extent, the AAP government in Delhi has succeeded in setting up mohalla clinics, where a range of essential drugs is provided for a reasonable fee. The Washington Post commented on these and held them up as exemplars for the hopelessly expensive and inefficient US health delivery system.

Such a trend, if fully realised, could reverse the migration to cities and avoid the misery that new migrants face when they arrive, penniless, and eke out an existence in inhospitable – not to mention hostile – terrain. The editors dream that cities would then be on the way to becoming manageable and sustainable. There should be decentralisation of production facilities and services, including health and education. Population would stabilise at 1.5 billion, with birth rates dropping dramatically in the 2020s and 2030s. Societies would accept the principle of knowledge as a common resource, not privatised. Dismantling the army would turn out to be “one of the most amazing transformations of human history”. This isn’t as far-fetched as it appears: Costa Rica has for several years changed swords into ploughshares by disbanding its armed forces.

This is a very important book and the natural corollary to Kothari’s earlier co-authored work, which was a penetrating analysis of the current situation. It delves into what lies ahead and there’s an old quip: “The future isn’t what it used to be!” As the physicist-philosopher Fritjof Capra, reminded this writer in a recent interview, two signs of hope which emerged in the 1960s were the ecology movement and feminism, both promising a new paradigm of development. However, in the 1980s, there grew two countervailing forces: the IT revolution and what it led to – the rise of financial capitalism, which metamorphosed into liberalisation, privatisation and globalisation (LPG). These still dominate the world order though, from time to time, there are indications that one or the other is floundering.

At the Mumbai launch of Alternative Futures last month, I pointed out that even if India and some of its South Asian neighbours do follow these alternative paths, heavily influenced by Gandhiji, there is no guarantee that our other huge neighbour, China, with its top-down bureaucratic and undemocratic structure, will follow suit. All said and done, there is little sign of what Mao once said happening: “A single spark can start a prairie fire.” And if other countries emulate China’s reckless infrastructure spree and consumerism, there is little hope for the planet.

I also observed that climate change, which is in imminent danger of spinning beyond the 2 degrees C tipping point, may put a spanner in the works for any scenario that may be envisaged for the next century. In my megapolis Mumbai itself, the sea level is already rising by 3mm a year; by 2100, that means a 3-metre rise. This will submerge 40 percent of Greater Mumbai and put paid to any alternative prediction of a more just, inclusive and humane city. The same goes, with all its permutations and combinations, for the country as a whole.

But all this that should not detract from the enormous effort of putting together a compendium of this kind, with deals with an enormous spectrum of vital and relevant issues, and offers a flicker of hope for the decades ahead.