The Ministry of Water Resources, River Development and Ganga Rejuvenation (MoWR) of the Government of India deals with one of the most important and vital of all resources, namely, water.

When we think of water management in the country, the pictures that immediately come to one’s mind are of large dams, canals, hydropower plants, and tube wells with water gushing out of them.

Indeed, it would not be wrong to say that for most part of the last many decades, water management in India has essentially consisted of these interventions and has been seen as an engineering task, whose aim is to construct such structures to supply water for various uses.

Given this, it is not surprising that the MoWR’s backbone have been two technical organisations which have been staffed mostly by engineers and scientists. The organisations are the Central Water Commission (CWC) and the Central Ground Water Board (CGWB), dealing respectively with surface and groundwater.

The CWC describes itself as “a premier Technical Organization of India in the field of Water Resources … entrusted with the general responsibilities of initiating, coordinating and furthering in consultation of the State Governments concerned, schemes … for purpose of Flood Control, Irrigation, Navigation, Drinking Water Supply and Water Power Development. It also undertakes the investigations, construction and execution of any such schemes as required.”

The CGWB is “… a multi-disciplinary scientific organization consisting of Hydrogeologists, Geophysicists, Chemists, Hydrologists, Hydro Meteorologists and Engineers…”, and is the “National Apex Agency entrusted with the responsibilities of providing scientific inputs for management, exploration, monitoring, assessment, augmentation and regulation of groundwater resources of the country.”

The two organisations have indeed brought in technical, engineering and scientific skills to water management, but over the years, their role has also come under increasing scrutiny and criticism. 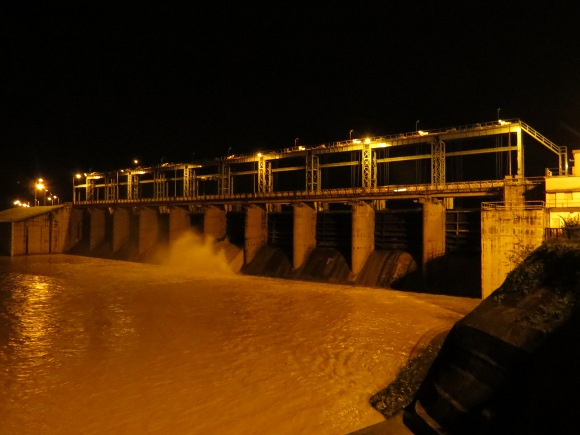 A dam on Rabo river in Chhattisgarh. Pic: Shripad Dharamadhikary

This is because the two organisations represent, and indeed have been responsible for a technocratic mindset that has mostly reduced water resources development to large engineering interventions and attempting to address all problems through technological fixes, at the exclusion all other kinds of knowledge and understanding like social, environmental, agronomy and so on. This has resulted in our water resources and water management facing severe crisis.

It is against this background that the MoWR set up a committee in Sept 2015 headed by former member of the Planning Commission, Dr. Mihir Shah, to suggest “re-orientation  and restructuring of the CWC and CGWB”. The committee submitted its report in July 2016 which has recently been made public by the MoWR. The committee has recommended a far-reaching restructuring of the two organisations, including the merging of the two into a new organisation to be called the National Water Commission.

Before we look at the changes suggested by the committee, it is important to understand why the changes are needed. The report of the committee has itself argued powerfully and in a convincing manner why a change is necessary at the CWC and CGWB, both, in their structures as well as in their perspectives, approaches and their mandates.

The report begins by presenting that the water sector in India  is in  the middle of a serious crisis. If the current pattern of water demand continues, about half the demand in 2030 will be unmet. Water tables even today are falling in India. Water quality is degrading, with many toxic elements being found in water sources.

The report also points out that “twentieth century solutions are not working” today.  Though we have invested Rs. 400,000 crores in major and medium projects since independence, and created irrigation potential of 113 million ha, potential utilised is only 89 m ha, and the gap is growing. Vast storages of water are not reaching the farmers.

The report adds that limits are emerging to further development of major and medium irrigation projects (large dam based projects), and also brings out very critical problems in the Interlinking of Rivers Project, arguing that these kinds of approaches are not likely to help us address our water needs.

The report then presents reasons why the CWC and CGWB are inadequate to meet the current and future challenges of water management in the country. The CWC was set up in 1945 and the CGWB in 1971, and till date have not seen any reforms. The report highlights that “Their [CWC and CGWB] mandate belongs to an old era when dam construction and tubewell drilling was the prime need of the hour, [their]  Capacities and Structure reflect that mandate, and [they] mainly comprise civil engineers and hydrogeologists”. It talks about the need to bring in expertise from many other areas like social sciences, environment, agronomy, ecology etc.

Talking about the CWC, the Report says that

“The CWC is staffed exclusively with engineers … and lacks almost totally a capacity in any other discipline that interfaces with water resource management.

“Further, there is a clear absence of integrated functioning of the CWC with the CGWB to address issues of surface and groundwater interaction and their conjunctive use.”

Regarding the CGWB, which was set up in 1971, the report highlights that not only is it severely understaffed, but again, like the CWC, there is a preponderance of technical staff, even though, like surface water, groundwater science and management is becoming increasingly multi-disciplinary.

Highlighting that while surface and groundwater are not separate blocks but are inextricably connected with each other, the report rues that in spite of this, essentially the two resources are managed independently. It points out that

“… it is also unclear how the CGWB interfaces with the CWC. For all practical purposes, they may be considered as two, almost independent arms of the Ministry with very little co-ordination, discussion and collaboration, working within the silos of groundwater and surface water respectively.”

The report also points out the need for both CWC and CGWB to network with other organisations including academic institutions, NGOs etc. and make the entire planning and implementation of water resources management participatory.

Based on the analysis of the problems with CWC and CGWB, and the needs and challenges of the sector, the report proposes two broad changes.

First of all, it recommends that a brand new National Water Commission (NWC) be set up to deal with water policy, data and governance. It will subsume both CWC and CGWB, but will be more than just the sum of the two.

Two critical changes that will be brought in with the NWC are that this will unify the management of surface and groundwater, and indeed of all forms of water including soil moisture. Second, the nature of the body will change from one dominated by engineers and technical people to a much more multi-disciplinary one. It also talks about the NWC establishing long-term partnerships with a range of other organisations.

The new paradigm has several very important elements. First of all, there is a shift in focus from building and constructing new structures for irrigation to management and maintenance. This is justified on the grounds of large gap between irrigation potential created and utilised on one hand, and the limits being reached in terms of new major and medium projects.

As is well known, large number of rivers in India have degraded, dried up or died out due to number of dams, excessive diversions and withdrawals of surface and groundwater, river bed mining and encroachment and pollution. The report pushes for river rejuvenation based on ensuring (a) aviral dhara – continuous flow including maintenance of connectivity in rivers (b) nirmal dhara or unpolluted flow and (c) swachh kinara – clean river banks.

The paradigm also talks about flood management with a “room for river” approach, which means allowing space for floods and focussing on managing them rather than “controlling” which has involved large dams and embankments, with disastrous results. Newer approaches to urban and industrial water management and transparency and accessibility of data are other important recommendations.

The report lays out the functions and mandate of the NWC that reflects this proposed new paradigm of water management.

The most important lacuna in the report is the absence of a focus on the need to pursue an extensive, decentralised soil and water conservation and rainwater harvesting, groundwater recharging, watershed management program as means of achieving the goals of conserving water resources and to meet the needs of food security and livelihoods. This is an element missing from the description of the new paradigm and also from the mandate of the NWC, even though this is critical to achieve the objectives of “har khet ko pani” (water to every field) and river rejuvenation.

In talking about river rejuvenation, the  report presents the  three elements of aviral dhara, nirmal dhara and swachh kinnara. However, it misses out an important element of ecological integrity. It may be noted that MoWR’s Ganga Rejuvenation program is based on the Ganga Basin Management Plan prepared by a consortium of seven IITs, and in that, the rejuvenation is based on the principles of aviral dhara, nirmal dhara and preserving the ecological and geological integrity of river.

In spite of these and several other shortcomings, the report of the committee represents a very important, much needed change in the current institutional structure of water management in the country, even though it may only be the first step in a long journey.

Shripad Dharmadhikary coordinates the Manthan Adhyayan Kendra, a centre set up to research, analyse and monitor water and energy issues. He was a member of one of the several sub-committees that the MoWR's committee had set up to provide inputs to its work.