A financially sick state corporation in Maharashtra gets an infusion of life from the generosity of MTNL, the Centre-owned phone company. Himanshu Upadhyaya reports.
01 June 2004 -

What does a phone company have to do with developing the Krishna valley? If the corporation in question is the Mahanagar Telephone Nigam Ltd., then the answer is more than phones. The Comptroller and Auditors General of India, the apex audit institution, has rapped this central government owned public sector company for indiscriminate investment practices. In its latest report, the CAG criticizes MTNL for putting its surplus funds into Maharashtra Krishna Valley Development Corporation bonds, flouting the guidelines issued by Department of Public Enterprise.

MTNL, the government-owned telephone services provider in Mumbai and New Delhi, had parked Rs. 2500 million in MKVDC's 10 years bonds in May 2002. These bonds had been issued by the loss-making state-owned MKVDC which hoped to moo up Rs.4000 millions from debt market, but the investor response to this effort had been sluggish. Six months after the issue of the bonds, less than half the amount (Rs.1500 millions) had actually been subscribed, leaving a gaping hole in its plans. Enter the generous phone company, to make up the balance from its coffers.

The MKVDC was established in 1996 to undertake various irrigation and drinking water supply projects along the Krishna river utilizing the 560 Thousand Million Cubic Feet (TMC) of Krishna water allocated to Maharashtra by the Krishna Water Disputes Tribunal Award. The deadline set at the time of establishing MKVDC was May 2000. But while that date has long expired, very little has trickled down to the fields in the Krishna basin. While 80 percent of the dams are completed, MKVDC officials admit that the canal systems to distribute the water have barely begun to be built. Having spent Rs.89000 millions upto June 2003, MKVDC still needed Rs.115000 millions more to complete the irrigation projects envisaged to harness the Krishna river. This means that the submergence and displacement of affected communities whose lands and houses have been drowned under reservoir waters may well have been for nothing.

The trail began with a letter from Maharashtra's chief minister and finance ministers to the Union Communications Minister, requesting him to urge companies under his ministry to make investment into MKVDC bonds.

To return to the tale of controversial MTNL investment, it was on October 09, 2002 that allegations were first made that powerful politicians had bent the rules and guidelines for investments. A news story in The Indian Express and its sister publication, The Financial Express, pointed to irregularities that allowed a profit making central government owned PSU to make a large investment in a loss making Maharashtra government owned corporation.

In January 2003, MKVDC suffered a further setback when the credit rating agency ICRA downgraded MKVDC bonds to C, i.e. 'non-investment grade'. This downgrade followed an earlier one made in May 2002, when ICRA downgraded bonds from previously held LBB grade to BBB grade, leaving them just one notch above the category of junk bonds. This downgrading was triggered by delays in interest payments to bondholders.

In February 2003, when Pramod Mahajan stepped down from the ministry of Communications, Information Technology and Parliamentary Affairs, at least few media persons asked whether this was a demotion and whether it has anything to do with a controversial investment made by MTNL into MKVDC bonds. These questions were dismissed as mere conjectures then and the official explanation was that Mahajan has been made General Secretary of the Bharatiya Janata Party in the run up to elections to various state assemblies. 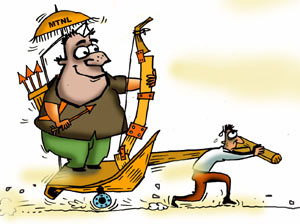 Picture: MTNL rides to the rescue. (Illustration by Farzana Cooper)

On April 27, 2003 two journalists from The Indian Express - Navika Kumar and Prafulla Marpakwar - disclosed for the first time the documents detailing the precise manner in which Pramod Mahajan and Manohar Joshi had sidelined Department of Public Enterprises guidelines on investments to give MTNL's proposal for investing in MKVDC bonds a smooth ride. The news reports revisited the moves by various players about a year ago.

The trail began with a letter written in early April 2002 by Vilasrao Deshmukh, the then CM of Maharashtra and J N Patil, the then Finance Minister of Maharashtra government to Pramod Mahajan requesting him to urge companies under his ministry to make investment into MKVDC bonds. On April 15, 2002 MTNL's Board of Directors decided to invest Rs 250 crores (Rs 2.5 Billion) of its surplus funds in MKVDC bonds subject to concurrence Department of Public Enterprise circular and in adherence to guidelines, if any, issued by the Finance Ministry. Two days later on April 17, the file was placed before Mahajan for his approval. Deshmukh wrote to Mahajan the following day. On May 6, Mahajan approved the MTNL board's decision. The same day he wrote to the then minister in charge of Department of Public Enterprises, Manohar Joshi, asking him if the investment guidelines could be relaxed. Joshi approved the investment after keeping the Finance Minister informed. The investment finally took place on May 10, 2002.

Two days after these revelations made headlines in newspapers, the Department of Telecommunication's vigilance cell announced that a probe has been ordered on the issue. Some time in May 2003, the Central Bureau of Investigation said it is looking into whether or not a case of corruption can be made out in the questionable investment.

Even as CBI was embarking on investigation in May 2003, the poor financial management and imprudent debt repayment planning of MKVDC had become all too obvious. It owed Rs. 22430 millions to various debtors, including a sum of Rs.13570 millions to its contractors, besides smaller amounts to financial institutions and state government as guarantee fees. Not knowing how to meet these obligations, MKVDC even tried to pay off debts to contractors by asking them to accept MKVDC bonds towards payments! But these bonds were simply not attractive enough to find the required money in the market. For instance, reeling from its falling financial health, MKVDC did not permit put options (which allow investors to pre- redeem the bonds prior to final maturation) on its offering.

Now, the CAG report gives credence to at least one criticism mounted against the investment decision taken by MTNL Board of Directors and endorsed by various ministers, stating that the decision contravened DPE guidelines - issued in a circular in 1996 - barring investment in any debt instrument that does not have the highest credit rating, or a newly issued instrument whose final maturity period exceeds one year. The DPE circular had been issued in response to objections that had been raised by a Joint Parliamentary Committee that had inquired into the 1992 stock market scam.

"The investment was also not fully secured, as it was covered only under a guarantee from the State Government but no tangible asset was hypothecated in favour of MTNL.

"This decision to invest ignored the principles of financial propriety as MKVDC was a financially weak and loss-incurring enterprise. These bonds did not have the highest credit rating and the maturity period was 10 years," the CAG noted in the latest report on MTNL. Further commenting on the doubtful hypothecation aspects, CAG says, "The investment was also not fully secured as it was covered only under a guarantee from the State Government but no tangible asset was hypothecated in favour of MTNL. Therefore, the investment was not based on sound commercial judgment and ignored the principles of financial propriety."

It has long been known that government control of lucrative businesses has allowed politicians to transfer gains from these companies to offset losses from economically unworthy enterprises. MTNL's generosity towards a plainly sick and unrelated entity is simply the latest in a long line of such excesses. Ironically, the Centre has indulged in a spate of disinvestments while it continues to driven down the value of its profitable concerns by investing their resources in junk bonds of terminally sick enterprises. Eventually, taxpayers must bear the burden of this largesse.