Over 400 children from 36 schools in Pune participated in the two-day event on 'Children - Disasters and Sustainable Futures' on 4-5 January this year. They gathered knowledge about disasters and how to best manage in such situations, ensuring minimum loss of life and property. Rasika Dhavse reports.
28 January 2008 -

This was the slogan displayed on a huge banner outside the gates of the Film and Television Institute of India, Pune, on 4 and 5 January, 2008. The sylvan FTII campus was the venue for an inter-school event and exhibition called TRRACE - Technology, Risk Reduction And Children Education. The theme of the meet was 'Children - Disasters and Sustainable Futures'. Over 400 children participated in the two-day event from 36 schools in Pune - all wanting to gather more information about disasters and how to best manage in such situations, ensuring minimum loss of life and property. 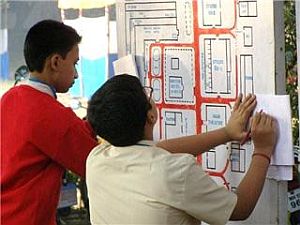 The meet was organised by a Pune-based software firm Neeti Solutions Pvt Ltd, whose computer game 'Snakes and Ladders' designed to increase awareness about disaster management among children is already gaining popularity. Elaborating on the thought process behind the event and the insistence on involving children, Parag Mankeekar, CEO, Neeti Solutions, notes that India has traditionally been vulnerable to natural disasters like floods, droughts, cyclones, earthquakes and landslides due to our geo-climatic conditions. "With the increase in urbanisation and population growth, the impact of these natural disasters is much more. Imbibing a safety culture has become the need of the hour and this awareness must be at all generation levels. Children are very important change agents in this process. By making them aware of disaster management and disaster risk reduction and imparting some basic training to them, we can educate parents and other family members too. It is this strong belief that prompted us to organise TRRACE - a beginning in getting schools and children engaged in and thinking about disaster management," he says.

The meet was indeed, as Mankeekar puts it, a beginning - that crucial first step in making school authorities and also children and their parents realise how important it is to prepare children with the correct information. Two class VIII students - Kavya and Rohan -- inaugurated the meet. Kavya is a national-level swimmer with many records to her credit and Rohan had saved the lives of five drowning children at a construction site in Pune four years ago. The two-day meet was marked by competitions and events that had been planned with a great deal of thought. The task at hand was not just to inform the children, but also to keep them interested, excited and engaged. More importantly, it was necessary that they carry home the message of safety awareness.

What appealed to the children was the demonstration that showed how common household articles like empty buckets, water bottles, coconuts, etc. could serve the purpose of a life jacket.

Competitions like Debate, Snakes and Ladders, Drawing and Essay Writing were individual events that allowed children to show off their personal skills. They also let the organisers gauge the level of awareness in children about various aspects of disaster risk reduction. Events like Evacuation Route and Knowledge Hunt were group events that promoted a sense of team work in the children and also gave them an opportunity to think quick and think right along with others in a moment of crisis.

The demonstrations put up by the CRPF jawans specially trained under the National Disaster Reserve Force (NDRF) and the Rashtriya Life Saving Society (RLSS) proved special attractions for the children. The NDRF demos included different types of rescue methods, e.g., high rise building rescue, building to building rescue, rappelling, etc. They also exhibited and explained various rescue and relief equipment along with their usage. What appealed to the children was the demonstration that showed how common household articles like empty buckets, water bottles, coconuts, etc. could serve the purpose of a life jacket. The RLSS team demonstrated different methods of aquatic rescue (saving a drowning person without entering the water/entering the water). They also showed how to give CPR (cardio-pulmonary resuscitation or artificial respiration procedure) and essential first aid skills.

Though the activities such as debate, essay writing, drawing are common in most school events, the themes at TRRACE were what made them interesting to the students. The debate topics included 'Are human beings victims or causes of disaster?', 'Can children be change agents vis-à-vis disaster management?', 'Is the adoption of technology for disaster management in India an effective solution?' The children could be heard vociferously arguing their points, as they could be seen creating vibrant images on topics such as 'My safe school', 'Scene of a fire', and 'Cyclones/Tsunami'. The essay writing and skit competitions included similar topics such as 'The day the floods came', 'If my house were on fire', 'A news report on tsunami', 'Road accident', and 'Road etiquette'.

Says Aishwarya Lele, a class VIII student of Millennium International School, "This is different from the usual sports, dance, or math competitions we attend. There it is just a presentation of what we have prepared and already know. Here, even if some of the information is not new to us, it has served the purpose of making us aware of disasters and how we can play a role in disaster management." Adds her schoolmate Sameer Deshmukh, "We see and read the news about any disaster, but it is (usually) far removed from us. This event has made us realise we can be victims too and having the right information helps. We are taking home this message, something that we don't get from other competitions." 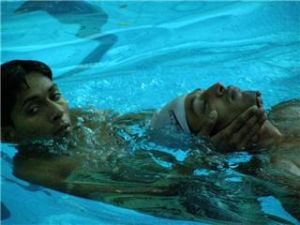 Demo on how to pull a drowning person out of water. Pic: Neeti Solutions.

"Children are the perfect target audience for such activities," insists Leena, a teacher at Shikshan Prasarak Mandal, Nigdi. "They may not have physical strength, but armed with the right knowhow, they can make a difference in any critical situation," she avers. Sub-inspector Ramesh of 145 Batallion CRPF, based in Talegoan, which had put together the 'Exhibition-cum-Workshop on Community Awareness', says, "Children are excited to see and learn something new. This information dissemination comes to them at the right time; they learn to respond correctly from this young age. At this event, I could see they were especially interested in the first aid lessons and the rescue techniques. This is a useful first step in building morale and motivation, which goes a long way in creating aware and alert citizens."

Leena points out that the new environmental science curriculum of Std IX of the Central Board does include a few chapters on disaster management, but there are no practicals to support the book knowledge. "This event has come at the right time. The children are thoroughly satisfied because they have now seen some practical demonstrations," she says. Leena is happy to note that on the way back to school from the event, the children discussed the day's activities at length and put forth a variety of new ideas. They even talked of holding a workshop back at school for the benefit of those who did not attend this event.

That in fact was something almost all the participating children wished to do - go back to their schools and share the information they'd gathered with their schoolmates - as only 10 children represented each school. Says Kavita Majumdar, teacher, Jnana Prabodhini, Nigdi, "Such events/workshops as TRRACE should be conducted within school premises so that the entire school benefits."

Just as much as they enjoyed the event, the children were quick to realise what could have been better. The general consensus was the event should have been more activities-based. Ankit Namboori and Sanika Gawhane, class VIII students of Air Force School, Lohegaon, point out, "Instead of so many lectures, they should have had more activities where they teach us how to make rescue kits from home articles - that would have been really useful and interesting." Deepa Kulkarni, a teacher from Millennium International, makes a similar observation, "It was informative and entertaining, but more visuals were definitely needed. Children cannot concentrate on mere lectures after some time."

Those shortcomings notwithstanding, students and teachers alike responded favourably to this first step toward involving schools into the larger scope of disaster management. Mankeekar and Neeti Solutions have lined up a list of post-event activities: printing a calendar with photos, drawings and information on disaster management, conducting a summer camp at the NDRF campus at Talegaon, developing more games on the lines of Snakes and Ladders on the theme of disaster risk reduction, and conducting a workshop for teachers for DRR training.

Schools, if the response of the teachers and children at the event was anything to go by, are looking forward to these followup activities. This first step has kindled interest in school authorities to arrange for more such activities for their students. The verdict is unanimous - we need to be armed - right from a very young age and with the right information, so that in the future, we will indeed know no disasters.