Three generations of a farming family in Bagalkot district in Karnataka campaigned to drought-proof the fields and to conserve the soil and water. Their inspiration was a 170-year old book that until recently remained only in manuscript form. Shree Padre reports on the enviable results.
23 August 2005 -

"Yes. During the last three years, the drought has affected a good many people. But if you carefully analyse who were affected by drought, you'll find that only those who haven't constructed bunds across their fields have suffered. Those who have nicely raised bunds haven't experienced the drought", says 72-year old Hanumappa Chandappa Mukkannavar of Bagalkot district in Karnataka. His own experience is adequate proof, he says; since 1972, his fields haven't failed him even once! There were many 'drought years' in between, but even in years of very low rainfall, he always managed to raise enough grain to feed his family. Hanumappa isn't alone, either. There are thousands of farmers in this region who have defeated the drought. At least 10 villages in Hungund taluk of this district share his success.

Bagalkot, the weather records remind us, is a district that gets the least rainfall in the state (543 mm annually). The last three years were drought years, with an average rainfall of 390 mm. The productive rainfall may have been even less - farmers in the semi-arid area grow food grains under rain fed conditions that can't withstand very long gaps of rain in the monsoon, and in even years of normal rain, their crops can fail if there are long gaps between showers. Despite this vulnerability, most of the villagers in Badavadagi, Chittaragi, Ramavadagi, Karadi, Kodihala, Islampura, Vamdavadagi, Kesarabavi, Hungund, Tumba, and elsewhere didn't have to buy food grains from outside. Nor was there migration due to hunger.

The secret of this 'escape' from drought is diligence. These farmers had painstakingly prepared their lands to harvest all the rain, even if a single good shower was all that they got in a cropping season. Hanumappa himself adopted these 'drought-proofing' techniques for his fields as far back as 1972.

The larger the leveled area, the more of the crop that gets moisture from a single rain. Even if the surrounding areas cannot support any crop, this moist belt yields its harvest without fail.

The principle is a simple one. Put good earthen bunds across the slopes. Construct holagatti or gumdavarthi (waste-weirs) to safely allow the excess run-off outside. And as a still advanced step, level the sloping fields into smaller plots without the slopes. The last method requires huge investment, and only very few farmers take this step, and that too in a phased manner. The success of drought-proofing critically depends on the amount of amgala (well-leveled field area) a farmer achieves. The larger the leveled area, the more of the crop that gets moisture from a single rain. Even if the surrounding areas cannot support any crop, this moist belt yields its harvest without fail.

Who taught these drought-proofing measures to the villagers here? Three generations of a farming family of Hungund campaigned with a missionary zeal to achieve this. Mallanna S Nagaral, 54, is the latest in the line of these educators; his grandfather Sanganabasappa Nagaral was the first to set off on this path, and handed it down to his son Shankranna, and then to Mallanna. The Nagarals demonstrated the success of these measures in their own fields. Setting their professions aside, they then traveled widely inside the taluk to physically guide and supervise the construction of bunds and weirs. Shankranna Nagaral has written many vachanas (poems) to make people aware about soil erosion, the importance of bunds, crop rotation, and the necessity of tree-based farming, among other things. Most of these vachanas are still in manuscript form safe, in Mallanna's custody.

The mantra of Nagarals was this: 'Ara-baradaagoo aaraane-emtaane bele baro hamge hola tidkolli'. (Prepare your fields so as to raise at 6 or 8 annas - 16 annas made one rupee in the old currency system - crop during half-rain/drought year)

Sanganabasappa's original motivation to take up the cause of soil and water and drought proofing lies in a unique book written by a seer 170 years ago. Decades ago when Sanganabasappa chanced upon this book, it was still in manuscript form, and Sanganabasappa wanted a copy. Lacking any other option, he prepared a handwritten copy himself, working for months together. The contents were so impressive that Sanganabasappa read it 6-7 times. In the process, it turned out to be his guiding light for the rest of his life. After implementing the guidelines given in the book, he realized that this would save lakhs of dry land farmers' bayaluseeme (flatland) from the deadly jaws of drought. 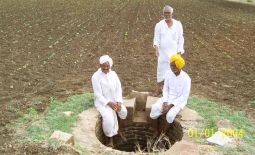 This book, Krushi Jnana Pradeepike (KJP), now available in print, is unique. It was written based on the time-tested practical knowledge of farming. Ghanamatha Nagabhushan Shivayogi Swamiji, the author of this book, hailed from Daroor, in Andhra Pradesh. He had spent a good part of his life in northern Karnataka. The 350-page text is full of practical information to help farmers grow a variety of crops, to prepare manure and to conserve soil and water. Ten pages are allotted for soil and water conservation and drought-proofing. The book, in Kannada, was published only after Shivayogi Swamiji's death. So far, it has sold more than 40,000 copies. Says D.D. Bharamagaudra, a well-known organic farmer of Yelavatti, Karnataka, "KJP is the scripture for the farmers pursuing dry land agriculture in Karnataka. It is unfortunate that the book isn't known to many farmers even now."

In 1969, Mallikarjuna Swamiji of Sangapura Mutt, Gangavathi, realized the importance of the book, and had it published. Since then, it has seen 9 editions, including one from Hampi University. Mallikarjuna Swami says, "I am so impressed by Nagabhushan Shivayogi Swamiji's writings that we went on a study tour to Andhra Pradesh to learn more about him. I have a collection of all his books, except Jalashilpi, which I hope would throw very useful light on the issue of water. KJP has already been translated into English. Efforts are on to bring it out in Hindi and Telugu as well. I am suggesting to our University to encourage a student to take up doctoral studies on the work of this great seer." 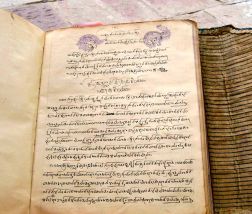 The hand-written copy Sanganabasappa has prepared.

Three generations of Nagaral family's preachings hasn't gone in vain. From decades, farmers of Hungund taluk have been spending 20 to 30 lakh rupees annually for soil and water conservation as well as drought-proofing. At least half a dozen workers trained under the late Shankranna Nagaral have full-time employment in this task. Directly or indirectly, at least 500 families in the taluk earn their bread from drought-proofing work. All this work is carried out without a single paisa of subsidy from the government. Though a bit expensive, wherever construction of bunds, waste-weirs etc. was taken up systematically, no drought was able to snatch away a particular farmer's harvest.

When this success story of drought-proofing was brought to light at the recently held jalajatha - a water-awareness mass campaign of Bagalkote district - Mallanna was a star attraction in the rural meetings. Now the Bagalkote District Collector K S Prabhakar is planning to bring out a video documentary titled 'best farming practices' including the drought-proofing techniques demonstrated by Nagarals.

Shree Padre is a journalist with many years of experience in agricultural reporting. He is the author of several books, including one on rainwater harvesting, published by Altermedia. Mallanna S Nagaral can be contacted at (08351) 260303. Mallikarjuna Swamiji can be contacted for copies of KJP in Kannada or English, at (08533) 231168.