Rainwater harvesting isn't just for drought-prone regions, nor is it an entirely recent development. Shree Padre travels to an old church in Dakshina Kannada district, where despite living in one of the rainiest places in the nation, monks put up a roof water harvester many decades ago, and maintain it to this day.
13 September 2005 -

Tanka, the centuries-old rooftop water harvesting system, is common in dry states like Rajasthan and Gujarat. But rainwater storage in cisterns is a relatively new development in states like Karnataka. The Dakshina Kannada district, in particular, is one place you wouldn't expect to see such a cistern; after all the district gets 4000 mm of rain annually, nearly four times the national average. It is surprising, therefore, to learn of a 75-year-old tanka in this rain-rich corner. Even more intriguing, this system is still working, a fact not well known outside the Saint Fidelis Friary of Farangipete, where it sits. And as if to complete the mystery, the church is situated only a stone's throw away from the Nethravathi river. 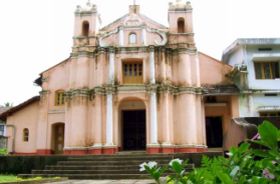 The facade of the church is the only portion still remaining from the original structure. (Picture by Shree Padre)

This church, built by the Portuguese in 1526, was the first one in Madras State in this district. After the Portuguese left the country the church was abandoned, but renovation was taken up again in 1930. The facade of the chapel, the only remnant from the original 15th-century building, is still in amazingly in good condition.

What prompted the friary to take up rainwater storage in an era when water shortage was unknown, and at a location so close to an endless supply? Salt, it turns out, is the problem. In this coastal region, sea water often enters into the river at summer's end. And this may be one reason the priests took to storing water.

Fr. Otho, 80, a priest who has spent most of his lifetime here after joining the church in 1941, suggests another reason. "The well is in far lower place. To lift the water from there at that time, two of us had to spend all our energy to operate the hand pump. Water had to rise up in a narrow tube." This might be another reason for going for RWH. Now, the well water is not potable. It is slightly brackish even now - during monsoon. Fr. Cornelius, the current Senior Priest at the friary, explains this further: "We pump the river water to irrigate our coconut garden in summer. At that time, the river water turns brackish. The salt particles deposited in the garden get down to the well in the monsoon."

In 1930, when the church was renovated, the rain storage system was built. A French priest, Fr. Symphorian was the architect. While constructing the monastery the cellar below the verandah was converted into a storage tank. It measures about 20 x 9 x 12 feet and holds about 60,000 litres. An iron pipe from the roof brought water to the cistern. Without electricity to pump water, the toilet and the wash area were wisely located in a lower elevation, allowing water to flow here by gravity. The older galvanized pipes have now been replaced by PVC. This technique of storing water below the room of a building was unknown in the southern states in that time; perhaps Fr. Symphorian had seen or himself taken up such work in France earlier. 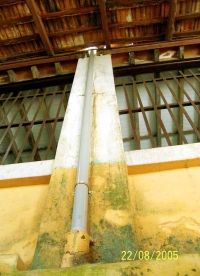 The downpipe transporting roof water to the tanka. (Picture by Shree Padre)

Clear information about the management of the stored water is not available. According to Fr. Cornelius, it was used only for non-potable purposes, and therefore the roof water was directly fed into the tanka without filtering. But conservation set in as a laudable goal early on. Fr. Cornelius remembers, "You see, I was a student here. At that time, we used to collect water from the pipe in buckets and carry it to bathroom, etc. Only one bucket was allowed for bathing. Of course, now, we have fitted a motor. Now we have other water sources too. And you know what happens under such circumstances."

Decades ago, the Nethravathi turned brackish only in March each year. But the recent construction of a vented dam in nearby Thumbe has made things more difficult. Now often the water is brackish even before January. The church procures drinking and cooking water from some nearby sources, but these aren't reliable. Assuming that water problems will worsen in the future, the church has constructed a new 25,000 litres tank. "If the available sources fail, we will immediately connect the down-pipe from the roof to this tank", says Fr. Cornelius.

One simple, but important lesson in water conservation is this: Make the maximum use of rain water. If not for potable purposes, it can be used for all non-potable needs. In many places, there is scope to catch rain in available storage vessels or sumps. This habit will save valuable groundwater and expenses on energy. In heavy rainfall areas, industries and establishments that need huge quantities of water can take up rain storage arrangements. By building underground tankas they can give their bore wells a break for up to four months - this means 33% savings in electricity charges. A simple addition - a full-fledged filter - could bring much of the rain water to potable levels too. Depending on its usage pattern, a 60,000 litres tanka can harvest 4-6 lakh litres of water each year, even more if the rainfall is distributed well around the year.

This tanka may well be the first rainwater harvesting system in the Malnad belt, a heavy rainfall area, where annual precipitation averages between 2500 and 4000 mm. It has potential to inspire a lot of people about rainwater usage, an unexpected but necessary education in this region. There is acute drinking water shortage in many parts of the district. Every year, the district administration spends a considerable amount on tank water supply. It is only recently that the district administration is waking up to realize the possibilities of rainwater harvesting, and the absolute need for this even in a rain-rich area. Of late, State government schemes have been introduced to install rainwater harvesting systems in schools and villages. The district administration and interested persons might well pay a visit to Farangipete, and its decade-old answers.
Shree Padre
13 September 2005