"Of course I would like to be married to a nice boy and have a small family. Who doesn't?" asks Ganga Khatale, 31, with a fleeting twinkle. Amidst a desperate situation of suicides that even pushed two young girls to take their lives over marriage tensions, Ganga seems courageous in her hope. Varada Hardikar reports.
17 February 2006 -

At 31, Ganga, a dirt-poor, farmer's daughter is looking at spinsterhood for life. This slim, dusky girl in pigtails from a nondescript village in central India region of Vidarbha is the unlikely victim of a phenomenon that she scarcely understands. Ganga, a lower-caste Dalit, never aspired to much, but marriage was a thing she took for granted. Inevitably though, she has become a piece of the tragedy unfolding in the countryside and her small dream of marriage lies shattered. Her sacrifice of marital bliss now seems small when others are staring at death and a fate worse than death. 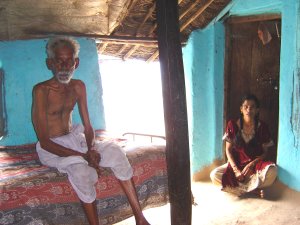 Steeped in debt, Shamrao Khatale, a Dalit cotton farmer, died in October 2005 because could not afford medicines. His daughter, Ganga, now 31, never aspired to much, but marriage was a thing she took for granted. (Pic: P Sainath).

In villages like Ashti, where Ganga lives, girls are married by 20-22 years of age. While her father, Shyamrao Khatale was alive, Ganga thought it was just a matter of time and waited patiently for her turn as her two elder sisters were married off. But all that changed, when her father died in October 2005. He had been sick for a long time, and with no money for medicines, he simply passed away, lying in the small, three-room, mud hut with a low thatched roof.

"My father married off both my sisters. That was no small feat since he had to take more loans. He had previous unpaid loans for farming." In the face of repeated crop failures, loans had become a way of life. He tilled cotton on four acres of un-irrigated land. And like most in his area, he had sown Bt cotton seeds, the genetically modified variety, in the hope of bumper produce and less pest menace. But these inputs were costlier and he needed a loan to tide over the expenses. The loans from private moneylenders were not cheap at 60-120 per cent interest rate. With the banks and cooperative bodies turning their backs on the farmers, the rural credit system in these parts collapsed a decade ago. Loan sharks flourished, extracting their pound of flesh.

Expensive seed inputs from big companies failed to deliver on promises of high yield and pest resistance. Also, during the 2005-06 season, spurious seeds were sold in an unregulated market, resulting in failed crops. Periods of inclement weather also threatened to tip the scale. Caught in the web, the noose was further tightened with the slashing of the prices by the government in the face of freely imported cotton.

"This is not just our story. It is now happening all over the village and even the entire region," explains Ganga in a small voice. The situation is worse than Ganga could ever imagine, with at least one suicide being reported every 24 hours. This season, widows too started taking the death route. How bleak the situation really is, is brought home by the fact that daughters, in the wistful hope of sparing their beleaguered fathers the dowry burden, are thinking of extreme measures. Two young girls in different villages have already ended their lives, both alluding to family tensions over marriage in their suicide notes. Death seemed to offer the only solution.

Ganga feels she and her family have but one option: work the soil in the hope that coming crops would be good enough to repay all the loans.

But her task seems as hopeless now as it seemed to her father and brother, because nothing has changed.

•  Shamrao breaks his appointment
•  Another farmer ends his life

"I don't know what I should do. My mother is old and insane with grief. My younger brother, Prabhakar committed suicide last year in debt and distress. My two elder brothers have their families to run which they can hardly manage since they too have lost their mental health."

The situation is desperate, but it is evident that the courageous Ganga wants to make it work and not give up. Yet. "Of course I would like to be married to a nice boy and have a small family. Who doesn't?" she says with a fleeting twinkle. "But at this moment my family needs me more. I have to help my mother and shoulder responsibilities."

With her eyes bright with unshed tears, she says: "I saw my father's daily struggle. He tried everything but failed. He was a proud man, he did not like owing money nor that they (the moneylenders) had started visiting us almost everyday for repayment. It was too much to bear."

"She wishes that she had an education. Then she could have had a job in the city and taken all of us with her," murmurs Ganga's sister-in-law from the corner. "Yes", concurs Ganga, "if I had a job then maybe I could have helped pay all the loans."

Her brother Prahlad says that relatives and neighbours want to help them but simply can't because they too do not have any money to spare. He notes that they did get some compensation money from the government after his brother committed suicide. "The cash part of it was soon gone to the creditors. We get Rs.450 per month on which we make do. Rules won't allow us to touch the fixed deposit of Rs. 70,000," he says.

What would she do if she got that money? Thinking for a few moments, Ganga is bewildered and says, "I don't know." Her face mirrors the conflict. Having lived on so little for so long, so much money is overwhelming. On the other hand, in face of so many needs and the ever present shadow of moneylenders, the money is dismally little.

Ganga has reconciled herself to the fact of being a spinster and accepted that she would continue farming. She sighs as she realizes she and her family have but one option: work the soil in the hope that coming crops would be good enough to repay all the loans. But her task seems as hopeless now as it seemed to her father and brother, because nothing has changed.

Ganga and her family may work hard but how can she succeed when the thing called 'The Market' and its working is beyond her control? Things were taken out of her hands since the time a clutch of nations decided that the developing world needed 'liberalisation.' So when India and countries like her started progressively toeing the lines of World Trade Organisation and the World Bank, Ganga and her father were put on a road to doom, according to farmers' leader and agriculture analyst Vijay Jawandhia.

Import duty on cotton was reduced to a mere 10% - and may be reduced further, says Jawandhia. Simultaneously output prices for cotton farmers, like Ganga's father, went down sharply. Unfortunately that was just a part of the story.

The opening of the economy in 1991 also scripted the end of traditional farming methods. The life-sciences multinational Monsanto (through subsididary Mahyco-Monsanto) and a number of Indian seed companies (who have licensed Bt technology from the former) have been selling Bt cotton seeds with the approval of the government. Cotton growers in Vidarbha were encouraged to take up the genetically modified seeds. The seeds were costly to say the least (Rs. 1700-2200 for 400 gram packets as compared to Rs. 50 to Rs. 400 for traditional varieties). As noted earlier, in the 2005-6 season, they failed in Vidarbha on all fronts -- high yield, better quality and savings from lower applications of pesticides.

As compared with Bt seeds, hybrid seeds that were being sowed even in the previous years have performed better. Brahma and Banni - the two common varieties, or LRA, which is among the widely grown varieties in region - did better than Bt. The Commissioner (Agriculture), Maharashtra, S K Goel, has been on record that Bt cotton sowings have failed in Vidarbha. Inputs dealers in Yavatmal have also been quoted by local dailies as saying that Bt seeds have performed badly, and farmers have incurred huge losses on that count.

Farmers have reaped a tragedy of indebtedness that is still devouring them at an alarming rate. Among them was Shyamrao Khatale. But with no voice, people like his daughter, Ganga, continue to be the victims of a tale where life seems worse than death. "I have left it all to the Almighty," shrugs Ganga when asked of her future. Can her faith bring her out unscathed or will she fall to the vicious cycle as well? As of now, there are no answers for Ganga, only some hard questions.

Varada Hardikar is a freelance writer based in Nagpur. She was formerly with the The Hitavada