Are Himalayan glaciers not melting?

A new study stirs up an old debate - whether the melting of the Himalayan glaciers is only evident at lower reaches, and the higher altitudes are in fact adding snow. Darryl D'Monte reports.
22 March 2012 -

One would have thought that the controversy over the wrong deadline, fixing 2035 as the date by which Himalayan glaciers would disappear due to global warming, in the UN Intergovernmental Panel on Climate Change (IPCC) in its Fourth (and latest) Assessment Report in 2007, would have been set to rest after the IPCC admitted its mistake and withdrew the offending paragraph. But uncertainty still rears its head from time to time.

The latest to tread on this tricky terrain is a team of US scientists led by Professor John Wahr of the University of Colorado. Their findings, published in the authoritative journal Nature in February, claim that the mountain chain from the Himalayas to the Tibetan plateau has lost no ice over the past decade, contrary to scientific consensus. The study is said to be the first to survey all the world's ice caps with the use of satellites.

In the world as a whole, the contribution of melting ice caps and glaciers to a rise in the ocean level is much less than previously estimated, the study says. Apart from the two largest caps, which are Greenland and Antarctica, the reduction is largely due to the lack of ice loss in the Himalayas and other high peaks of Asia. It estimates that globally, between 443 and 629 billion tonnes of melt water are added to the oceans every year.

This will raise sea levels by around 1.5 mm a year, along with 2 mm a year caused by the oceans expanding with global warming. According to a Bristol University glaciologist, who was not part of the study, this means that sea level rise by 2100 will only be around 5 cm, while present estimates range from 30 cm to 1 metre. He terms this "a very small modification".

Prof Wahr hedges his findings by pointing out that their study analyses only eight years of data, from 2003-2010, which is insufficient to gauge even the following eight years, let along nine decades till the end of the century. What is more, the extremely variable nature of the monsoon, which is an Asian natural phenomenon but one badly affected by climate change, means that there can be a difference of billions of tonnes of ice forming from one year to another. 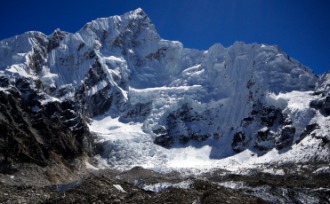 Seven major rivers originating in the Himalayas and Tibetan plateau meet the needs of 1.4 billion people.

•  Floods in India, made in China
•  Climate sceptics get it wrong

He attributes the discrepancy in findings to the fact that Asian scientists do not have access to satellite data and tend to study glacial melt with monitoring stations in the lower reaches of the Himalayas, which are definitely melting. Indeed, the bulk of the world's 200,000 glaciers are measured using such equipment in just a few hundred sites. But, he claims, the melting of lower reaches of Asian mountain ranges - amounting to 50 billion tonnes a year - in what is often dubbed "the third pole" is compensated for by snow falling on the higher peaks.

Prof Wahr points to the compelling need to study the state of these mountains because seven major rivers originating in the Himalayas and Tibetan plateau meet the needs of 1.4 billion people. This would make it the most populous region in the world to be severely impacted by climate change. He is careful to observe that elsewhere in the world, the earth's ice, which includes Arctic sea ice, snow cover and glaciers are indeed melting.

The study contradicts the IPCC's earlier wrong assessment that "Glaciers in the Himalaya are receding faster than in any part of the world and, if the present rate continues, the likelihood of them disappearing by the year 2035 and perhaps sooner is very high if the Earth keeps warming at the current rate." As is now well documented, a series of errors was compounded, beginning with an article in the Delhi-based fortnightly Down to Earth, then cited by the well known British science writer Fred Pearce in the New Scientist and picked up by a World Wide Fund for Nature report.

In his recent extensively documented book, The Politics of Climate Change and the Global Crisis (Orient BlackSwan), Praful Bidwai devotes a box to this controversy which runs at the bottom of 14 pages. Prof Syed Iqbal Hasnain, who in the 1990s was in the School of Environmental Sciences at Jawaharlal Nehru University in New Delhi, authored a study on Asian glaciers for the International Commission for Snow and Ice, where he made this claim, which he later denied. It finally found its way into the IPCC report, a major blunder for the world's leading source of data on climate change.

It was also a personal and professional embarrassment for Dr Rajendra Pachauri, head of the IPCC, who had to ultimately take responsibility for the error. It proved a blessing for the climate sceptics who used it as a stick to beat the IPCC and question the credibility of Dr Pachauri. For reasons best known to him, Environment Minister Jairam Ramesh at the time added fuel to the fire by claiming that accelerated melting of Himalayan glaciers was the fervid imagination of the "Western media". This was highly ironical, considering that it was the UK mainstream conservative press, like the Sunday Telegraph and Sunday Times, which was at the forefront of the attacks on the IPCC, giving ample publicity to rabid sceptics like the Briton, Richard North (see this link).

Once the controversy was laid to rest, the scientific consensus was clear that the Himalayan glaciers are melting, though no one can as yet estimate by when. Bidwai cites the Nepalese Department of Hydrology which has found that "average temperatures in the Himalayan ranges have been rising at a rate which is more than four times the global average in the past three decades - 0.06° C a year."

A study led by Dr A Kulkarni of the Indian Institute of Science in Bangalore, titled "Glacial retreat in Himalaya using Indian Remote Sensing satellite data", shows that Asian scientists are in fact using satellite imagery, although it may not be as sophisticated as Colorado University's. It states: "Temperatures in the Tibetan plateau have risen by an average of 0.16° C per decade (and 0.32° C in winter) over the last 40 years. This was up to three times the temperature increase in other Chinese regions." Bidwai points out that glacier retreat in the Himalayas has been documented by satellite observations and aerial photography as well as direct on-site measurements at a number of sites.

During the Copenhagen climate summit in 2010, the well-regarded International Centre for Integrated Mountain Development, based in Kathmandu, held a session where scientists from mainly Nepal, Pakistan and India discussed ways and means of coordinating research on glacial melt. Prof Hasnain, then with The Energy and Resources Institute in Delhi, attended it too. This research is admittedly a sensitive issue, given the tensions over borders, but scientists have tried to overcome mistrust and share data. The extreme urgency of understanding the complex process of climate change ought to take precedence over diplomatic and security concerns.

There is another reason why it is difficult to believe that Himalayan glaciers are not melting at an accelerated rate. This is the regional phenomenon known as the "Asian Brown Cloud", which first surfaced before the World Summit on Sustainable Development in 2002 and was then put in cold storage due to vehemence with which Asian (mainly Indian) scientists and the political establishment denied that any such thing was taking place.

Now, the foremost authority on this atmospheric build-up is none other than an Indian, Dr V. Ramanathan, from the Scripps Institution of Oceanography in La Jolla, California. He has shown conclusively that in the Asian subcontinent , suspended particulate matter in general, and soot and to a lesser extent unburnt hydrocarbons in particular, are causing a brown haze over the entire region.

When these particulates of soot get deposited on mountains, they increase melting because the snow no longer reflects sunshine as it used to. The soot is generated from inefficient cookstoves, using farm or forest waste and, to a lesser extent, the use of adulterated diesel in trucks plying in the region. To measure the impact of this brown cloud (sanitised by prefixing it with "Atmospheric" instead of "Asian" in the interests of political correctness) these scientists used unmanned aerial vehicles which were positioned between 0.5 km to 3 km over the Indian Ocean.

In conclusion, therefore, the study by Prof Wahr should in no way detract from the overwhelming evidence to the contrary, even though every new scientific claim ought to be rigorously scrutinized and not dismissed out of hand.