A green foundation for prosperity

There is much that the nation's farmers need to hear in the Green Foundation's message, and avoid past mistakes. But there is also a positive message, reminding farmers that "traditional farming will help you gain control of your finances and your food security." Sudha Narasimhachar reports.
20 January 2007 -

"In the olden days, if the rains failed one year, we used to migrate to the nearby towns and cities in search of jobs, as coolies. Our children used to be malnourished and fall sick often. Today, we never go anywhere. We are occupied throughout the year and we have enough to eat and keep ourselves healthy, besides even creating funds for emergencies".

The confident voice behind that observation is that of Nanjamma, who along with a dozen or so other women manages the Community Seed Bank in Thali, about 65 kilometres from Bangalore, in Tamilnadu. In this place, fondly called 'Little England' by the British for its excellent weather and lovely green valleys bordering the forests, Bangalore-based Green Foundation has established a Community Gene Bank and has done excellent work to propagate and preserve seed diversity. When I visited, nearly every farmer in this area spoke the language of conservation and planning, their sentences filled with talk of seed diversity, hybrid cultures, dry-land farming, water conservation, food security, seed banks and participatory plant breeding!

Hombalamma's farm is a living example of how all this can change the lives of farmers who led very insecure lives just 7-8 years ago, in an area where nobody is sure of whether it will rain less or more the next time around. I walk down to Hombalamma's farm on a pathway lined by wonderful wild creepers with thousands of bright maroon flowers; the atmosphere is absolutely blissful, with none of the noise and pollution in the city only an hour away from here. Her six acres spread down a shallow valley, in which she has grown 52 varieties of crops. She grows nine varieties of ragi alone including the Kari kaddi and Pichakaddi Ragi, which were near extinction. The crops are alternated; til and mustard border ragi fields. Vegetables that can grow in the shade are grown under the tamarind trees. What is most astonishing is that Hombalamma has no source of irrigation. She wholly depends on rains. 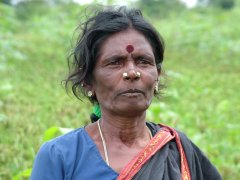 She claims she is 70 years old, but that is hard to imagine, seeing her bustle about her farm. She has five sons and 15 grandchildren; a 15-day-old girl child she found abandoned in the fields and brought up is now one of her daughters-in-law. She led us down her farm, pointing to each crop. "This is Sri Lankan lady's finger, this is American beans, this is til, this is sesame, this is 'same', a minor millet ...", she rattles them off as we wander along.

"What if the rains fail?"

"I have crops that suit dry-land farming, and do not require much water. Since I have so many varieties of crops, which yield fruits at various intervals, even if one or two of them fail, I do not feel the pinch. I grow vegetables, fruits, food grains, oil seeds, tamarind, groundnut, flowers and much more. Look at my farm. It is along the slope of the valley. The natural gradation of the land is maintained and crops grown in rows along the circumference to check soil erosion. Water never gets stagnated." She points to the tank that she has dug. "All the water gets collected here finally, bringing along with it, fertile silt. I never use this water. It just cools the atmosphere and recharges the ground water. Once in a while, when the water level goes down, I collect the silt and use it as fertiliser", she says.

Each of Hombalamma's five sons owns six acres of land. All of them follow these policies. "We do not use chemical fertilisers or pesticides. We have a number of pest repellent herbs and shrubs, which we plant along the border. I also make poochi marundu (pest repellent) by extracting the juice of nine varieties of such leaves. I even supply this to the other farmers here. I use only vermi-compost and organic manure like cow dung, sheep dung, leaves and roots of weeds", goes on Hombalamma. They make all the agricultural implements themselves, own two pairs of bullocks and a few cows. They are so self sufficient that the only things they need to buy are scented soaps, which the grandchildren demand these days!

But is she satisfied with the yield, which may seem less than the yield of hybrid varieties she has planted in earlier years? "Of course, I am very much satisfied. Green Foundation folks have really opened our eyes to the truth. When I used to grow hybrid varieties, on many occasions, we would end up having nothing, and working as coolies. Our children used to fall sick so often. But since I adopted this method, never have we gone hungry or fallen sick; we are very healthy rather. I am busy all year through, because crops keep maturing one after another. After feeding our family of six, I am able to sell nearly 400 bags of ragi alone, besides paddy, vegetables, groundnuts, oil, tamarind and many more things. I extract castor oil and sell them in bottles. I roast groundnuts and sell. I sell 'poochi marundu'. I go to the Banashankari shandy in Bangalore and sell them directly", says Hombalamma proudly.

Hombalamma won the Shrishti Award - given by the Society for Research and Initiatives for Sustainable Technologies and Institutions, Ahmedabad, to grassroot inventors, innovators and ecopreneurs; she has been elected to the local Panchayat, commands respect in all the villages around, and dons a satisfied smile. But even the great strides she has made tell only one success story of one small village, where the Green Foundation has worked with farmers. There are hundreds of similar wonderful stories that the organisation has made possible around the country.

"On one side we keep hearing people fighting against the unfair terms of WTO, patent laws, privatisation, border disputes, languages, global colonisation by multi-national companies and its ill effects on the eco-system, culture and tradition and so many such issues. Of course people have to keep their eyes and ears open to what is happening around them and raise their voice against injustice," says Green Foundation's Krishnaprasad, who is very passionate about what he is doing. "But if we spend all our time only in fighting, hoping that the issues will be resolved, we will be the losers. Thus, besides the fight, we also have to have some action oriented plan and move on. Green Foundation does exactly that".

And so it does. The organisation works to conserve and sustain biodiversity, protect farmers' rights, strengthen community seed banks, and remind farmers of their own strengths and knowledge, which they had sidelined thanks to the hybrid culture in the name of Green Revolution. There is much that the nation's farmers need to hear in the foundation's message: food security has not eliminated hunger; thousands of varieties of food grains are getting extinct; the soil and eco-system are being damaged by chemical farming; income security for farmers is so poor that one season's bounty is no guarantee that a farmer won't end up doing wage work the next season. And most importantly, among all these truths, the Foundation adds one other message, this time a hopeful one: traditional farming will help you gain control of your finances, your food security, and your life. The message is alluring, and respectful.

Farmers who embrace it eventually go even further on their own; besides the Seed Bank set up by the Green Foundation here, the farmers themselves have established two more. They do not trade in seeds; instead they accept that seed diversity provides tremendous insurance against uncertainties. A farmer who borrows one kilogram of seed from here must return two kilograms of seed after the harvest season. Women share the work of record-keeping and accounting in the bank, and also perform the vital function of selecting seed for the next season. "Though our men also support us in all our work, we women are the only seed selectors, sowers and collectors, as we have that special intuitive and sensitive skill. In fact Hombalamma is fondly called Beeja Mathe as she is an expert in seed identification and selection.", says Lakshmamma.

Today Green Foundation has collected nearly 170 varieties of paddy, including 36 dry-land varieties, a few deep water varieties, 12 scented varieties (like Jeerige, Samba, and Basmati), 100 varieties of ragi including 12 wetland varieties, 12 varieties of oil seeds and 14 varieties of minor millets, nearly all of which have been totally neglected over the course of the Green Revolution. These have been carefully selected and segregated, by first germinating them and thereafter asking five experienced farmers to identify each. The foundation puts these seeds to germination tests once every two years and increases the quantity of seeds stored, along with full documentation on their geographical features, history, and their special qualities. These seeds, they know, will be the foundation for the coming years, making sure that hundreds of other Hombalammas find a new prosperity.

Sudha Narasimhachar is a freelance journalist and writer; she is particularly interested in issues relating to the environment, women and children. She has published a collection of short stories for children.