The half-life of justice and common sense

After one round of public scrutiny and an adverse order from the Supreme court, UCIL's plans for uranium mining in Nalgonda seemed to be defeated. But the company now proposes to continue down the same path, apparently unmindful of local opposition or legal strictures. Sunita Dubey reports.
18 April 2005 -

In early March this year, an environmental public hearing (EPH) was held on a proposed uranium milling and processing plant in an area inhabited by Lambada tribe, at Seripally village in Andhra's Nalgonda district. Uranium is a radioactive element used in missiles and nuclear weapons, and its dust is highly carcinogenic. The public hearing was required by law to obtain the clearances necessary for such projects. The inputs of interested groups were to be recorded at the meeting, and a decision made thereafter. But the very fact that this hearing was held showed how badly corrupted the whole process is.

To understand this, roll back the clock about 20 months. In August 2003, the Uranium Corporation of India Limited had held a similar meeting, to obtain clearances for uranium mines at Lambapur-Peddgattu, and a processing plant at Mallapuram. The status of this earlier public hearing and environmental clearances for uranium mining remains in limbo even after one and a half years. So what is different about the recent hearing? The Supreme Court has since ordered that no hazardous industry can be located within 10 kilometres of the drinking water sources for Hyderabad-Secunderabad, the water reservoirs at Gandhipet and Himayatsagar. Since the original site - Mallapuram - did not meet that standard, the UCIL is now proposing to establish the processing plant at Seripally, about 50 kilometers away.

But with clearances for the mining itself uncertain, what would be the point of obtaining clearances for a processing plant? It appears the Government has already taken a decision to go ahead with the uranium mining despite opposition by the local communities and various environmental and social groups. 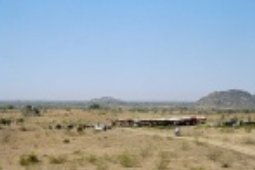 The site chosen for the public hearing was highly inaccessible to the communities that would be affected by the project. (Picture: MAUP)

These concerns raised during the earlier public hearing are still lingering in the air, with no response either from the government or UCIL. Now, UCIL proposes to locate the processing plant farther from the reservoirs, but the mining itself would remain in the area near the water storage. The risk of contamination of the reservoirs, thus, is unchanged. Moreover, the radioactive material mined near the reservoir would have to be transported to the proposed processing plant, posing other risks of leakage along the way. Nor are the many other concerns addressed properly this time too.

How will changing the site of the processing save the water reservoir from being contaminated, when the mining itself will be still done just 1.5 km away form the reservoir?  •  An impacted assessment process
•  Killing them slowly

This uranium mining project was once rejected by the Government in 1996, on the basis of its close proximity to the wildlife sanctuary and its potential impact on flora and fauna. The project also ran into problems when the Andhra Pradesh Pollution Control Board on 28th January 2004 decided "not to consider" the Uranium Corporation of India Limited's proposal to set up uranium mining unit and processing plant at Lambapur/Peddagattu and Mallapuram villages respectively in Nalgonda district. The decision was taken at the meeting of the Consent for Establishment Committee (CFE) constituted by the Andhra government to sort out problems encountered by entrepreneurs setting up industrial units in the state. The CFE Committee decided not to consider the request for consent for UCIL at the proposed site saying that "this is impracticable and goes against the universally accepted precautionary principle."

However, at same time a team consisting of Dr. Rajesh Gopal IGF & Director (Project Tiger) and Prof. Raman Sukumar (Indian Institute of Science in Bangalore) went for a site inspection on the 29th and 30th November, 2003, of Chitrial and Peddagattu areas of the Rajiv Gandhi Wildlife Sanctuary (Nagarjunasagar-Srisailiam Tiger Reserve). And in their presentation to the National Board of Wildlife on 8th January 2004, they proposed diversion of 1000 ha area in Chitral and 1000 ha in Peddagattu for the UCIL project from the wildlife sanctuary area. Their observation was based on the importance they attached to India's nuclear power programme and also the opinion that the proposed exploratory drilling may not cause any significant harm to wildlife and its habitat. The only condition they imposed was that the user agency should deposit Rs. 5 crores for better conservation, even as forest-dependent communities were being forced out of the forest areas in the name of protection.

But this time for uranium project there is no opposition from either the AP Pollution Control Board or the state government. As of date there is no official communication from the government about their response to the public hearing. The Chief Minister, Y S Rajashekhar Reddy of the ruling Congress party, says the state government does not have any stake in the approval, and it is therefore for the Centre (also led by the Congress) to decide. Unofficial sources reveal that the Department of Atomic Energy putting pressure on officials who are speaking against the project. The powers of the government under the Atomic Energy Act of 1964 are enough to go ahead with this project with or without the consent of the local people.

The Movement Against Uranium Project, comprising individual citizens and voluntary organisations, notes that at the end of the public hearing, despite the demand from the speakers and the public to announce the verdict of EPH Panel, the District Collector merely said that the minutes of the proceedings were recorded and that the entire session was video graphed and would be submitted to Pollution Control Board.  •  Summary of March 2005 hearing

The troubling questions are too fundamental to be ignored. Why didn't UCIL engage a more qualified agency to conduct its EIA, based on scientific facts and data from many seasons, even years? How will changing the site of the processing save the water reservoir from being contaminated, when the mining itself will be still done just 1.5 km away form the reservoir? The UCIL's poor track record in Jadugoda has made people more suspicious of their activities.

The question now is whether the Ministry of Environment and Forests, will give its clearance or reject the project on the grounds of environmental safety and stiff opposition from the people. This is an important test for not only the Government but also for the validity of whole EIA and public hearing process. The people of Nalgonda have made it very clear again and again to the government, the UCIL, and others that they will not let their land and forests be contaminated and destroyed by uranium mining. It's just not a question of their well-being, but the risks are also thrust upon future generations. Even if uranium mining is necessary, it has to be asked whether the nation's interest is served by putting approximately six million people in Hyderabad and Secundrabad at risk of a major drinking water contamination, in addition to putting local communities at constant risk of exposure to radiation.