The transformation from consumerism to sustainability depends critically on how we change our culture, scientists and philosophers at an annual forum meeting in Italy agreed. Darryl D'Monte reports.
31 October 2010 -

Environmentalists have paid little heed to the 'softer' aspects of the movement, of which the need to change our culture is one of the most important. At the 8th International Media Forum on the Protection of Nature, organised by Greenaccord in Italy annually and held this time in the mediaeval town of Cuneo earlier this month, the focus was on "People Building the Future: Boundaries and values for a sustainable lifestyle". Speakers included two from the Worldwatch Institute in Washington DC, whose annual State of the World for 2010 is titled: Transforming Cultures: From Consumerism to Sustainability.

The well-known US environmental economist Robert Costanza spoke about "Flourishing within Planetary Boundaries". He stressed the need to have a vision of not how the world worked, but how we would like it to work. He noted how Thomas Freidman, the prolific New York Times columnist who is in Delhi as this goes to press, wondered in a piece titled "The Inflection is Near" in March 2009 whether the depression in the US (a telltale word, if ever there was one) was far greater than merely a matter of economics.

"What if the crisis of 2008 represents something much more fundamental than a deep recession?" Freidman asked. "What if it's telling us that the whole growth model we created over the last 50 years is simply unsustainable economically and ecologically and that 2008 was when we hit the wall - when Mother Nature and the market both said: 'No more'?"

Prof Costanza, who has just shifted to Portland State University, believed this might well be the "incontrovertible lie", punning on the famous Al Gore documentary, which changed Americans' perception of the climate crisis. For many, however, it is business as usual: Time magazine dated November 1 has a cover story by Fareed Zakaria titled "How to Restore the American Dream".

Prof Costanza has launched a journal called Solutions (thesolutionsjournal.org), with the International History of the Future of the Earth or IHOPE, no less. "The best way to predict the future is to create it," he said. Practical problem-solving, he understood, requires the integration of a Vision along with Tools & Analysis appropriate to the vision. His diagram for the safe operating area for humanity has a circle with concentric circles radiating from the small green core, which is the only safe area, given climate change, nitrogen loss (through agriculture and other interventions) and biodiversity loss. 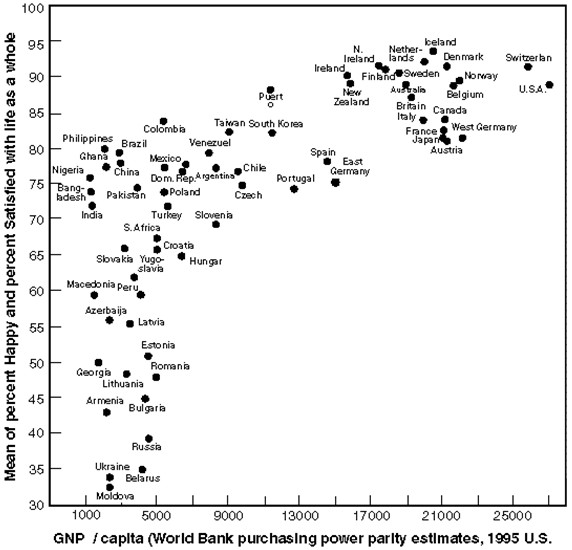 The "Economics of Happiness" recognises that human needs are much broader than material satisfaction. (Click to enlarge image - courtesy: Robert Costanza).

•  Sceptics get it wrong

Mind you, marketers are already incorporating the nemesis of the world in their ads. One for a product called Diesel, shows a scantily-dressed model tantalisingly dripping some drops of water from a bottle into the parted lips of a male sprawled on the ground, in an equal state of undress, atop a submerged skyscraper. A red circle on the left corner reads: "Global-warming ready", with a cynicism that surpasses the notorious Benetton ads of yesteryear, showing AIDS victims dying and equally exploitative images of true-life misery.

But things are changing, even in the US, however slowly. The Alabama Power company had a motto: "Always On", rather like a never-ending party, but its message is now to preach conserving electricity. Prof Costanza had another diagram showing each country with its share of Estimated World Oil Ultimate Recovery, with a confusing acronym EUR, in red, measured against the country's actual remaining stocks in 2000, in black. The US has a ratio of 271 to 62, China 86:40 and India 14:8 (rounded off). His Institute for Sustainable Solutions at his university asks pertinently: "In a full world context, what is 'the economy' and what is it for?"

There is an "Empty World" model of the economy, the Basic Premises of which are:

His field of work is the small but dedicated area of ecological economics; he was in Delhi a couple of years ago to attend the annual meet of the International Society of Ecological Economists (ISEE). In Cuneo, he harped on the basics:

His Integrated Questions or Goals consisted of Ecologically Sustainable Scale, Socially Fair Distribution and Economically Efficient Allocation. This tiny band of brothers (and sisters, though they seem to be in short supply!) employs the following methods: Transdisciplinary Dialogue, Problem (rather than tools) Focus, Integrated Science (balanced synthesis & analysis) and, most innovatively, Effective and adaptive Institutions.

These economists list four categories of capital: Built capital is the infrastructure (buildings, roads, houses, etc.) that make up the material structure of human society; Human capital is the physical bodies of individual humans, their health and education, and the information stored in their brains; Social capital is the web of interpersonal connections, institutional arrangements, rules and norms that facilitate human interactions and Natural capital is the land and the resources it contains, including ecological systems and services.

His interesting graph shows the mean per cent of countries happy and satisfied on the Y axis and GNP per capita on the X axis, measured in World Bank purchasing power parity, 1995 figures. Not surprisingly, Iceland tops the list, closely followed by other Scandinavian countries and Holland, while the US trails below them. India figures about three-quarters of the way from the bottom, with some 71 per cent of the population 'happy', but with a GNP per Indian of just around $1000 (15 years ago). Pakistan is in fact slightly better off in the chart, as well as Bangladesh.

Prof Costanza made a fervent plea for an "Economics of Happiness", a la Bhutan. Human needs were much broader than material satisfaction: there was a subjective element implicit in them. He has toyed with an Index of Sustainable Economic Welfare and a Genuine Progress Index, both more telling yardsticks for measuring the well being of a country. Costa Rica figured well in his analysis as a country which years ago abolished its army and spent the funds on preserving its forest and biodiversity. It has instituted a system of payment for ecosystem services. Thus, if the authorities are erecting a dam, they have to pay for causing such damage and this is used to reforest areas.

Some of these themes were taken forward at Cuneo by Sister Giuliana Galli, who is the Vice President of Compagnia San Paulo, a major foundation dedicated to "furthering society". She cited the need to move from competitiveness to solidarity with the poor of the world. She gave human rights pride of place in primary needs. "Countries went to other countries to protect human rights," she stated, in a thinly-disguised criticism of the US.

Article 15 of the Human Rights Charter clearly laid down that no citizen could be denied the right to citizenship - a right which is honoured more in the breach than observance today in every country, India not being an exception. Article 18 permitted freedom of thought, while Article 23 condemned unemployment. Article 28 gave the community rights of full and free development of one's personality, which is again much abused today everywhere. Her presentation put the economist's more 'scientific' thrust in a more humane perspective.