The replacement of CFCs by more benign HCFCs and HFCs has removed the risks linked to ozone depletion, but these gases continue to contribute to global warming. Darryl D'Monte reports.
22 June 2011 -

Even most environmentalists believe that the Montreal Protocol, which was signed in 1987 and has since been ratified by 196 countries, is a "done deal" in other words, it has accomplished its task in ridding the world of dangerous chemicals known as chlorofluorocarbons (CFCs) which were eating a hole in the ozone layer.

The rising use of CFCs in various industries led to dangerous skin cancers, known as melanoma, especially in southern high-latitude areas. Australia, Chile, Argentina, New Zealand and other nations closer to the Antarctic ice sheet were particularly affected, which strengthened their resolve to fight this environmental hazard. While such cancers are only contracted by white-skinned people (brown-skinned people have higher natural immunity), it is less well known that people working in the open anywhere in the world - typically, farmers - can contract cataract as a consequence of exposure to excessive radiation.

The production and consumption of CFCs, gradually reduced over the years, has now been completely banned as of January 2010. Even developing countries, which were originally given a ten-year grace period to put such restrictions into effect, have now fallen in line. This has saved the world from excessive radiation as a consequence of the widening hole in the ozone layer. There has also been another benefit of reducing CFC use - nearly 135 billion tonnes of carbon dioxide emissions were reduced between 1990 and 2010, delayed the impact of global warming by up to 12 years.

The story of the CFCs, however, is not complete. These were replaced by hydro-chloro-fluoro-carbons (HCFCs) and hydrofluorocarbons (HFCs) as a result of the Montreal Protocol, but it was only later that the realisation dawned that even these alternatives contribute to global warming. While their ozone-destroying potential is far less (HCFCs deplete less ozone than CFCs, and HFCs are completely safe in this regard), their absorption of earth radiation continues to pose a risk to an already warming planet.

At a meeting last month (May 8-12) in Male, the capital of Maldives, the UN Environment Programme and a host of partners organised an industry round-table, which was followed by meetings of the South Asian and West Asian regional ozone networks. Its theme was Greening the future through HCFC phase-out and low carbon development.

In 2007, the Montreal Protocol parties agreed to accelerate the phase out of HCFCs by ten years in both industrialised and developing countries. There will be a freeze in HCFC consumption and use in developing countries by 2013 and a 10 per cent reduction by 2015. The Protocol's Technology and Economics Assessment Panel has noted that for the treaty to reap the benefits of an earlier HCFC phase-out, they have to be replaced by alternative chemicals that have a low global warming potential. At the same time, the energy efficiency of refrigeration and air conditioning equipment has to be improved. 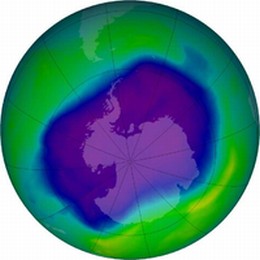 The choice of technologies that developing countries make as they phase out HCFCs will be crucial. The Asia Pacific region is already the largest producer and consumer of HCFCs. (Picture: The ozone hole over Antarctica at its peak in September 2006.)

In developing countries as a whole, refrigerators and air conditioners account for as much as half the electricity consumed, which provides a glimpse of the vital role of these two appliances. At Male, Greenpeace pointed out that HFCs were the fluorocarbon industry's primary replacements for CFCs and HCFCs. There were several emission scenarios for calculating the future global warming contribution of HFCs. These were estimated to contribute between 6 and 45 per cent of total greenhouse gases by 2050. By that deadline, which most countries, including the US, use to set their major emission reduction targets, HFCs are estimated to generate 4 to 8.8 gigatonnes of carbon dioxide.

Since the pace of installation of refrigerators and air conditioners is far greater in developing countries, due to their larger population as well as tropical climate, their HFC consumption is expected to be eight times higher than industrial countries by 2050.

Greenpeace makes a strong case for switching over soonest to substitutes. "There is an emerging international consensus on the fact that HFCs pose a real danger to the climate and are therefore not sustainable," it says. "In other words, they are obsolete. Should developing countries opt for primary transition from HCFCs to HFCs during the next few years, they will be stuck in an HFC cul-de-sac for at least the next four decades. Instead they could opt for natural refrigerants, such as hydrocarbons, ammonia, carbon dioxide and water. These refrigerants are the only low-global warming potential refrigerants currently on the market."

At Male, Proklima, an initiative of the German technical consultancy agency, GIZ (formerly GTZ), cited the problems that developing countries faced in switching over to climate-friendly substitutes. One was simply availability - the shortage of low global warming potential equipment on the market. Another was the lack of incentives, since there was no commercial advantage in making the switch. A third was the shortage of investment, since few were prepared to produce systems, parts, components and refrigerants.

To complicate matters, consultants developing HCFC phase-out management plans were not recommending climate-friendly refrigerants for projects. Besides, the rules regarding the use of such substitutes were too restrictive to allow their use. Finally, there was a general fear of the safety issues.

Inspite of this, GIZ has helped companies in several developing countries which were making the switch-over to hydrocarbons. These included Gree Electrical Appliances, a major Chinese air conditioner manufacturer, which has partly switched over to hydrocarbon refrigerants. In China too, GIZ has initiated a plan in collaboration with industry for low global warming refrigerants like hydrocarbons. This includes development activities, training, standards and codes of practice.

Swaziland has a stand-alone demonstration project of hydrocarbon refrigerant units at a company called Palfridge. These have improved energy efficiency by 40 per cent, thereby lowering the impact on the climate. In South Africa, GIZ has started a "training the trainer" campaign to boost the confidence of technicians and build up safety information. Finally, in Male itself, it has assisted in introducing a large number of hydrocarbon air conditioners on the market, building acceptance and confidence of technicians, suppliers, end-users and exposing the market to new technology options.

A discussion paper distributed at the conferences cites how the industrial house of Godrej, in India, is taking strides to manufacture hydrocarbon refrigerators. It is the only Indian company using hydrocarbons for this product, which was initially perceived as a risky option. It took up allaying consumers' apprehensions as a challenge and espoused green technology as a distinctive element in its marketing strategy. Despite strong competition from foreign brands, it commands 16 per cent of the domestic market for refrigerators.

It has replaced a foaming agent (insulator) which contained CFCs with cyclopentane. As for refrigerant, it is currently using a hydrocarbon blend and moving towards a single hydrocarbon in future. In air conditioners, Godrej is currently using an HCFC, but is evaluating more environment-friendly options. "Over the years," the company says, "we have developed a fair amount of experience in the use and handling of hydrocarbons in refrigerators, hence we are looking at this at this option in air conditioners."

Godrej is registered with the Bureau of Energy Efficiency in Delhi and all its products are labeled for their use of energy. It claims that its products are in the mid to most efficient levels of the national programme for saving energy. It is a recipient of the National Energy Conservation award for the last two years.

The success of efforts to contain global warming now rests on replicating such initiatives, on a massive scale.