My fossil fuels, your land

The BioCarbon Fund promises to plant trees across a swathe of Himachal Pradesh, amidst questions about the environmental value and fairness of the program. Sudhirendar Sharma reports.
13 September 2011 -

Farmers in mountainous Himachal Pradesh will soon crunch atmospheric carbon to rid the Spaniards of their climate woes. Over next two decades, over 839,582 tons of carbon dioxide equivalents are likely to be sequestered in over 4000 hectares of variedly degraded agricultural and forest land in the state. For this act of benevolence, each family in 177 village panchayats will earn between 4000 and 7000 rupees per hectare each year, helping their counterparts in Europe earn elusive carbon credits to sustain their lavish lifestyles.

The creation of carbon sinks through afforestation - part of the World Bank-supported US $75 million Mid-Himalayan Watershed Development Project - is likely to produce a net gain of Rs. 20 crores to the communities of the region in the next 20 years. "[The] fiscal incentive has triggered a renewed interest in protecting the afforested lands," says Kushi Ram in Baddi Village in Kangra district. With little concern about where the money comes from, landowner interest is restricted to the shower of 'green currency' upon his 10-hectare plantation.

However, the transfer of funds between the host country and the client, DNA of Spain, is being brokered by the World Bank, which is a trustee of the BioCarbon Fund. Operative since May 2004, the BioCarbon Fund is a public/private initiative administered by the World Bank that aims to deliver cost-effective emission reductions, while promoting biodiversity conservation and poverty alleviation. According to a project official, the project is helping farmers to act like a producer company - selling carbon credits to potential clients.

Is this the 'green economy' the world has been talking about? Of the many variants of this economy, the forest-based carbon-sequestering model has been positioned as a win-win system that connects the developed with the developing economies. Further, it helps develop 'new institutions' and institutional mechanisms to manage environment and the ecosystem services that accrue from it. Though at its nascent stage, such initiatives will provide the necessary paradigm shift to brace the emerging environmental challenges. 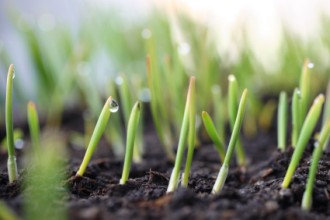 Each tonne of carbon dioxide converted into biomass under new plantations, equivalent to one credit under the programme, is valued at Rs. 240.

It has been argued that this first-of-its-kind project in the mountains will not only generate environmental benefits but will improve the revenue-generating capacity of small farmers as well. Through restoration of highly vulnerable degraded lands in the districts of Kangra and Bilaspur, silviculture activities are expected to generate 343 person-days of employment from each hectare of land as well. No wonder, on the face of it the project seems a win-win strategy for both the government and the communities involved.

And that is how it is being projected as well. It is being hailed as one of the largest carbon revenue projects of its kind, having surpassed the 3500 hectares under the Clean Development Mechanism project in China. The recent agreement between the Government of Himachal Pradesh and the World Bank, in force till December 2018, ensures that the carbon revenue will go the village community, providing them the necessary incentives to protect their watershed and forests. However, 10 per cent of the total carbon revenue will accrue to the Forest Department as overhead charges.

The revenue sharing arrangement may seem an ordinary transaction, but in reality computing carbon savings both in tree biomass above and the soil below is immensely complicated. Each tonne of carbon dioxide converted into biomass under new plantations, equivalent to one credit under the programme, is valued at a modest Rs. 240. The carbon credits from such projects are sold as Certified Emissions Reductions (CER); the villagers get the cash whereas the elusive 'credit' accrues to the buyer, whose carbon emissions are offset by the price he pays to buy the credits.

This carbon trading cycle seems straighforward enough. However, under the provisions of the project, a number of conditions have to be met before the actual carbon revenue starts to flow. The landowners must ensure that the tree density is no less than 1100 plants per hectare; that no felling of trees from the land under the project is permitted; and that no part of the land brought under such plantations shall be diverted for any non-forestry purposes.

Also, given the diversity of land ownership in the region, the net gain at the household level is likely to be truncated on account of differential carbon revenue sharing. Only from the private land will the beneficiary be able to draw 90 per cent of the carbon revenue, from village common land and forest land the prime recipient would be the village panchayat itself, which will distribute the revenue in accordance with the rights and obligations of the relevant user groups. The coverage of private land is limited to 533 hectares; in contrast the forest land being covered under the project is as high as 3177 hectares. The share of common land has been kept at a modest 293 hectares.

Farmers are awaiting the validity of the project by the UN Framework Convention on Climate Change (UNFCCC), when the institutional mechanism for smooth transfer of carbon revenue at the local level would be put to test.

This green story, like every good one, has shades of grey. The first of these relates to the Clean Development Mechanism, a central part of the Kyoto Protocol, which has yet to come clear on its objectives. Does the mechanism not provide developed countries with a cheap alternative to reducing their own greenhouse gas emissions? It is argued that such projects promote cost-effective carbon reductions through 'off-setting' projects located in developing countries, while simultaneously allowing developed countries to continue business-as-usual.

Although CDM projects are in the early stages of their evolution, criticism nonetheless has started piling up against them in most countries. Not without reason - as several projects have only secondary objective of promoting sustainable development in host countries.

While the CDM has created the largest carbon offset market, the CERs have seemingly remained under-priced. Earning a maximum of Rs. 7000 a year from protecting a hectare of afforested land doesn't really seem like a lot, especially if the land is valued for a number of other uses anyway! The project design document has positioned the sale of CERs as a critical incentive to the stakeholders to protect, regenerate and manage the watersheds without drawing comparison with the prevailing and emerging economic scenario in the state. Unless the stakeholders value the carbon revenue mechanism to their competitive advantage, such projects will continue to have limited reach.

Declaring large tracts, an estimated 2.48 million hectares as wasteland in the state is a contested issue - the second grey area. It is a piece of statistics that may promise a huge windfall from replicating the carbon revenue generating project elsewhere. In reality, though, these so-called wastelands have myriad utilities.

The third grey area relates to the community and its practices. How will the village panchayats, who are otherwise lush with development funds, value the limited amount of green currency? Given the fact that a limited area has been brought under CDM which would need to be carefully protected, how will communities outside the project area relate to it? Has the change in social dynamics been factored in to avoid future conflicts? Any intervention of the kind alters the prevailing power dynamics at the grassroots, a crucial aspect for long-term sustainability.

Developing such projects is also a technical challenge, for which expertise from abroad, either directly or as donor support, seems a pre-requisite. That too is a sign of the imbalance inherent in the project. Conceived as an offset mechanism for the rich lifestyles of wealthy nations, carbon trading may reduce developing countries' lands to tradeable spaces, prepared for such trading by the expertise and market mechanisms of developed countries, at prices set by them.

In the quest to be fair to the planet, there has not been much pause to ask if such trades are fair to the communities whose lands are being managed in this way. Until that is proven, the criticism of CDMs is bound to continue.

Sudhirendar Sharma is Director of the Delhi-based Ecological Foundation.