Its demand for water is ever-growing, and its usage wasteful. Using its political and economic power, however, Delhi is quenching its thirst by extracting it from places near and far. Shripad Dharmadhikary reports on the proposed Renuka Dam.
22 July 2009 -

The Renuka Lake in Sirmour district is the largest natural lake in Himachal Pradesh. The State Tourism Development Corporation describes it as a "perfect year-round destination that beckons every traveller ... whose natural beauty has to be seen to be believed." And tourism apart, the lake is quite well known for its religious significance; it is regarded as the embodiment of goddess Renuka, mother of the legendary Parasuram, the sixth of the ten avatars of Lord Vishnu. The lake is said to have been created when Parsauram killed his own mother on the orders of his father, the sage Jamadagni. The religious significance is so important that the place is known as Renukaji.

Lately, however, Renukaji is in the news for an entirely different set of reasons. A large dam planned to be built near the Renuka Lake and temple on the Giri river, a tributary of the Yamuna, threatens to submerge homes, farms and rich forests, as well as a part of the Renuka Wildlife Sanctuary. It will also displace people from 32 villages, without any viable resettlement plans. And understandly, the people of the area are up in arms protesting against the project.

The Renuka dam is planned to be 148 metres high and 430 metres wide, with an installed capacity of 40 MW. However, power generation is a small and 'incidental' component of the proposed project. The main purpose of the project is to store and supply water to New Delhi for meeting its drinking and domestic water requirements. The project will supply 275 million gallons per day (MGD), that is about 1250 million litres per day to the city.

As per an MoU of May 1994 among the Upper Yamuna basin states (Delhi, Rajasthan, Haryana, Uttar Pradesh, Uttrakhand and Himachal Pradesh) Delhi is to get 0.724 billion cubic meter (BCM)of water out of the 11.983 BCM of annual utilizable flow of Yamuna upto Okhla. The 275 MGD to be supplied from the Renuka dam is a part of this share.

Delhi is rapidly becoming a city with virtually insatiable thirst for water. Using its political and economic power, however, it is quenching this thirst by extracting resources from places near and far. The city is already drawing water from the Bhakra dam, it also gets water from the Tehri project and now it is looking to the Renuka dam. Moreover, it expects to draw its remaining share of Yamuna waters from the Kishau and Lakhawar-Vyasi Dams in Uttarakhand. And all of this is accompanied by wide-spread submergence of villages, fields and forests, as well as the displacement of hundreds of thousands of people. 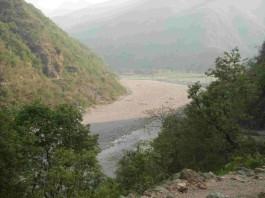 The Renuka dam is being built essentially to compensate for the leaks and losses of a wasteful city. (Above: Dam site).

Delhi has among the highest per-capita water availability of all Indian cities. With a supply of more than 200 litres per capita per day (lpcd), it compares well with Bangalore (74), Chennai (87), Kolkatta (130) and Mumbai (191). In fact, a 2007 study by the Asian Development Bank and the Ministry of Urban Development, Government of India titled 2007 Benchmarking and Data Book of Water Utilities in India looked at the data for 20 major Indian cities and found that the average per capita water availability for these cities was 123.3 lpcd. The 11th Five Year Plan document notes that per-capita availability of water in New Delhi exceeds that in Paris. Of course, these figures hide the gross inequities of water distribution in Delhi.

As if the ecological and human costs were not enough, Delhi uses the water thus obtained rather profligately. When pushing for privatisation of the Delhi Jal Board under its now aborted Delhi Water Supply and Sewerage Project, the World Bank noted that as much as 40 per cent of Delhi's water was lost, mostly due to old and leaking pipes, compared to the international best practise of 10 per cent. Given that Delhi supplies somewhere around 720 MGD of water, the losses work out to 288 MGD, more than what the Renuka project is expected to supply. So the Renuka dam is being built essentially to compensate for the leaks and losses of a wasteful city.

On 6 May 2009, several civil society organisations including the Renuka Bandh Sangarsh Samiti, an organization of the people affected by the Renuka dam, the Himalaya Niti Abhiyan, a coalition of movements, struggles and independent activists in Himachal Pradesh, and the South Asia Network on Dams, Rivers and People, a leading research organisation on the issues of dams and water based in Delhi submitted a memorandum to Prime Minister Manmohan Singh, then also holding charge of the Ministry of Environment and Forests. This memorandum, apart from raising many other issues quoted the Performance Audit report of the Delhi Jal Board for 2008 which also noted that "Delhi has distribution losses of 40 per cent of total water supply which is abnormal and significantly higher than the acceptable norms of 15 per cent prescribed by the Ministry of Urban Development."

The memorandum also noted that the Delhi Jal Board had admitted, in response to an application under the Right to Information Act, that it had not carried out any options assessment before concluding that the Renuka project is the best to meet its water requirements.

The Environmental Appraisal Committee of the Ministry of Environment and Forests, which is considering the project developer's proposal for Environmental Clearance, decided in its meeting of 14 May 2009 that the representations made in the memorandum must first be addressed, and only then can the project be considered. This means that as of now, the project does not have the necessary environmental clearance to go forward.

No clearance, but land acquisition On

In a major travesty of justice, however, the project has taken up acquisition of lands even though it still does not have the statutory clearances. Not only that, but the land acquisition is being carried out under the Sec 17 of the Land Acquisition Act, the so called 'urgency' clause, which also means that the right of the land owner to raise objections to the acquisition process is bypassed.

This has justifiably made the people in the area furious. For some time, people from the 32 villages affected by the project have been raising the issues of displacement, resettlement and compensation. At first, they believed the promises of the project authorities that they would get the best possible resettlement and compensation. Then they found that there was no land-for-land provision, but only cash compensation for their losses. Their final disillusionment came when they heard the rates being offered. While the going rates elsewhere in Sirmour district were between Rs.8 to 12 lakhs per bigha, they were offered a paltry Rs.50,000 to 1,50,000 per bhigha. This meant that they would be in no position to buy land to replace the lands they would lose. Like in many other projects in the country, this is a sure recipe for rendering them landless, and pushing them into poverty. 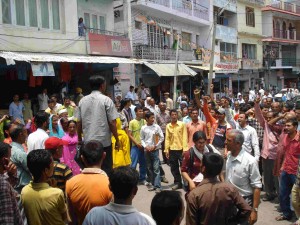 The representatives of the oustees told this author that when some of them met the Chief Minister of the state, he said that if they opposed the Renuka project, then he would stop the development of the entire area.

Total opposition to the project

The oustees of the Renuka dam have now decided to completely oppose the project. Apart from the resettlement-related issues, they have also started questioning the very basis of the project. They argue that if Delhi wants to use the waters of the Giri river, there is no need for the dam; the same water in any case flows into the Yamuna and then onwards to Delhi.

On 25 June 2009, they held a big rally and public meeting in Dadahu, the main town near Renukaji. The event was attended not only by men and women from the affected areas, but also activists from other parts of the state and the country. The local MLA, Dr. Prem Singh of the Congress, (the BJP is the ruling party in the state) who is himself affected by the project, participated and declared his support to the people. The gathered protestors also went to the project office and declared their total opposition to the project. The leaders of the Renuka Bandh Jan Sangharsh Samiti - which is spearheading the struggle - emphatically and repeatedly stated that the issue is no longer about resettlement, but rather the question of whether the project itself is unnecessary.

The anger, distrust and opposition in the dam-affected areas are attracting widespread support not just from other parts of Himachal Pradesh but also elsewhere in the country. The real question is whether Delhi will learn anything from it. Not only is the project from a bygone era - it was first mooted in the 1960s - but the methods of implementing it are also outdated. An all-powerful government has decided what is best for the people, without their consultation or involvement, and pushes ahead its 'public interest' projects using force if felt necessary. And as in countless other examples throughout India, the people are prepared to resist, knowing quite well how poorly the state has treated others facing similar fates.