The message from voters in 2014

Combining provisional voter turnout data and the perceptions of MP performance based on the Daksh-ADR survey, Srinivasan Ramani attempts to make reasonable assessments about what could be behind high turnouts in this Lok Sabha elections.
14 May 2014 -

Kishen (name changed) is a driver for a TV news channel in New Delhi and stays in one of Delhi's jhuggis. He is a migrant from Bihar who tells me that he appreciates what the Nitish Kumar-led JD(U) has done for his state and for his Dalit community. He suggests that his relatives in Bihar might not vote for Nitish Kumar's party in the Lok Sabha elections but might heed the party's call to defeat the Bharatiya Janata Party. They would choose a party to vote for appropriately in that regard.

Kishen himself has voted for the Aam Aadmi Party in Delhi, upset and angry with the state of the economy - the price rise, the struggle with living standards and his inability to move away from the "filthy" conditions of the slum where he stays.

Shekhar (name changed) is a retired insurance agent in his late 60s and lives in Vellore, Tamil Nadu. He was a supporter of the Gandhian Congress in his youth, but had his political opinion shaped and changed by the Emergency and became a long time Janata sympathiser. Since the collapse of "Janata politics," he has moved on to support the BJP despite the obvious contradictions with his earlier convictions.

Shekhar thinks that there is no scope and use for the politics and the economics of the 1970s any more, and there is a need for a strong leader who would give full effort to tap the vibrancy of India's youth and lead us to prosperity. But is he going to vote for the BJP led front in Tamil Nadu? He says, no.

He will vote for the AIADMK, the party currently in power in the state. He expects the party to support the BJP after the elections and has declined to vote for the BJP-led front, as he feels that the alliance partners of the BJP are far removed from his principles. Moreover, he isnt' happy with the local BJP candidate.

The two anecdotes I quote suggest the complexity of decision-making and voting by the many people who are swayed by anti-incumbency but who are not necessarily loyalists of any particular political party in the country. Voter choice for them is refracted through various considerations - candidate choice at the seat level, party-choice based on performance of the said party at the state level or even at the national level.

It is, therefore, difficult to derive a simplistic and clear political message from the very act of voting - even if it is in high numbers. But based on data and anecdotes, one can say for sure that there is something about a high level of voting and peoples' perceptions of the incumbent (at the different levels - seat, state and centre).

By any estimate, this election has seen a bump in voter turnout across the nation barring very few constituencies. It is, of course, a tribute to the efficacy and diligence of the Election Commission and its outreach programme that people have participated more and more in the past few years to reaffirm India's status as the world's largest electoral democracy. 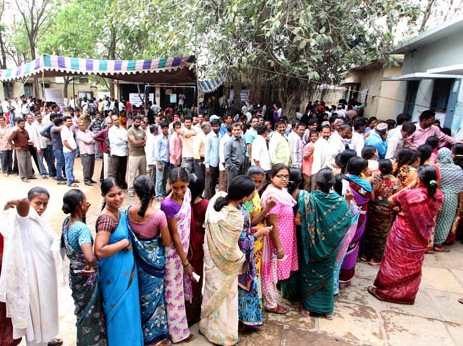 Voters standing in a queue to cast their votes at a polling booth in Vijayawada, Andhra Pradesh in May 2014. Pic courtesy: pib.nic.in

If one looks at the past (as I do in this article), one can certainly say that high turnouts did indeed correlate with some kind of a political message from the electorate when looked at in hindsight. The two highest turnouts in the Lok Sabha elections happened in 1984 and in 1998. During the former, voters sharply voted for the Congress in large masses sympathising with the party's loss of its long-time leader Mrs Indira Gandhi.

In 1998, voters were sending a message that they were perhaps tired with instability in government - three governments had come to power within two years between 1996 and 1998 - and voted for an alliance that promised best to retain power in a stable manner.

So what political messages are the people sending through the high voter turnouts this election? Is it, as is loudly being posited by the BJP, a pro-Narendra Modi wave or is it just an anti-incumbency wave against a government that had endured for 10 years? Or is it a variegated message that is a cumulative sum of political opinions at the state level?

Let us take a look at the ADR-Daksh survey that tabulates the public perception of MP performance in order to see if there is a correlation between turnout at the constituency level and voters understanding of MP performance.

The following GIS map shows the increase in turnout between 2009 and 2014 across states for seats for which elections were held till phase 9 (and provisional constituency data has been made available by the Election Commission).

Legend for Turnout Increase in %
As can be seen from the map, there have been a few states which had much lower turnouts in 2009 and has seen huge increases, while there are others (Bengal, Kerala, Tamil Nadu) which already had saturated turnouts in 2009 and didnt see much of a bump this time around.

Here's another way to see the point about saturation in voter turnouts. As the visualization below shows, for states that had a very high turnout in 2009, the increases in turnout were relatively less in 2014.

The question is to now understand the story behind these increases (only Sikkim has seen a decrease since 2009) in turnout across states. Here's where the ADR-Daksh survey on MP performance, based on a number of issues, comes to bear upon the data at hand.

The following graph shows correlations calculated for MP Performance (as determined in the survey data) and the above mentioned turnout information for each constituency.

The graph can be read in this manner: if the correlations are negative, it means that higher turnouts correspond to a lower rating for MP performance, if the correlations are positive, higher turnouts correspond to higher rating for MP performance. Thus as shown in the graph above, in most states, there is an anti-incumbency that has driven higher voter turnout.

Whether this anti-incumbency/pro-incumbency is at seat, or state or central level is difficult to say from the data, but as the graph shows, the thesis that increase in voter turnout has a state-by-state story behind it is somewhat vindicated.

One can make guesstimates about which parties would benefit the most from the increase in turnouts. For example, in the UT of Delhi, most MPs were from the Congress party in 2009, the state government till very recently was headed by the Congress party, which was also in power at the centre. The high negative correlation between increase in voter turnout and MP performance here could indicate that there is certainly an anti-incumbency factor working against the Congress party.

On the other hand, in Gujarat, the state government has been led by the BJP, which was narrowly ahead of the Congress (15 vs 11 seats) in the seat tally in 2009. A relatively lower degree of negative correlation between turnout and MP performance could indicate that voters are not necessarily voting against the incumbent. Probably only one of the two parties is expected to do badly and it is easy to guess that the BJP will benefit. This is similar to Rajasthan and Maharashtra as well.

In Karnataka on the other hand, the BJP had done relatively better in 2009 than the other parties and had secured most Lok Sabha seats in the state. One could possibly say that the weak negative correlation between high turnout and MP performance indicates that the BJP's prospects this time around will be less promising in the state.

The results for Kerala, Tamil Nadu and West Bengal can be ignored, as increases in turnout are too low (as turnout was already saturated) and it is difficult to make any assessment based on the figures.

To sum it up, combining the data on MP performance and turnout information available helps us to make a reasonable assessment of the political message given by the voters. Such assessment, as above, shows that there is definitely an undercurrent of anti-incumbency at the national level across the states, but who is going to derive benefits from it is an issue that will be determined by political variables in each individual state.