What's 'inclusive' about the Budget?

The government's understanding of an 'inclusive' Budget is simply that it ought to be the provider of welfare for the lower income groups. The evidence so far suggests that this is an attempt doomed from the start, since the government is not very good at administering such programmes. Ashwin Mahesh says that there are better options.
28 March 2007 -

An oft-repeated description about the most recent Central Budget is that it aims to be 'more inclusive'. This description is offered against the backdrop of rising inflation, and the increasing unaffordability of several basic goods for the working poor. Thus, it is said that the Finance Minister must understandably go slow on the reforms he would rather deliver, and instead pause to take disadvantaged sections too along in India's journey of growth. This would be a laudable goal, if there were any truth to it. But in fact, this year's Budget, or any other for that matter, is never about the exclusiveness or inclusiveness of the growth story.

There are two flaws in trying to understand the Budget on these terms. First, nobody in this government has accepted that the story so far has been exclusive. Indeed, every move of the Finance and Commerce ministries is always presented to the public in very inclusive terms. There is not a single piece of legislation, or an executive decision that the Prime Minister or his Cabinet members will point to and say, "we recognise this is really only for the rich". Instead, even if some moves are really only for the already well-off, such as the slew of exemptions packaged into the SEZs, it is always presented as somehow necessary to ensure the welfare of a much larger set - typically through trickle-down economics in the form of spending by the rich, indirect jobs created, and so on.

This view is tightly coupled to another economic position widely adopted - namely, that direct expenditure by the government is not the most efficient driver of economic growth. Instead, we are told, it is the private enterprise of businesses, unshackled from the handcuffs government has so far put on them, that will create the fastest growth and opportunities for the most number of people. As a result, the very word 'reforms' has now come to mean a lessening of regulation and government control, and a more enabling environment for private enterprise. It is hoped that in turn, the new opportunities for the upper income groups will lead to eventual gains for the rest too.

That explains why this Budget is labelled 'inclusive'. What it means is that past faith in trickle-down gains is now quickly disavowed, and instead the government will itself deliver welfare to the working poor and lower middle classes. The various forms of expenditure and tax waivers for wealth creators will continue, but alongside there will now be greater expenditure of the government's direct delivery of economic and social benefit to the weaker sections. The FM tried repackaging this about-turn as generosity -- reasoning that because there are now more resources (tax funds) from growth, he is able to allocate more funds for welfare and entitlements - but that is too easy to spot. Entitlements are supposed to be funded, not just when there's more money. Moreover, what happens if there's less money in the treasury tomorrow? Will the FM then decide 'inclusion' is out? 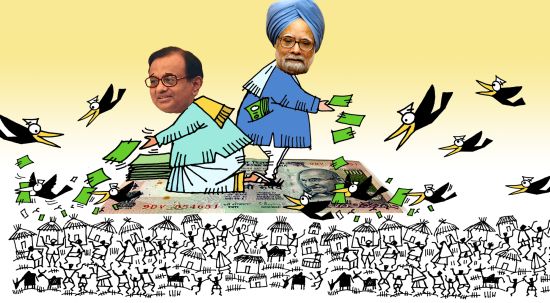 All of this could benefit from some economic theory. Any theory. There is virtually no evidence that in India, government is a better deliverer of economic benefits to the poor. In fact, the modern history of India is a repudiation of this possibility - Indian governments of all stripes have been uniformly poor in uplifting the poor and the socially disadvantaged. And in the process of trying to do this, the governments have only ensured that they too slide into an abyss of incompetence.

Where does that leave us? If the government's understanding of 'inclusive' is simply that it ought to spend more for the welfare of the lower income groups, but this is nonetheless (based on the evidence so far) an attempt doomed from the start, what options remain? The answer lies in first understanding what is truly enabling to the 'already included': good education, affordable access to credit, and most importantly, choice. The first two have been attempted in various forms in the past, and are a feature of this Budget too, but the method is replete with the same old silliness that derailed all previous attempts. And the third - choice - has never been tried yet.

Like all self-appointed guardians of the public good, Indian governments have imagined that they alone can provide public goods and services fairly. Clothing themselves in some delusional holiness, they are confident that only the state can guard the interests of weaker sections, and that any provision of such goods and services by private parties will be ruinous. There is some truth to half of that view. Private players have done a poor job in many areas, including in many public-private partnerships, and simply looted the public treasuries in most cases. But their failures do not exonerate the governments that have themselves failed to assure a meaningful standard of welfare to the majority. The state is right to believe that it cannot disregard its obligation to protect the social and economic interests of the poor from rapacious tendencies among private providers, but at the same time, it cannot continue to delude itself that it is capable of providing the same services quickly or efficiently.

The twin failures should point to a solution that help the poor break free of both paradigms. One that is worth examining, is whether the state must prioritise provisioning public goods and services over providing them itself. If so, then money must follow the patient in the health care system, education vouchers for poor children must enable access to private schools of parents' choice at public expense, food subsidies must be delivered through widely redeemable coupons rather than be claimed by right at state-run facilities, and so on.

Hundreds of millions of poor people are already choosing private providers of these services at their own cost anyway, because the government's delivery of the same services is woefully inadequate. Provisioning these to be delivered privately, but with public financing, need not be a permanent solution, and governments that believe in delivering public goods themselves can certainly take this up with greater commitment in the coming years. But the awful truth today is that at current rates of providing education, for example, it will take 45 years to put the last child in school, and universal health will take even longer. This snail's-pace addition of state infrastructure for public goods means that two whole generations will be cast to the winds. If there's even half a chance that private delivery of state-provisioned goods can speed up that process, we must try that alternative.

The real value in prioritising provisioning over providing services is that it facilitates that ultimate driver of change - choice. Additionally, a helpful differentiation among various parties claiming to be 'pro-poor' would result from such new directions. State provisioning of services delivered by private entities would challenge Left parties to argue their positions based on the quality and efficacy of outcomes, rather than on ideological grounds alone. And even the poor might expect more of them - in the inner cities of America, for instance, it was repeatedly observed that while the liberal elite argued endlessly about school vouchers, poor parents were generally in favour of voucher programs. The acid test of citizen approval does progressive thinking some much-needed real-world good.

It is worth examining whether the state must prioritise provisioning public goods and services over providing them itself.

•  Change within government
•  Leadership by non-believers

Really, what I've hoped for each year is a more 'exclusive' budget, which recognises that each citizen is an independent and autonomous agent of change in his own life, and facilitates his aspirations by provisioning a greater spread of choices. Expanding citizens' economic autonomy should be the top priority of the Budget. Indirect subsidies - such as the Rs.20,000 crore give-away to the fertiliser makers, or the revenue foregone in the name of exemptions, are mostly just largesse for a few, and achieve no significant economic gain for the nation as a whole. The irony is that a truly market-oriented economic leadership would have instantly seized upon the need to expand individual choice, and argued this case endlessly.

Instead, what we find is an apparent lack of confidence in its self-professed views on economic change, and a comfortable coziness with the gravy train that politicians feed off. This has resulted in endless rounds of gibberish about 'inclusive' budgets and reforms with a 'human face'. Meanwhile, the intended beneficiaries are included only in the mass disregard that all parties have developed for them.