Influencing public policy and implementation is a long grind, but with a portfolio of ideas in hand, Nandan Nilekani has coursed the meeting rooms of state and central governments for years. Ashwin Mahesh reviews his first book.
Also see: Interview with Nandan Nilekani.
25 December 2008 -

"I have a portfolio of ideas at any given time, and if some of them are going slower at one point than others, that's fine. I move on to other things, and wait for the right time to come back to what I've left behind," Nandan Nilekani says in response to my first question about his new book, Imagining India. My question is quite blunt: Given the number of different decision-makers he must meet often, and the number of those who've surely listened to his ideas, does he feel let down by them? Have people like Montek Ahluwalia or Sam Pitroda, who appear so often in his book been asleep at the wheel of ideas?

He doesn't believe so. "Quite a lot has been done, if you think about it," he says. "The stock market, voting, a more open environment for entrepreneurship .... no, I don't agree that nothing much has changed." But he agrees there is much more. "Look, everyone knows what more needs to be done, and obviously that's why I have written the book. The second half of the book is all about the execution challenge of getting those things done".

Getting things done. That has been his line, throughout his public life in the last ten years. And Imagining India is nothing if not a book of 'actionable views' - on demography, the English language, employment, universities, urbanisation and much more. T N Ninan, writing in the Business Standard, counted seventeen of them within the book, although he added that most of the 'ideas' in the book were in fact 'issues', with no clear indication of a distinctive Nilekani position on any of them. Nandan is quick to brush aside the labels, both mine and Ninan's - "call them what you like" - for he himself sees his work as a manifesto, and that must surely mean there is a lot to be done.

Public policy in India has reduced to a contest of persons as well as ideas, and is likely to remain that way for the foreseeable future.

•  The ideas of the Indians

And Nilekani is nothing if not a fan of action. In recent years he has narrowed the gap between his advocacy of particular goals and the pursuit of those goals - e.g. strengthening urban governance; developing a blueprint for higher education - using his own resources, role-play and influence. India finds itself with a unique opportunity, he believes, but there is also a lot we must do to seize it now. He himself is busy with this, his portfolio ever-expanding. The book itself, one might see, is the advocacy for that portfolio - a public exhortation and appeal that certain actionable views should be acted upon swiftly.

There are those who argue that such pursuit of public objectives is no task for businessmen, because their financial interests invariably get in the way. It is also reasoned that business acumen and success are not necessarily evidence of skill at building public goods. The Tatas have followed this line, funding the charitable work of many others while themselves remaining physically apart, for the most part. But Nandan - and his wife Rohini - clearly doesn't buy this; he has personally thrown himself into specific initiatives around his views. He once described this to me as a 'confluence' of interest, rather than a conflict, putting his money and other interests where his mouth is. It is clear he still sees it that way.

In any event, that is the nature of the beast today. Public policy in India has reduced to a contest of persons as well as ideas, and is likely to remain that way for the foreseeable future. Rather than lose sleep over this, we may instead better spend our time asking and answering a different question, which Dr Jayaprakash Narayan of Lok Satta is fond of repeating - "if the problems are political in origin, can the solutions be techno-managerial?" I'd like to be a fly on the wall while Nandan and JP talk.

Given the importance of 'actionable' to so much of what is discussed in the book, it is strange to see it contains so little of his work with eGovernments Foundation, the non-profit he established with Srikanth Nadhamuni (see here and here). When I ask him about it, he says, "urban government is only one of the things I'm doing", as if to suggest that if one part of his portfolio has received less attention, then another has in its place.

It is easy to understand what he means, but it is at eGovernments Foundation that the actions around his views have had the longest run - as teams have worked for years to develop technology for public administration, especially municipalities. In many cases, through some rather painstaking work, eGov - as it is known to insiders - have got bureaucrats to embrace its accounting software and other products (Nandan has overlooked the failure of many cities to pay for the use of this software.) The work at eGov has been often frustrating, but Nandan and the others have pushed on, determined to introduce efficiency and accountability through technology in public administration.

Egov is also in stark contrast with Nilekani's work for the National Knowledge Commission, which has underperformed. It is with good reason that the chairman of the NKC, Sam Pitroda is better known for his work from Rajiv Gandhi's time than his last 4 years at the helm of the commission. Both before and after Pratap Mehta and Andre Beteille left in a huff, accusing the commission of foregoing debate in developing policy (See here. Publicly, Nandan remained largely silent, but their exits must have pained him too), a lot of splendid writing came out of the NKC. But so far, there is no evidence that anyone in government, including the Prime Minister who established it intends to listen.

Indeed, the two threads of Nilekani's work with the commission that find lengthy mention in the book - ICT and higher education - have received the worst treatment from the government. The National Egovernment Strategy paper that Nilekani submitted to the NKC was watered down (I'm being polite in describing what happened to it) until his imprint was fairly gone. Predictably, it has led nowhere. And the commission's eminently sensible views on higher education are quickly degenerating into a 'grand design' of the kind that is all too familiar in India - more Central Universities, IITs and IIMs, and a slew of 'world class' universities devoid of purpose, focus or design. 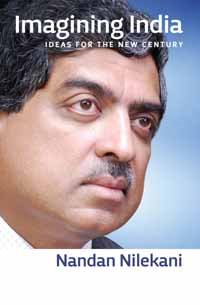 Imagining India is published by Allen Lane, and imprint of Penguin Books, and is available in stores. An international edition is likey to be available in March 2009. The author is fostering a discussing of the ideas in the book at imaginingindia.com.

One cannot escape the conclusion that the many leaders in government and elsewhere who have heard him have been astoundingly deaf to his call, possibly out of political calculation. And while Nandan is charitably positive in all mention of the dozens of people he has quoted in the book, many of them - especially the politicians - have question marks around them.

Throughout the book, I sensed shades of Ramachandra Guha, whose influence Nandan acknowledges. But without the interesting anecdotes that a historian has plenty of to call upon, the narrative isn't as compelling. The background material leading up to many views can only be described as a marketing decision, to speak to unfamiliar readers, especially those outside India. But informed readers will find it un-necessarily expansive, inexplicable coming from one who is supremely skilled at listening to an hour and a half of argument, and then putting his finger on the three sentences that really mattered.

And the editors should have seen early on that packing 17-or-so views into a single book does not permit significant examination of any of them, except where - as with ICT - Nandan's own experience and insight is exceptional. Quite simply, there isn't enough of Nandan himself in this book - indeed, long passages in it could easily have been written by Gurcharan Das or Shashi Tharoor without reading too different.

Nandan is gracious in acknowledging the editors' contributions to his work, but this may simply be routine. It is certainly not deserved. The editors at Penguin appear to have treated the book as an English language project, their care limited to ensuring the clarity of the text. But editing is - and should be - about selecting the right material too, ensuring in the process that the distinctive contributions of an author are brought to the fore, while the rest is given lesser importance. That hasn't happened.

Ashwin Mahesh is a co-founder and editor at India Together. (Full Disclosure: During 2005-6, he worked briefly at Egovernments Foundation, which was co-founded and is funded by Nandan Nilekani).