: Large-scale unemployment in the rural areas and mass migration (of the rural population) to urban centers are related. Rural poverty is inevitable when landless labourers and subsistence farmers are at the mercy of feudal overlords, the elements, and seasonal agricultural work for their livelihood. With drought and starvation staring at him the poor villager migrates to take a job in the city, but even here his position is often at risk of being replaced by mechanization, global changes, and other forces beyond his control. 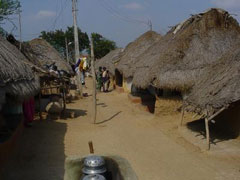 Public policy, particularly in response to globalization and the dictates of international loans, woos and seduces capital to come ashore, making available water, power, services, and roads for an investor class. Large dams are built, hydroelectric and nuclear plants are commissioned, regulations are slackened, and roads are widened - roads that will eventually carry goods from the factory to the nearest port for export, completely bypassing millions of poor along the way who might themselves benefit from similar products. The nation's balance of payment looks better; the GDP is improved. The benefits flow to a very small percentage of the population - the urban and the schooled. But the evil pair - rural poverty and urban squalor - lingers.

Development from top down appears to have failed the vast majority of India. Murthy Sudhakar believes it is time to try a different approach - from the bottom up, beginning with the poorest and weakest sectors of society. According to Sudhakar, to reverse these trends and stem rural migration, the historical neglect of the villages must stop, and life for the rural population must be made both physically and economically secure.

To take up this challenge, he launched infraSys, a self-sustaining for-profit company with a non-profit attitude to operate as a socially responsible business. The business itself must be socially responsible, insists Sudhakar, not just the conduct of business. The company's mission is simple. Provide several kinds of 'infrastructure' that can help people help themselves.

Rather than as an NGO or a charitable organization, Sudhakar has established infraSys as a self-sustaining business, which will reinvest its entire net profits and equity back into the business. His vision is that infraSys will raise and invest "seed" capital to generate seeds (profits). Both the seeds and the capital can then be sown again and again. The profit motive, he believes, is important to create viable ventures; without this they may thrive for a while on external support, but not generate any strength of their own. To reinforce such strength both ownership and management must also be local. He is convinced that the best approach for villagers is to see themselves as producers and consumers and then supply to themselves what they need rather than depend on the outside.

In the year since its founding in March of 2003, the focus of its investment has been vermicomposting - the conversion of organic wastes and cattle manure to compost with the help of the earthworm. Ten landless and marginal farmers in a few villages in Mysore District of Karnataka, India, are now operating these units and are generating incomes for themselves. A few more are being planned in the adjacent Chamrajnagar District also. The investment for this will likely come from the first ten who have started to repay infraSys - thus triggering the intended regenerative cycle.

A Self Help Group has purchased pedal pumps for small scale horticultural crop cultivation with investment from infraSys.

infraSys has also invested in a street lighting project in Tamilnadu. With a matching grant from the Government of Tamilnadu, a hamlet of 50 families will have solar street lights, freeing the panchayat from recurring electricity bills. They are expected to be installed in 2004.

Encouraged, early this year Sudhakar undertook a six-week trip through India to explore villages looking for opportunities for projects to do. From Maharashtra to Karnataka and through Tamilnadu, he traveled and met many people with whom, he hopes, infraSys can do 'business' for the benefit of the villagers and villages.