There are 250,000 people languishing in jails waiting for the courts to hear their cases. But far from facilitating the release of those who have been detained for years, the amendment to the Criminal Procedure Act is a reversal of many Supreme Court decisions, writes Colin Gonsalves.
12 August 2007 -

The Code of Criminal Procedure (Amendment) Act, 2005 has been welcomed in the national media as heralding the release of 50,000 undertrials many of whom have been languishing in jails for years without their trials even beginning. Nothing could be farther from the truth. The amendment is, in fact, a reversal of the Supreme Court decisions from 1996 onwards in the Common Cause and the Raj Deo Sharma cases.

In the Common Cause cases in 1996, the Supreme Court found that in many cases where the persons were accused of minor offences, proceedings were kept pending for years. The poor languished in jail for long periods because there was no one to bail them out. The criminal justice system operated as an engine of "oppression". The Supreme Court then directed that, depending on the seriousness of the alleged crime, those in jail for a period of six months to one year would be released either on bail or personal bond, provided their trials were pending for one to two years.

The Supreme Court then issued directions for the closure of cases and the discharge of the accused. Cases where trials had not commenced for specific periods of time were to be closed. Cases relating to corruption, smuggling, terrorism and the like were exempted. It was clarified that the accused would not be permitted to deliberately delay the criminal proceedings and then take advantage of the time limits fixed. 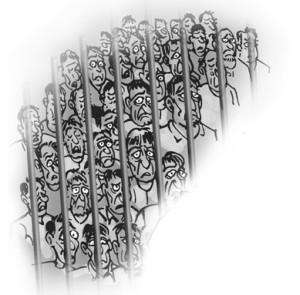 In the Raj Deo Sharma cases in 1998 the Supreme Court referred to its 1980 decision in the Hussainara Khatoon case where the Supreme Court held that "financial constraints and priorities in expenditure would not enable the government to avoid its duty to ensure speedy trial to the accused". The Court thereafter proceeded to issue guidelines for the closure of prosecution evidence and the release of the accused on bail after a certain period of time. It was clarified that "no trial could be allowed to prolong indefinitely due to the lethargy of the prosecuting agency".

Despite these directions given by the Supreme Court ten years ago, the criminal courts failed to release persons on bail and close trials.

The law was reviewed by a Constitutional Bench of the Supreme Court in P Ramachandra Rao's case in 2004 where the directions relating to the closure of cases and the fixing of time limits for trials were set aside saying that it was "neither advisable nor practicable" to do so. As a result, the rot in the criminal justice system deepened and from time to time pathetic stories emerged in the national media on undertrials languishing in jails for decades, but nothing was done.

The present criminal amendment is a reversal of the guidelines laid down in the Common Cause and the Raj Deo Sharma cases, first of all because they do not lay down any time limit for a criminal trial to end. Secondly, whereas in the earlier decision an accused was entitled to be released on bail or personal bond after being in jail for six months to a year depending upon the seriousness of the crime alleged, now that has been enhanced to half the period of possible incarceration i.e. one-and-a-half to three-and-a-half years. If under the earlier decisions of the Supreme Court undertrials were not released there is no reason for us to believe that under a more stringent regime, justice will be done.

The overwhelming majority of those incarcerated are poor, Dalits, Adivasis and Muslims. That the system operates harshly against these sections is an understatement. It operates only against these people.

There are over 250,000 undertrials languishing in jails even though the law presumes them innocent unless convicted. In many cases despite years going by the trials have not begun. Seven out of every ten persons in jail are in this situation. Overcrowding in jails is routine, in some jails as high as 300 percent. Inmates sleep in shifts. Possibly no country in the democratic world keeps its people behind bars in the manner India does. The overwhelming majority of those incarcerated are poor, Dalits, Adivasis and Muslims. That the system operates harshly against these sections is an understatement. It operates only against these people.

The reluctance of the State to clear the jails of the poor is more by design rather than accident. The arbitrary powers to keep a person confined without a guilty verdict is necessary for a State and its police that rules by terror. The Criminal justice system is not really interested in the determination of truth ensconced in the final verdict, rather it is a massive arbitrary system of preventive detention where the ultimate verdict is of no concern as long as the accused picked up by the police languish many years in jail prior to acquittal. Those who criticise the State for the low rate of conviction miss this point; that conviction was never the intention of the police in the first place. This accounts for the sloppy state of forensic investigation and the reliance placed on the lathi over the law.

The other changes brought about by the criminal amendment are also equally vague or dangerous. The amendment in 50-A of the CrPC introduces the Supreme Court's guidelines in DK Basu's case but leaves out the crucial element of giving notice to the family of the person being arrested in writing. This was important because the police routinely lie about giving notice verbally. The amendment to Section 53 is positively dangerous because it seeks to introduce in a sly manner lie detector and narco-analysis tests as admissible in evidence.

In most democratic countries these tests are deemed to be of dubious merit and are not admissible. The amendment to Section 122 seeks to strengthen police power in chapter cases by incarcerating people purely on the basis of suspicion. As the law stands today such persons are to be released on them signing a bond for good behaviour. Now the magistrate will be empowered to ask for sureties which is complicated and difficult for the accused to obtain.

Thousands of poor people are languishing in jail under this Section. Section 291-A is designed to prevent the magistrate who supervises the test identification parade, the cornerstone of a criminal trial, from being summoned to give evidence in court. These are the negative changes sought to be introduced by the criminal amendment. A better way out for the State is to declare an amnesty and to clear the jails of 100,000 poor prisoners on Independence Day.

This article is reproduced from Volume 6, Issue 4 of Combat Law, through Space Share, our collaborative program for other publishers. The entire set of articles in this issue can be found on this page.