Restored from the ruins

A South Marathwada village reconstructs itself after the devastating earthquake, with help from Jnana Prabodhini. Sayli Udas reports.
01 February 2003 -

The intensity of the 1993 earthquake of South Marathwada was such that the whole of Maharashtra shook. Hundreds of villages small and big were totally ruined and people killed in large numbers. Harali, a village located 30 kms from Umarga and 25 kms interior from the Solapur-Hyderabad road was also a victim of the quake. A drought prone area, with fallen stone houses, a high death toll, and with all basic needs wiped out, had no hope of fortification. But as it is rightly said, Hope is a waking dream; the people of Harali did not lose hope.

And Jnana Prabodhini came to their timely aid. Jnana Prabodhini, a non-political organization in Solapur, aims at an alround development of physical, mental, intellectual and spiritual qualities of all people, and of the gifted in particular. This development should lead to leadership, motivation building, attitude forming, understanding problems of India, and preparation for solving some of these problems as the children grow up.

It was the September of 1993 when Anna Tamhankar of Jnana Prabodhini met Ratnaji Suryavanshi and decieded to adopt the village that was not being taken up by the government for rehabilitation. Restoring faith and strength in the minds of the broken 1200 houses in the village was challenging. But Jnana Prabodhini took this up nonetheless, and decided to help build a residential school giving basic education, which would indirectly uplift the entire village. Study and work would be integrated into the curriculum, making villagers realise their potential, and more importantly, help them stand on their own feet again.

The plan was chalked out quickly - but nothing happens without financial support. Other than the villagers of Harali, who contributed their bit, trustees and students of Jnana Prabodhini stood by Anna for the project. A huge sum of 40 lakhs came in from ex-students of the institute settled in Europe and America. Another major contribution of around 40 lakhs came in from the government of Japan after the Japan Consul-General visited Harali. A forty-acre tract of land was available, 8 acres for the school building, 21 acres for growing fruits and vegetables and the rest for other village development. In 1995 the government gave permission for the school to impart education to students from class I to X on a non-grant basis. There has been no looking back.

Anna Tamhankar and other workers of Jnana Prabodhini stay in Harali and look after the management and administration of the school and village. A seven-kilometer pipeline has been laid from Makani to Harali because of the lack of water in the area for farming and basic water-needs. The project has special guidance and counseling from famous scientist Vasantrao Govarikar and agriculture expert Vishwasrao Kachre. About 130 students from 1012 villages in and around Harali have taken the benefit of this residential school and 400 boys and girls are attending the regular school. The SSC batch of 2001 showed a 57% result in the 2001, thus standing amongst the first three schools in Osmanabad district. 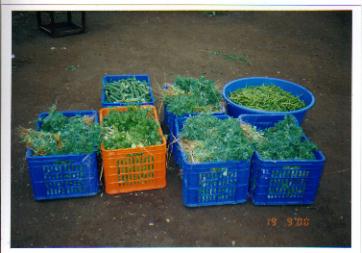 Presently the students have the basic study materials but the project has big plans of providing laboratories, libraries, audio-visual aids and other requirements for vocational training like motor-welding equipment for which a lot of funds are required. The students and villagers have thus taken up to horticulture to support the financial structure of the project. The 40-acre land is used to grow different fruits and vegetables like guavas, custard apple, mango, beans, tomatoes and much more. Last year the students grew and sold tomatoes worth one lakh, which went towards the school. Dr Snehalata Bhishikar of Jnana Prabodhini, Solapur says, It is indeed very fulfilling to see how the village which was totally destroyed and lived on different orthodox beliefs is transforming into an educational hub for village children in South Marathwada. But we have a lot more in mind, which includes civil construction work, and other for which we are short of funds. But we will continue giving support and working towards the project with all that we have.

Sayli Udas is pursuing a graduate degree in International Journalism at the University of Westminster, in the UK; this article is based on a visit to Solapur for a course-project.