Despite recent concessions to be subject to Right to Information Act, the Supreme Court's attitude to the sunshine law remains a matter of concern, writes Pradeep Baisakh.
25 September 2009 -

In an apparent climb-down, the Supreme Court agreed on 11 August 2009 to disclose information under the Right to Information (RTI) Act what action has been taken by the Chief Justice of India (CJI) on a complaint against some judges of the Allahabad High Court. Earlier, the apex court had declined to provide this, claiming that such information is not available with its official registry. Its reversal of that stand is a welcome change of view.

Nonetheless, the overall attitude of the Supreme Court toward the sunshine law continues to remain a cause of concern. In the most recent development where a single judge bench of Delhi HC ruled that office of CJI comes under RTIA, the SC is planning to appeal against the order in a division bench of the same court.

Don't look inside our house

P K Dalmia of Noida, Uttar Pradesh had sought information from the Public Information Officer of the Supreme Court on what action had been taken on three of his complaints made in 2007 and 2008 against the judges of Allahabad High Court on some matter of embezzlement. The PIO replied in negative as information relating to complaints against High Court judges were not part of the routine SC registry. Though such information was available with the 'office of the Chief Justice of India (CJI)', the PIO neither attempted to get it from there nor transferred the RTI application to that office. Dalmia appealed to the Central Information Commission (CIC), which ordered the PIO on 24 February 2009 to provide the information sought by him. At this stage too, the Supreme Court did not comply; instead, this order of CIC was challenged in the Delhi High Court.

During the hearing before the High Court, the Attorney General Vahanvati (appearing on behalf of the Supreme Court) agreed to provide the information sought. However, he maintained that he does not accept the correctness of the CIC's judgement on the matter. 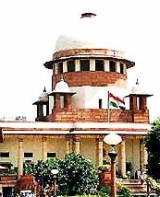 Even an order by the full bench of the CIC delivered in January 2009 could not change the Supreme Court's view on the 'personal capacity' of an office-holder.

•  Are judges over-reaching?
•  The balance of power
•  Contemptible but true

This case has similarities to the much-highlighted case of S C Agrawal, where the applicant had sought information from the Supreme Court whether any declarations of assets have been made by the judges of the Supreme Court and the High Courts to their respective Chief Justices, as expected under the resolution passed by the All India Judges Conference in May 1997. The Supreme Court declined to provide this information, arguing instead that the May 1997 resolution was an 'in-house mechanism'. Moreover, the court took the view that assets declared by judges to their respective chiefs, were given 'voluntarity', and received in the 'personal capacity' of the Chief Justices (implying, therefore, that they were not official documents subject to RTI).

Even an order by the full bench of the CIC delivered in January 2009 could not change the Supreme Court's mind on this - instead, the SC filed a writ petition in the Delhi High Court, and obtained a stay on the order. Since then, the CJI has reversed himself (see below).

Both these cases center around a key legal issue, namely, whether the 'Office of Chief Justice of India, in his capacity as Chief Justice not sitting in a Court" is subject to the application of Right to Information Act, 2005. The Information Commission's view was that the Chief Justice is a custodian of the information available with him, and that it is available for perusal and inspection to every succeeding office-holder. Therefore the information cannot be categorized as "personal information" even if the CJI holds it in his personal capacity.

The proposed legislation that rocked the upper house in recent monsoon session of Parliament was the "The Judges (Declaration of Assets and Liabilities) Bill, 2009". The bill apparently aimed at brining transparency to the functioning of the higher judiciary by providing for declaration of assets and liabilities by the judges. Under it the judges of Supreme Court would declare their assets to the Chief Justice of India (CJI) and judges of High Courts to the concerned Chief Justice, the CJI would be required to declare assets to the President. Judges failing to declare their assets (in 30 days time) or providing a false declaration would be deemed to be misconduct and misconduct is a ground for removal of a judge.

But clause 6 of the draft bill prohibits such declaration from being made public. This exclusion was vehemently opposed by most political parties, as well as some legislators from the ruling Congress. Parliamentarians termed such a move violative of the Constitution and the RTI Act. Arun Jaitly of BJP wondered why, if candidates contesting elections are to divulge their assets and liabilities under the constitutional provisions , why cannot the judges; and argued that there cannot be two interpretations of Article 19 that gives fundamental right to citizen to know. Brinda Karat of CPI-M said [the proposed Bill] violates the equality of all citizens, a basic feature of Constitution. Noted Constitutional expert and Rajya Sabha MP Ram Jethmalani termed it as a "conspiracy of corruption".

It would be pertinent to put here what exactly clause 6 of the bill reads. It says, "notwithstanding anything contained in any other law for the time being in force, a declaration made by a Judge to a competent authority shall not be made public or disclosed, and, shall not be called for, or, put into question by any citizen, court or authority, and, save as provided by sub-section 2, no Judge shall be subjected to any enquiry or query in relation to the contents of the declaration by any person."

The higher Judiciary welcomed the bill in its totality. Responding to the bill, CJI K G Balkrishnan said "We [the judges] welcome it. We only wanted it". Commenting on keeping the same information out of the purview of the RTIA, he said "We do not want the judges to be harassed."

Public statements have been issued from time to time by the CJI, who has been in forefront in advocating the view of keeping the higher judiciary out of the purview of RTI, e.g. "no self respecting judge will accept compulsory declaration" (05/02/2007, The Hindu), "The Chief Justice is not a public servant. He is a constitutional authority. RTI does not cover constitutional authorities" (20/04/2008, TOI), "We do not want the judges to be harassed." (26/07/2009, The Hindu) all of which are directly or obliquely concerned to the asset declaration case.

Since then, however, amidst views from some judges themselves that declaring their assets publicly is necessary, the Chief Justice has reversed himself owing to a unanimous decision taken by all the SC judges; now the Court will place the statements of assets on its web sites. Whether this amounts to accepting the jurisdiction of the RTI or if any action will be taken for non-declaration of assets, is unclear.

The second concern that bears examination is this: "will greater scrutiny of judges affect their judicial independence, or will scruinty become a tool of harassment by the public or by vested interests?". I think not.

The SC and the High Courts already enjoy numerous protections to ensure that they are not unduly pressured, whether by other branches of government or by the public. The Constitution provides that the CJI will be consulted in judicial appointments, that judges will have guaranteed tenure, their salaries are not voted upon, their conduct cannot be discussed in legislatures, and they have absolute immunity from civil and criminal proceedings for acts done in discharge of their official duties. They also hold the power of 'contempt of court' to protect themselves from any malicious criticism and to enforce implementation of their decrees.

All these provisions make the higher judiciary immune from interference from legislative or executive organs of the state and also from any individual. Eminent jurist Fali Nariman has rightly said "If only the judges had relied on the Constitution of India to protect them, as when they decide individual cases, and disgruntled litigants sometimes make allegations against them, they would have had no need for additional protection from government or from Parliament". Therefore any apprehension that judges would be harassed if their assets and liabilities are made public is only superfluous.

And among judges themselves, as we saw recently, there is divided opinion. Even earlier, progressive voices to include judiciary under the purview of RTI have come from former CJI J S Verma (January 2007) and the Parliamentary Standing Committee on Personnel, Law and Justice (April 2008).

The Judges Assets Bill would also, in all likelihood, be challenged in the courts if passed in its current form, and therefore it was wise that the government withdrew it for the moment. If the question of the constitutionality of the Bill were to be raised, it would have been uncomfortable for the justices to have sat in judgment of their own views. Instead, we now witness a compromise, by which the judges have agreed that their assets would be declared publicly on the SC's web site.

Pradeep Baisakh is a freelance journalist based in Orissa.