How they pulled their farm back from the brink

"Trying to measure the success of water harvesting only with increased water level is not fair. The vegetation improves, so does the soil moisture. Shree Padre reports on an arecanut farming family's success.
26 January 2010 -

We can confidently say that all these improvements are due to rain harvesting, hails Sripathi Bhat Kadakoli, an areca farmer from near Sirsi in Uttara Kannada district of Karnataka. The decline seven years ago was inexplicable, and so is the development now.

Just above their paddy fields is a small earthen tank filled with water. The seepage from this tank flows to the paddy fields situated below. This year, the rainfall is less, points out Sripathi, But for the tank, our paddy field would have been scorched. 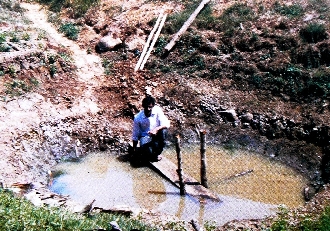 Five years ago, when I visited this farm, this tank was a small rain pit holding about thousand litres of water. Today, it is a tank that never dries.

Topography of the farm is very ideal for rain harvesting. All three sides are hills that slope down to this farm. The hills around belong to forest lands. But the canopy is not dense. Elder brother Diwakar Bhat and Sripathy have been picking up lessons of rain water harvesting one by one.

With an unbelievably low cost, they have succeeded in a big way.

It is this upgradation of the rain pit into a tank that Sripathi had termed as inexplicable. The magician of this magic is there in uphill, he points to the forest area and leads us there.

Instead of wasting the excavated soil from the pit, Bhat has cleverly raised a bund in the forest area. This has created a percolation pond that can hold about twenty five thousand litres.

From the tank, the percolation pond is about 50 metres away and on higher elevation. In between the two, there was a trench, dug to demarcate their land from the forest land. Both ends of this trench were plugged (blocked at a few places with earthen wall), to prevent runoff, thus making it into another groundwater recharge structure.

The forest started checking a considerable amount of run-off. This resulted in continuous seepage. The rain pit started retaining water till MarchApril. It started attracting wild animals like peacock, deer etc., because in the peak of summer, no water is available even in the nearby forest area.

Since a couple of years, the pit has completely turned into a live tank. Once this happened, it was widened to hold more water. Today just seven feet below the land level, there is good water. During last two years, they could give protective irrigation to the paddy by opening the outlet pipe. This year, according to Sripathi, they would be able to manage without openly flowing the tank water.

No to external water

This two acre paddy field is the rice bowl of Bhat family. As such, they have good attachment to these fields. In the beginning years, when they started rain harvesting, they felt that the quantity of water available to percolate in this rain pond isnt enough. To increase this, they came out with a plan.

A narrow channel was dug all along a kilometre length to bring the run-off from the distant hill. This external water was fed to the pond. Once the pit turned live, it used to be full at the onset of the monsoon. As such the import of water is stopped.

The Bhats own 15 acres of land. Out of this, four acres has the main crop - arecanut (betel nut). Coconut is grown in one acre. Till 1999, they didnt have any water scarcity. The deficit that started that year turned acute in 2002.

A big open well, their main irrigation water source, completely dried that year. Inter-crop of cardamom plants, vanilla vines planted previous year by spending Rs.5,000 dried up. That year, the garden that used to yield 20 quintals of arecanut per acre produced only 32 quintals in four acres, a whopping decrease of 60 percent.

As a last resort, they decided to dig a bore well. Even at 225 feet, there was only dust, no water. This prompted them to commission a geologist to conduct a survey. He shrugged off saying that there is no water in the whole belt.

By this time, Bhats have lost more than Rs.7-8 lakh Rupees due to crop loss. They had to cut down the expenditure drastically. A few farm workers were advised to go elsewhere. Most of the cows were sold.

With their last hope to retain the crop failing them, Bhats slowly made up their mind to sell the property. Three summers had driven them against the wall.

In the meantime, they were reading a series of success stories of rain harvesting in the Kannada farm journal Adike Patrike. They had their own reservations about the technique. But, as a last bid to retain their ancestral property, they decided to try this.

The vast forest area around was not worth the name. With only hand-counts of trees in the denuded forest, rain water used to run-off in a big way. During monsoon, it created a small stream in front of their house.

U turn by the forest department

The brothers got contour trenches dug at selected areas to check the run off. The trenches, one metre in breadth and 4-5 metre long had the capacity to stop and infiltrate 5,000 litres at a time.

Lower staff from the forest department (forest guards) objected to this. They wanted these farmers to refill all pits. Bhats argued that these are beneficial for both the forest and themselves. They challenged that they are ready to discuss this with their higher officials.

It so happened that in a couple of years the same department changed its attitude, say the Bhats. Take any number of pits. It is good for the forest. Now we have instructions to dig such trenches, they started saying.

The situation now is that you cant see much running water in whole of this land and surrounding forest areas. Every rainy season, Sripathi makes rounds in his land, checks where water runs and makes a blueprint for trenches. The tip he likes to share with beginners is: Make thorough advance planning. Where to stop the run-off, how big the structure should be, etc., are very important issues.

The rain harvesting initiative started in 2002 continued for another 2-3 years. About ten acres might have been treated. The total man days required for this was not more than fifty! A maximum of Rs.8,000 as per prevailing wage rate was spent. The brothers could notice some benefit just after one rainy season. Another percolation tank above their irrigation well had dried up in October 2002. The very next year, it retained water till December. Now none of his water bodies dry up.

Lakhs of litres of rainwater was being put inside the mother earth at the adjoining hills. After some time, Diwakar Bhat asked himself  why not tap some of the augmented water sources in their own land? With this objective in mind, they dug a open well inside their areca garden. It was a good success. 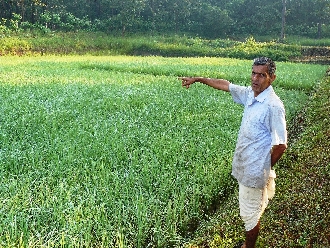 Their drinking water well is inside the house. Though it didnt dry in 2002, the water level almost touched bottom. Very next year, Bhats started diverting roof water into this well. Now the water level has come up considerably. They have stopped diverting the roof water now. Vast amount of recharge in upper hills has made the sea change.

Reminds Sripathi: That way if you see, trying to measure the success of water harvesting only with increased water level is not fair. The vegetation improves, so does the soil moisture. In the initial years, he was not that impressed with the results. On looking back now, he realises that there was good increase soil moisture that was then unnoticed by him.

The Bhats arecanut crop has reached its old productivity level again. With the increased availability of water, they are planning to start mulberry cultivation in one acre. They have already raised a nursery and kept the plants ready.

The Bhats feel bad about the vanishing percolation ponds, locally called tale kola. If tale kolas were retained everywhere, irrigation to areca gardens could have been considerably reduced. Now that their tale kolas have good water, Bhats are delaying the beginning of irrigation year by year.

The family keeps day today measurement of rain since the last three years. Though they are just 12 kilometres away from Sirsi town, says Sripathi, the rainfall here at their village is considerably lesser. While Sirsi enjoys 2500 mm, this village has to make do with 2000 to 2200 mm.

But we don't have any worry. If you put one bucket of water inside the mother earth, you can very well take out half a bucket, he declares. But story of many of the Bhats' neighbours are different. So much so that they have to do marriage ceremonies quite early in the season because there is water shortage for them in summer.