Dr. S S Kalbag has devoted 20 years of his life to educating the rural youngster, and found an enriching life for himself too in the process.
01 January 2003 - 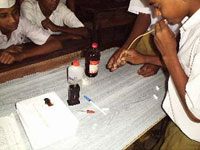 Rasika Dhavse is a Pune-based freelance writer, and a regular contributor to India Together.