The needs of today, hopes of tomorrow

There is a surprising hope in the most despairing places. It isn't often that many of us see this, but when we do, we are struck by the determination with which enormous deprivation is tackled by real heroes. Somnath Mukherji encounters the work of Tomorrow's Foundation in Kalighat, West Bengal.
28 March 2005 -

: Every year or two, we would come back to Kolkota from northern or northeastern India - where my father would be posted for his service in the Border Roads - to be with my grandparents and the rest of our big family. Still, in 36 years, I had never been Kalighat, where millions throng regularly to seek the blessings of Kali. Until this March. My first pilgrimage, however, was not to the temple itself, but to the slums where thousands live in tiny hovels in subhuman conditions.

My journey began from a building in Hossenpur near Ruby Hospital which houses the administrative office, a half-way home and an open school for Tomorrow's Foundation (TF), an organisation that started its activities in 1991 by providing non-formal education to the street children in the Kalighat area, on the terrace of Mother Teresa's Nirmal Hriday. Today, TF supports the educational, vocational, health and psychological needs of 400 underprivileged children.

The project director, Ashis-da, took me to a class preparing for the Class X examination in the open school system. These children had dropped out of school at various points in their lives, primarily due to financial constraints and unstable family conditions. The teacher, Kasturi-di, was sitting on the floor along with the students. Some had come back to school after a gap of 8 years, while some others after only a year. I asked Kasturi-di how she was teaching the same thing to such a heterogeneous group; she said that it was necessary to pay subtle individual attention to get a measure of the varying level of assimilation among the students. 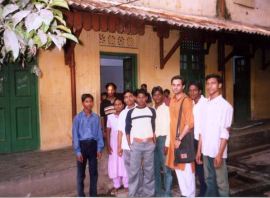 Students at the Foundation's open school.

There is never a shortage of concerns to be met. Today, a mother and son are waiting in the front porch with a suitcase and a bag. Their home is due to be demolished the next morning (March 2nd, 2005), in a planned eviction of 30,000 "squatters" near the Tollygunge railway station. TF has offered the bright teenager accommodation for a year at their halfway home so that he can finish his higher secondary education with minimal distraction. Ashis-da shows him his dormitory and other facilities - none of which have locks anywhere - and urges him to work hard and be an example for the younger children to follow. Cleanliness, ownership and good relations with others were some things strongly emphasized. The friendly yet firm message from Ashis-da is that TF would be there for all his needs within reason, but a good result in the higher secondary examination is expected of him.

The students who are already here have similar accounts of deprivation that led them to Tomorrow's Foundation. Biki, for example, was a student in the class who stood out because of his confident yet friendly demeanor. After he introduced himself, Ashis-da added that Biki had lived on the platforms of Sealdah railway station as a child. With TF's intervention, he was going to school and learning to drive a car and leading a relatively dignified life with his uncles. Equipped with a Class X certificate and a vocational skill, it was expected that the students could go out and make an honest living.

While this turnaround of fortunes is the goal, TF doesn't look away from the past these children bring with them. An extremely low self esteem is a usual problem with children who lead an uncared for deprived existence - Kasturi-di told me about one of the girls in the class who would not look into anyone's eyes - and acknowledging that past makes it easier to move beyond it. The children all know their own roots, and also how the TF itself works.

An extremely low self esteem is a usual problem with children who lead an uncared for deprived existence, and acknowledging that past makes it easier to move beyond it.

After a short visit to the ground floor where students were busy producing extraordinary handicrafts and greeting cards, I got into a car with the students from the open school and their teacher. We set off for Kalighat, where TF holds evening classes for younger children in a school run by the Kolkata Municipal Corporation (KMC). In my interaction with the students, I was touched by their interest in my life. I advised them that when they grow up and become established in their lives they should not forget the underprivileged people of the country - something my teachers had told me as a student. But my advice wasn't necessary, it turned out. The children have a memory of their own deprivation, and that is enough to remind them of their obligations. Biki responded in a determined voice that they would never throw away the part of their lives that had caused them so much pain and yet made them stronger.

At TF's office in Kalighat, Arpan-da, one of the main coordinators explained how the younger children are identified from the underprivileged communities of the six neighboring wards, and assisted in their admissions to nearby formal schools. TF has a cell which visits the homes of absentee children regularly in an effort to remedy the problems they face. This care is further supplemented by another cell which regularly visits the formal schools and get updates on the progress of the children. Besides these cells, there are trained teachers who coach the children in the evening and people who keep track of the children's health. They also have a computer training center at the office.

I requested Arpan-da to take me around some of the communities from where the children are drawn. We arrived on the banks of the Tolly nullah - a 30 to 40 feet wide canal whose water is black from the refuse of the city and gives out a pungent stench. Thousands of people have built up their shanties along this nullah. This is the economic edge of the city, the furthest these people could be pushed physically and socially. The tiny dwellings, hastily built with tin, jute bags and plastic, turn into ovens in the summer. The residents are rendered homeless on a regular basis during the monsoons when the acrid water, along with human and animal waste, rises to flood the places they call home. At those times the families end up on the streets, waiting for the waters to recede. The walkway between two long rows of houses is barely 3 ft wide; it is difficult to believe that people can live under these conditions year after year, and impossible to imagine that the children from these families were going to school and appearing for Class X examination.

Walking through the different bustees around the Keoratala crematorium, from where the unburnt human remains are cast into the nullah, made me understand the gravity of the work TF was doing. Arpan-da asked every student on how they fared on the Madhyamik (Class X board exams) history paper that day.

That evening, the municipal corporation run school was abuzz with activities since a free health check up was going on. The three doctors who were examining the long stream of children regularly volunteer their time and provide the basic vitamins that almost every child needs. A light tiffin is served to the children before they go to the classrooms to begin their lessons. Some of the teachers are themselves graduates of TF who have chosen to come back and teach there. Leaders and role models are being created in the community - a lack of which cannot be denied in our society. Like it is said, when you find a job you really like, you will work for less money and when you find your ideal job you will work for free.

There is a surprising hope in the most despairing places. It isn't often that many of us see this, but when we do, we are struck by the determination with which enormous deprivation is tackled by real heroes - like those at the Foundation. Seeing TF's work up close has been an emotional experience, and a blessing to me. Long after I have bid adieu to the people in Kalighat, my pilgrimage continues in my mind and heart.

Somnath Mukherji is an electrical engineer in Boston.