Despite the call by human rights organizations to stop the use of weapons such as pellet guns and chilli grenades in tackling riots or mob fury, security forces in the Kashmir Valley continue to deploy the same with impunity. This has led to debilitating injuries and even death, reports Freny Maneksha.
25 April 2013 -

“Killing us is better than making us blind.” This cry in total despair by a Kashmiri youth, who recently lost his vision, after a pellet gun injury, highlights the devastating manner in which seemingly “non lethal” weapons are continuing to be deployed in the Valley. In 2010 when security troops used pellet guns to quell protests and incidents of stone pelting, at least 45 youths suffered loss of vision because of pellet gun injuries, according to the Shri Maharaja Hari Singh Hospital in Srinagar.

Media reports estimate that in the current 2013 protests, following the execution of Afzal Guru, there have been at least 12 such cases of youths receiving very serious eye injuries with slim prospects of regaining vision. The youngest of them is a 13-year-old boy, Muzammil Qayoom Rather, who was hit in the eye as he stood at the window of his home in Baramulla district, North Kashmir. On 12 February, according to media reports, he leaned out of the window of his home in Sheeri to shout slogans even as protests were taking place in the streets below. He then received a hit in the eye by security forces who aimed at him. 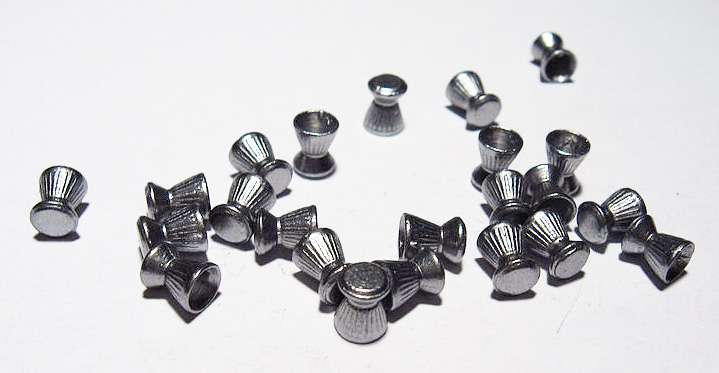 Air gun pellets can cause serious eye injuries and can penetrate the skin, bone and even internal organs. Pic credit: Wikimedia

It was also on 12 February that nineteen-year-old street hawker, Tariq Ahmad Gojri of Sheeri, Baramulla district, received a hit in the eye. Gojri told the media he had ventured out only to buy bread for the family. He adds that he was unable to seek proper medical attention because of the curfew that was clamped then. By the time he got to a hospital, the tiny pellets had spread through the eye. His entire eyeball had to be removed. Doctors say that these types of penetrating injuries cannot always be treated effectively in district hospitals. But, patients from remote districts are hindered from seeking prompt or timely medical attention because of the oft-prevailing curfew and also because, they say, security troops detain ambulances and vehicles ferrying the wounded.

It is this kind of deliberate and inappropriate use of non- lethal weapons that has evoked widespread criticism by human rights organisations including Amnesty International. Pellet guns, which use hydraulic force to pump hundreds of bullets, can cause widespread injuries across the body. When aimed upwards they can cause serious eye injuries. Besides piercing the eyeball, pellet guns can cause penetration of skin, bone and even internal organs.

One major problem for doctors and medical teams treating such injuries is that since the pellets come out in scores, it hits large numbers of persons in many parts of the body. In 2010 Dr Syed Amin Tabish, medical superintendent of the Sher-I-Kashmir Medical Institute (SKIMS) Srinagar, explained to this correspondent that pellet injuries necessitated a big team of doctors attending simultaneously to a single person who may have suffered hits in the head, abdomen and limbs.

According to media reports, at least three people died in March because acrid fumes of the pepper gas grenades used to disperse crowds in many parts of old Srinagar exacerbated their medical conditions.

•  Maimed by the state, quietly
•  A death in the family

In the same year a medical study on pellet gun injuries was brought out by SKIMS based on the 198 patients who were brought in with pellet gun injuries. The study notes, “Whilst the pellet wound itself may seem trivial, if not appreciated for the potential for tissue disruption and injuries to the head, chest and abdomen, there can be catastrophic results.” Significantly it observed, “Patients should be evaluated and managed in the same way as those sustaining bullet injuries.” The study cautioned that pellet guns should not be used unless extremely necessary and personnel using them may be better trained so that people do not receive direct hits.

Other “non lethal” weapons like pepper gas and pepper grenades (also called chilli grenades) have also been deployed in the latest round of turmoil in Kashmir. According to media reports, at least three people died in March because acrid fumes of the pepper gas grenades used to disperse crowds in many parts of old Srinagar exacerbated their medical conditions. Among them was a sixty-year-old woman from Bemina, named Hazira. Her family members say that on 8 March, a stray pepper grenade landed in her home which worsened her asthma. She died the next day. Another pregnant woman reportedly suffered a miscarriage after she stumbled and fell ill on inhaling the fumes. Whilst these grenades may be aimed at youths protesting on streets, the elderly and young children can be particularly vulnerable to the gas that engulfs the atmosphere, according to doctors.

A doctor at the Soura Institute of Medical Sciences in Srinagar told the press that while they did not know the exact chemical composition of the gas its effects were particularly lethal for people with acute asthma or allergy.

Uzma, a young woman told this correspondent that the intensity of the gas was such that its effects can be felt within a radius of up to three or four kilometres from where it is deployed. Your throat starts burning and itching and you can go on coughing violently for almost an hour and a half. The eyes start watering and this, too, continues for hours. It is really a horrific and frightening sensation.

The use of pepper gas and resulting deaths rocked the assembly and the opposition party, the People’s Democratic Party, staged a walkout on 11 March. The Jammu & Kashmir State Human Rights Commission castigated the police and state. In its order, it said the “state is duty-bound under constitution and law to protect the lives of the citizens and in no case are at liberty or have license to adopt such measures which would endanger the health of its subject in the name of maintaining law and order.”

On 21 March, Amnesty International told the government to suspend the use of pepper spray grenades until rigorous independent investigations have been carried out to assess its effect. It has also asked for a proper investigation into the cause of deaths of the three persons. Shashikumar Velath, programme director of Amnesty International India, said the J&K government and police departments have clearly not established any guidelines for monitoring the use of this gas and it is yet another example of “unregulated and excessive use of force by police in J&K.”

Use of pepper sprays is permissible in India and it has been marketed as an effective means of self defence, but it was the Defence Research and Development Organisation (DRDO) that in 2008 announced it would begin work on its use as a non-lethal weapon against terrorists. Scientists told the media that they would be using Bhut Jholakia, a chilly grown in the North East, that is recognised as one of the world’s hottest chillies. India’s Defence Research Laboratory rates it as having 855,000 heat units on the Scoville range (which makes it 400 times hotter than Tabasco sauce). These scorching chillies are used to make tear-gas like grenades. On ignition the oleoresin or thick, oily liquid which is absorbed in a composition reacts to liberate heat which evaporates and releases irritants in the atmosphere along with smoke.

The DRDO went ahead with its plans for such weapons even though Amnesty International and other organisations had declared that use of pepper sprays against peaceful protesters was “cruel, inhuman and degrading treatment.” It described the severity of its effects as “tantamount to torture.” Its use has been rejected in the United Kingdom because of potential carcinogenic properties.

In May 2011, according to a report in India Today, the Central Reserve Police Force (CRPF) placed an order for as many as 10,000 chilli grenades at a whopping cost of Rs 1.51 crore to be deployed in Kashmir to disperse mobs. Besides the CRPF, the UP state police last year applied to the ministry of home affairs to purchase these pepper grenades which had not yet been tested. Kashmir is the first state in India where these untested grenades are currently being deployed. Interestingly whilst defence personnel and the DRDO have on various blogs and websites held discussions on its efficacy for crowd control, there has been little evaluation of its lethal effects and the fact that its use on unarmed civilian populations is considered a transgression of human rights in many other parts of the world.