National waterways in need of a new course

The Centre gears up to take national control of the Kosi and Gandak rivers in north Bihar and turn them into commercial waterways, leaving many important questions unanswered or ignored. Shripad Dharmadhikary and the Manthan team report on findings from a recent visit to the region.

On 18 August 2008, almost exactly ten years ago, the Kosi river broke through its embankment at Kusaha in Nepal, close to the international border. Massive amounts of water raced through Bihar, causing one of the worst flood disasters in the state. The Kosi is prone to shifting course, and over the last 250 years, has shifted from east to west by about 112 kms. Since the 1950s, embankments have been constructed on both sides, constraining this shift. When the river broke through these in 2008, the gushing waters found and adopted one of its earlier eastern channels.

The river is now back to its earlier western channel, but is now in the news for an entirely different reason - one that causes some surprise given its behaviour in the past. The Government of India has announced that the Kosi river is to be developed as an inland waterway, where large ships and barges will carry bulk and other goods, offering an alternative to road and rail transport in the region. Along with the Kosi, another river of northern Bihar, the Gandak, which is very similar to the Kosi in its physical-geographical characteristics, is also slated for development as a national waterway.

In March 2016, Parliament enacted the National Waterways Act, 2016, declaring 106 new national inland waterways in addition to the existing five already declared ones. When Parliament declares a river or a waterbody as a 'national' waterway, it means that it will thereafter be controlled and regulated by the Central government rather than the state governments. This is done through the Inland Waterways Authority of India (IWAI). The IWAI has prioritised development of 13 of these waterways in the next few years. The Kosi (National Waterway 58) and the Gandak (National Waterway 37) are among these.

In April this year K P Sharma Oli, the Prime Minister of Nepal visited India and met the Indian PM. An "India-Nepal Statement on New Connectivity through Inland Waterways” issued after their discussions called for developing inland waterways to link Nepal to the sea through India. The Kosi and Gandak rivers, which originate from Nepal and meet the Ganga, have been the first choice for this plan that will link Nepal to the Haldia port through these rivers and the Ganga, which is itself notified as National Waterway 1. (see map). 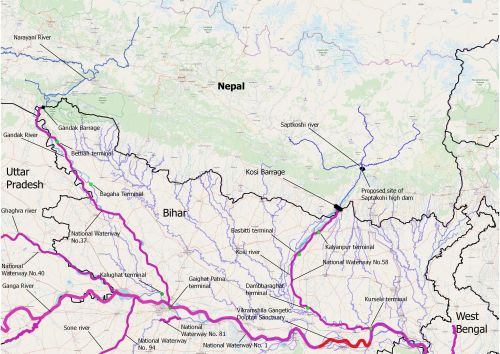 The Kosi and Gandak waterways link to the national waterway on the Ganga.

The Kosi waterway (NW 58) will be 236 km long in the Indian section, extending from Kosi Barrage at Hanuman Nagar on the border to the confluence of the Kosi with the Ganga at Kursela. The Gandak waterway (NW 37) is planned as a 300 km long waterway (Indian section) from Bhaisalotan barrage near Triveni Ghat at the border to the Gandak-Ganga confluence at Hajipur. Four terminals are proposed on each of these waterways.

At this point, vessels of 100 ton capacity are expected to ply on the waterways, transporting construction material, cereals/crops, conventional fuels like coal and firewood, chemicals, mineral ore etc. However, with plans to extend these waterways to Nepal, their lengths will increase and there is also some talk of developing the waterways further to be able to allow larger vessels - up to 600 tons - to ply.

But exactly where is the river?

There is, however, considerable doubt about whether all of this is do-able, or even if it's the right thing to do. While both the Indian and Nepali governments seem to be pushing these waterways in a hurry by carrying out quick surveys, serious concerns exist about the viability and feasibility of these waterways. Basic studies and assessments to understand them properly still remain to be done, and the few studies carried out so far do not inspire confidence that the concerns are being addressed properly.

The main requirement for navigation in a river is a channel of adequate width (2-3 m) and depth (25-60 m). In the case of most Indian rivers, such depths are not available all through the year, and also at different stretches along the length of the course, so these need to be created and maintained through dredging the rivers. However, as rivers keep adding sediments, these channels tend to get filled up, and dredging needs to be done on an ongoing basis. While such maintenance dredging happens in all waterways, these rivers are both known for their heavy sediment loads; shoals and sandbars are formed along their channels often, and hence the dredging will need to be quite frequent, leading to higher costs that could threaten the viability of the waterway.

Both rivers are also characterised by braiding and meandering patterns. The main channels and sand bars in the rivers are unstable and shift rapidly. This creates a lot of difficulty in navigation, as the depths at different points in the changing channel need constant monitoring. Shifting channels could also cause problems with related infrastructure like terminals, which are fixed at one place. When the Manthan team visited the location of proposed Kursela terminal on the Kosi river, we observed that while at the time of the survey a few years back, the terminal was shown to be on the river channel then, in the intervening years the channel has shifted more than 500 m, leaving the terminal location literally high and dry.

The engineering and maintenance costs associated with managing such fluctuating courses can be quite high. But there's worse - both rivers, as noted earlier, have repeatedly shifted their courses in the past. In spite of engineering interventions like embankments, the risk of course-changing remains. This creates problems similar to channel migration, but on a much higher scale. We could find, years after constructing a terminal, that the river doesn't flow anywhere near it anymore!

The Detailed Project Reports (DPRs) of both the proposed waterways are woefully inadequate in suggesting measures to address these serious problems. The reports mention the need for contnuous inspection of channels, and also the rapid shifting of channel markers as well as bifurcation points in the channel, but these are nowhere near as detailed as they need to be. An experimental solution - using the dredged material for providing the guidance to the flow of these rivers - is also proposed. There is a strong impression throughout the reports that the actual plan is to respond to events post-facto, without serious anticipation of them at the planning stage. Miscalculation of events, risks and costs is almost certain in this approach.

The DPRs also totally lack any analysis of environmental and social impacts. Both rivers are rich in biodiversity, and among their fauna are the Gharial, and the Gangetic Dolphin - India's national aquatic animal. Dredging is likely to destroy their habitats, and impact fisheries everywhere, in turn impacting the livelihoods of local people. None of these aspects has been studied properly yet. An Environment Impact Assessment (EIA) is said to have been done for the Gandak waterway, but it is not in the public domain, and there does not seem to be any EIA yet for the Kosi. The secrecy and silence only adds to the impression that these factors are being ignored.

For local communities along the rivers, all of this is no more than a diktat by which they must abide. Those who are likely to be  affected have not even been informed about the project, let alone being consulted. Similarly, there is a complete lack of any debate and discussion with the involvement of the civil society and independent experts. While the waterways are touted as 'development projects' for the people’s benefit, the people themselves are nowhere to be seen in deciding what is beneficial and what is not.

While ignoring local people is routine in development projects in the country, ignoring governments is less so. Yet, it appears that even the Bihar government’s serious concerns about the project are not being addressed. The state government has raised a warning flag to the project, citing the likelihood of high siltation. At the recent East India Climate Change Conclave held at Patna on 23 June, Chief Minister Nitish Kumar stated that the waterways projects will not succeed unless the problem of silt deposits is addressed. Earlier, the state government had also pointed to the likely impacts of dredging.

In the case of the ongoing work for the arterial waterway - National Waterway 1 on the Ganga - things are also coming to a head. The Declaration issued at the Aviral Ganga Conference organised by the Bihar Government in February 2017 states, "Dredging for National Waterway 1 is increasing erosion in Bihar. The project should be put on hold until a scientific study of [the] impact of dredging on erosion is done." These concerns equally valid in the case of the Kosi and Gandak too. But thus far, the Centre has chosen to ignore them.

What is clear is that a lot of money is proposed to be spent in the Kosi and Gandak waterways, but beyond this there is much vagueness. It's not clear if the costs of the waterways would become prohibitive, leaving them unused. And that too after causing significant social and environmental impacts. What would be better is to proceed with much more caution.

In this situation, Manthan suggests carrying out proper and comprehensive studies on siltation, the changing course of the rivers, the unstable channels, and the impacts of waterways on ecology and local livelihoods. These should be done before any further work is undertaken. Studies should also explore alternatives, which build on the existing navigation to develop water transport with minimal intervention, using the natural flow and depths of the rivers. Last but not the least, using these studies, widespread and extensive informed discussions should be carried out that involve the state and central governments, local people, civil society groups and independent experts to try and evolve a consensus around these waterway projects. Only if such a consensus decides to go ahead with the projects should these be taken up.

The changing course of these rivers and the ecosystems they support should be a signal to us - to alter our thinking about these waterways themselves.