Politics, through the eyes of Bihar’s Dalit students

Initiatives under the ‘My Space My unManifesto’ campaign to bring about a political reawakening and engagement among Dalit youth have led to a new-found consciousness and perspective among them. Manisha Prakash reports.
12 February 2014 -

Not too long ago Ashok Paswan, a BA Part I student of R. Lal College in Lakhisarai district of Bihar believed that politics was “evil”; a platform where the corrupt and power hungry got together to cheat innocent people of a life, a future. Today, this young Dalit boy has been forced to change his views. He has understood that it’s not politics that is evil, but the people who have brought about a rot in the system.

In fact, he now firmly believes that in order to ensure change, ordinary citizens will have to step forward and ask for clean governance, better enforcement of law and order, and more opportunities to secure themselves and their families economically.

“In order for Bihar’s sizeable Dalit population to register its presence in the corridors of power, three things have to be done – people need to put up a united front, clearly place their demands before leaders and stand firm against all those who think it is okay to ignore them and push them away from the mainstream. It’s only by taking collective decisions for ourselves that we can make politicians realise that we are no longer fine with being taken for granted as a vote bank,” states Paswan emphatically.

What is it that has transformed this passive, cynical bystander into a proactive and vocal member of a community that has faced social discrimination and oppression for generations? Of late, Paswan has been attending some inspiring interactive sessions being conducted by members of the Bihar Ambedkar Students’ Forum (BASF), a state level federation of Dalit and Adivasi students, as part of the ‘My Space My unManifesto’ campaign that is underway in 15 states of the country.

The idea behind this movement is to reach out to young people of diverse identities and put together a distinct youth manifesto that takes note of their aspirations during the 16th Parliamentary Election.

‘What is your definition and understanding of politics? Why do you need to be involved in the local political process? What is caste? What role does it have to play in electoral politics?’

These are some of the questions that the BASF is posing to young Dalit women and men across six districts of Bihar. As they search for answers, they are forced to seriously reflect on contemporary politics, so that they can keep all the relevant issues in mind when they vote. 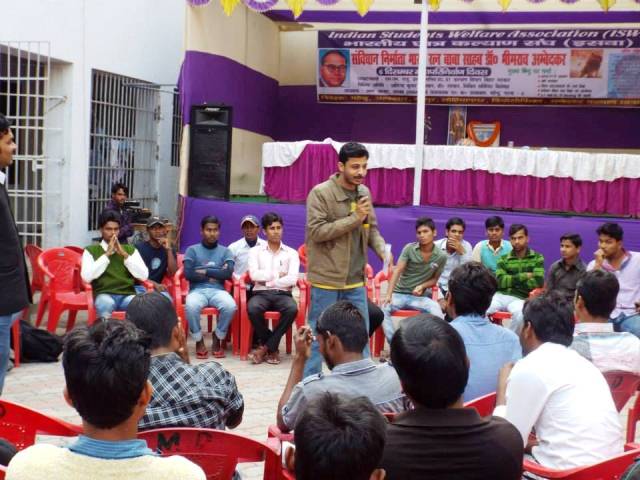 With the support of the Patna-based Centre for Social Equity and Inclusion (CSEI), the BASF plans to motivate thousands of college-going Dalit voters in Patna, Nalanda, Jamui, Rohtas, Bhagalpur and Begusarai. Additionally, they are also holding meetings in 152 Dalit welfare hostels.

Traditionally, Bihari youth has been the driving force behind many defining political mobilisations. In fact, student politics over the decades has given rise to some of the most charismatic leaders that the country has known, be it the iconic Jayaprakash Narayan or the present chief minister of the state, Nitish Kumar. Unfortunately, though, young Dalits, who currently make up half of the 16 per cent of Dalit population in Bihar, still have a very long way to go in terms of playing a significant part in state politics, although this by no way means that they are ignorant of the political processes.

The BASF has, through the UnManifesto campaign, been attempting to change the negative perceptions or inhibitions they may harbour and encourage them to actively engage with their local leaders and vote on the basis of issues and manifesto promises.

When the conversation on increasing their involvement in electoral politics first began, there were many who expressed skepticism as they spoke about hopes that have remained unfulfilled. On the question of their understanding of politics, the answers these young participants gave were interesting but predictably pessimistic.

Sample some of the statements:

“Politics is about running the family, society and country, but there is no space for sharing the truth”;

“Politics is poison, a lie”.

Some were able to differentiate between ‘good’ and ‘bad’ politics – but in rather simplistic terms: “good politics is all about development, while bad politics leads to disastrous consequences for everyone”.

According to Satyendra Kumar, Director, CSEI, “General corruption at different levels in society has made the Dalit youth in particular very cynical about politics, which is why at first they rejected the idea of participating in a discourse centred on politics.” Nevertheless, continuous discussions with these students over the last few months have slowly started to bring about a different outlook.

Like Paswan, Mustaq Alam, a student of Patna University, used to avoid talking about politics. He was convinced that there simply was no point in “wasting time over it” when it could not enable people like him to make their lives better in any way. Scams, money laundering, and “goonda raj” – that is what he associated politics with.

“But I have come to realise that sitting at the fence will not yield any concrete results. The youth have to enter the fray and take charge in steering society towards better things. I do, however, believe that education and politics cannot go hand in hand. It would be suicidal to quit studies to become completely entrenched in matters of governance. That’s why a campaign like ‘My unManifesto’ is so perfect. It helps us to voice our demands and ensure that they are fulfilled by voting responsibly,” says the confident young man today.

Alam cites the example of the recent victory of the Aam Admi Party in Delhi and is convinced that young people have the capacity to bring about change.  “At a time when new leaderships are emerging and new ideas are being tested, it is no longer possible to overlook half of India’s population, which is below 25 years of age,” he adds.

So what do the young Dalits of Bihar want from their political leaders? Education and job security are a priority for boys; for girls, personal safety comes first. Whether it is 21-year-old Neha Kumari of Hilsa in Nalanda district, or 22-year-old Sugandha from Patna, they both want an assurance that crimes against women will be dealt with through exemplary punishment.

Says Sugandha, “No political party manifesto can afford to ignore this subject any longer. There has to be zero tolerance when it comes to rape, acid attacks, molestation, sexual harassment.”

These are truly transformative times for young Dalits. What has enthused them is the fact that, for the first time, there is an interest in knowing their thoughts and opinions on issues like education, livelihood, rights and exclusion. The workshops have witnessed lively debates on the social and economic challenges they collectively face and from these sessions certain key ‘promises’ have emerged that will definitely find their way into the national youth manifesto.

As Uday Thakur, a student of ITI, Patna, puts it, “Had it not been for this campaign I would never have know how to use laws like the Right to Education or Right to Information; I would never have had the opportunity to recognise the power that a group of people have if they know how to exercise it.”  (© Women's Feature Service)

Manisha Prakash is a senior journalist writing on development issues from Patna. This article has been published in arrangement with the Women's Feature Service.(www.wfsnews.org)