At one with nature while learning about wildlife

Have you ever wondered how forensic scientists help bring poachers to trial? Or how it feels to walk in forest land for three hours amidst torrential rain? The exhilarating experience of wildlife conservation comes alive in a course for enthusiasts. Deepa Mohan recounts her experience.

One of the problems of age is that most people seem to feel that nothing more can be learnt. Most courses have a cut off age of 35, in fact! So when I applied for the Course in Wildlife Conservation, conducted by the Wildlife Institute of India (WII) in Dehradun, Uttarakhand, I booked my train tickets in preparation, but was fairly sure I’d get rejected for my age (61), as usual. So it was a pleasant surprise when I was selected for the course!

This 10-day course is for wildlife enthusiasts who are not professionals in the field, and who would like to learn more about the “big picture” of wildlife conservation efforts, and challenges, in India. 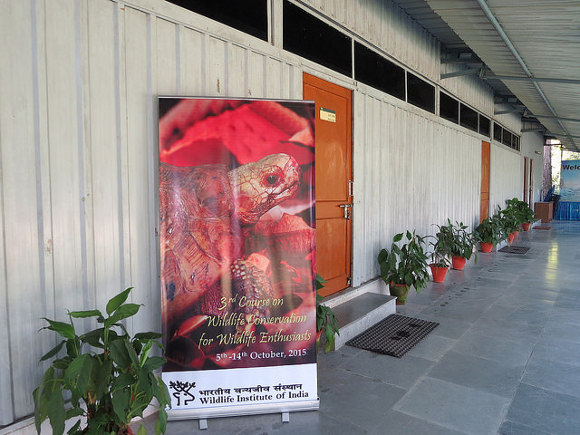 Two batches had already been conducted, with a batch strength of 20 each; this time, the strength was just 9 people, which was quite a challenge for WII, as the logistics work better with a full class strength. However, thankfully, the course was conducted as planned.

Three of us were travelling to Delhi together, two of them from Bangalore and one from Mysore. In Dehradun we met another enthusiast from Bangalore. Two avid bird photographers were from Ahmedabad, two ladies who work in the wildlife sector, mainly in Madhya Pradesh, were from Mumbai. One young lady was on deputation from UNESCO.

The small group made for very good bonding between us, and this was much encouraged by our Course Director, Dr Suresh Kumar. I talked to him about how the course was conceived and designed. “The governing body of WII felt that all courses were only aimed at wildlife professionals, and that the Institute should start addressing non-professionals who were keen on wildlife,” he says.

The first course was held in February 2012, and the second in October 2013. “In 2014, because of various constraints, we could not offer the course, and we offered the third course  in October 2015.” he says. Dr Bivash Pandav was the course director at the time.

“This time, due to various factors, including some people dropping out, the participants were only nine, as compared to twenty each for the first two courses. However, this meant that I, as the new course director, had a lot of interaction with the participants!” he smiles.

Certainly Dr Suresh took a lot of trouble with all of us. Getting alternative rooms for lectures when the regular venue was otherwise occupied, answering all our questions in both the classroom and the field, giving us plenty of material for further reading and research, juggling the sessions of various faculty members, guiding the group during the long walks in the hills, making sure all of us were together and not straggling behind and above and beyond the call of duty, taking us to the Mindrolling Buddhist monastery in Dehradun, and even getting us rasmalai from a special sweet shop! He is also a great raconteur, and his tales of the time that he spent researching the Himalayan Monal in remote Kedarnath, had us all riveted. 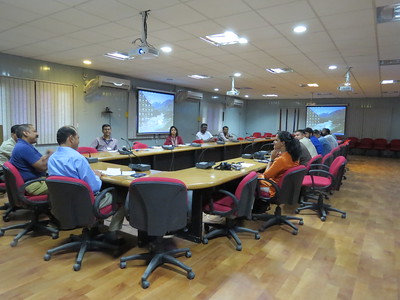 One of the classroom sessions. Pic: Deepa Mohan

The course fees were earlier subsidized at Rs. 15000; but for our batch, by Murphy’s Law, the subsidy no longer applied and it cost Rs. 30000. However, I’d still say it was worth the expense.

We had five days of “classroom” sessions on topics that had the common thread of wildlife conservation, yet varied widely. One riveting session was about  how to tell fake from real wildlife artefacts, and how wildlife forensic scientists test material and help bring poachers to trial; another talked about the endangered fishes in Indian rivers; we had a session on how resettlement of tribal communities in the forests affects the landscape, one on saving the tiger in a human-dominated landscape and so it went. 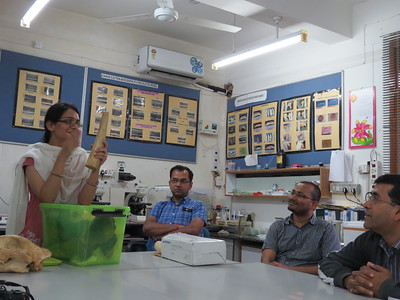 Each session would ideally have been followed by discussion, but unfortunately, this was not always possible. The faculty who addressed us were not “armchair” forest officers; each of them has done immense research in the forests in their lifetime, and in trying to condense their knowledge into a lecture of an hour, many of them overran their times, causing the director of the course to have to juggle things around in order to ensure that all the sessions were held! In fact, one gentleman went on so long with his introduction that he didn’t get to the main topic (snakes) at all, and had to wind up after an hour!

However, the information imparted and the knowledge shared was enough to keep us totally absorbed. Some great visuals supplemented each learning session.

The field trip was also for five days, and we drove up to the Lansdowne Forest, and walked from Saneh to Koluchaur (“chaur” means grassland) , then to Chaukham, and back. Each day of walking through the forests, crossing the Kolu river at many points, looking at all the wonders Nature had to show us. It was an immensely educative experience, and it bonded the group tremendously too. 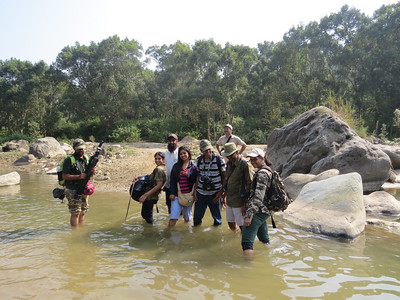 Crossing the Kolu river on one of our treks. Pic:Deepa Mohan

I cannot forget one walk of about 9 km (back from Choukham to  Kolu) where we were hit by a torrential downpour, and walked for about 3 hours through sheets of falling water and marble-sized hailstones!

We learnt applied botany, geography, geology, zoology, it was a rainbow-spectrum of practical learning. Imam, a Gujjar herder who is now a resource person for WII, was on hand at every step, sharing his deep knowledge of the landscape to which he belonged.

“I immensely enjoyed the program,” says Raja Bandi, who took the program (2nd batch) in October 2013. “I took the course because I wanted some exposure to wildlife conservation from the scientific and research angles.” He adds that their batch were taken to Laldhung and Ravasan areas in Rajaji National Park (as were the first batch). Now that the number of people who’ve taken this course has hit 50, he is exploring the possibility of starting a common platform for them, working with WII.

Another highlight of the field work for me was going to a settlement of Gujjars, the once-nomadic tribe that still inhabits various places in the Lansdowne Forest areas. 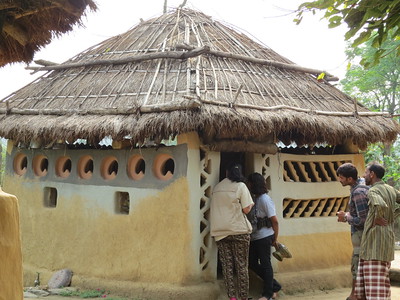 Interacting with the Gujjars. Pic:Deepa Mohan

To meet these people, see their still colourful lifestyle, and accept a glass of salted buttermilk from them, was very interesting for all of us. Increasingly, the people indigenous to a forest landscape have to be “re-settled” when they start over-grazing the land or over-farming it, and we got an insight into their lives and troubles. 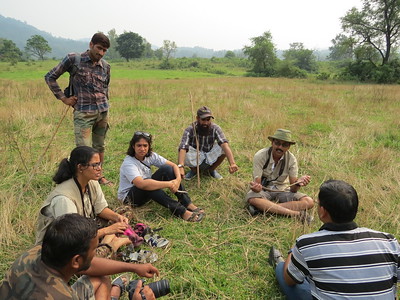 Suresh and Imam (wearing a hat and cap, respectively) talking about the Gujjars at Koluchaur. Pic: Deepa Mohan

For Bhavna Menon, who works in an NGO,  predominantly in the Madhya Pradesh belt with such communities, this course was a welcome way to learn more. “When  my colleague Vidya told me about this course, I signed up, too,” says Bhavna. “Walking through Corbett country” and “hearing the tiger’s call” were two of the highlights for her.

“Another major highlight was meeting so many like minded people who care about the environment and its issues,” she says, and I must add here that my fellow-participants added considerably to both my enjoyment of the course and my learning from it. And help was often the most immediate kind. During the field trip, we had to cross several streams, and I took the help of many of my newly-found friends over the rocky, rolling boulders!  Indeed, I called Bhavna my “river daughter”!

This, then, is a wildlife conservation course I would unhesitatingly recommend to all those who are interested in the natural  treasures our country has, and the challenges we face in protecting them. The course certainly helped me understand that while the difficulties and obstacles (human encroachment and poaching being two of the major ones) remain, the picture is not gloomy, and with determination and a strong game-plan, even non-professionals can do their bit to save our wildlife from sliding into extinction.